We’ve seen tremendous growth in the entry-level SATA and premium NVMe SSD segments over the last year. The middle ground has gone relatively untouched, but it is far from neglected. The mid-range has consolidated and now includes the SATA SSDs that we previously considered premium products. Toshiba’s OCZ division has historically enjoyed a lot of success in this area, and it is looking to take the segment back with the VX500.

Today’s SSD market is a crowded place with plenty of options for everyone but there is a sense of stagnation within it as well. While there’s no better time to be looking for a mid-range drive, the high end has been largely unmoved due to a lack of suitable interfaces. Motherboard manufacturers put their eggs in the SATA Express basket but thus far the actual storage manufacturers themselves have shunned that standard and have moved beyond SATA completely. First it was Intel’s 750 series, then Samsung’s 950 Pro, and now OCZ and by extension Toshiba are planting their feet in the NVMe space with the new RD400 series.

OCZ Storage Solutions today launched the Trion 100 series of Solid-State Drives (SSDs) that are the company’s latest value-oriented storage option for those wanting an affordable SATA III SSD. The OCZ Trion 100 series is an all Toshiba solution that features a Toshiba TC58 SSD controller paired with Toshiba A19 2D planar Triple-Level Cell (TLC) NAND flash. TLC SSDs have been made popular in recent years by Samsung and SanDisk as they have been shipping TLC drives in volume on their entry level drives. TLC memory is more affordable to manufacture, so the drives on the market utilizing TLC NAND Flash memory have allowed for lower SSD pricing. TLC NAND Flash memory is less durable than Multi-Level Cell (MLC) memory, but when parred with the proper controller that has error-correcting abilities it has been proven that TLC NAND is acceptable for use in consumer SSDs. Now that OCZ has a TLC SSD solution they should be better able to compete with the big name brands when it comes to pricing.

Kingston Technology, one of the leaders in the industry has been rather well known for its previous HyperX 3K Series Drives. But as most already know, Kingston started to branch out its HyperX line up to its own brand as of the recent years and the HyperX brand has grown substantially. With this in mind, we are going to be looking at one of these new SSD Drives part of the Savage Series from HyperX.

Since we heard that Intel ‘August Ridge’ SSDs would ship in PCIe form, with speeds exceeding 1000MB/s, we’ve been eagerly waiting for their return to the enthusiast desktop market. The company is now ready to deliver on the promise with its first PCI Express Gen3 x4 solid state drive, officially known as the Intel SSD 750 Series.

OCZ has been teasing the Vector 180 for quite some time now. The first hint of the drive was unveiled over nine months ago at Computex 2014 where OCZ displayed a Vector SSD with power loss protection, but the concept of ‘full power loss protection for the enterprise segment’ as it existed back then never made it to the market. Instead, OCZ decided to partially use the concept and apply it to its new flagship client drive that is also known as the Vector 180.

Storage company Plextor has experimented with producing solid-state drives (SSD) using various form factors. SATA remains the overriding favourite even though it’s limited in terms of interface speed, but Plextor has also released drives using the M.2 and PCIe form factors. This hybrid approach leads to the M6e drive mating a Marvell 88SS9183 controller with Toshiba NAND connecting to the system either via the bare M.2 drive or via AHCI-compliant PCIe through the use of an adapter card. Selecting the older AHCI standard enables Plextor to get the latest M6e Black Edition out to retail quickly without having to wait for the controller manufacturer – in this instance Marvell – to qualify NVMe drives, though such support is coming soon.

Need a blistering fast portable USB 3.0 Flash Storage unit? Hey, join us as we review the Samsung T1 Portable SSD. It is a cute and tiny USB 3.0 storage unit weighing in at just 30 grams. Our 500 GB Test sample reached speeds well over 400 MB/sec in read and write performance. If you are on the move, this great looking device might just be what the doctor ordered!

G.Skill hasn’t been a very visible SSD OEM lately. Like many DRAM module companies, G.Skill entered the market early around 2009 when the market was very immature and profits were high, but lately the company has more or less been on a hiatus from the market. Even though G.Skill has had an SF-2281 based Phoenix III in the lineup for quite some time, it never really did anything to push the product and a Google search yields zero reviews for that drive (at least from any major tech review outlet). However, back at Computex this year G.Skill showcased a prototype of its next generation SSD: the Phoenix Blade. Unlike most SSDs on the market, the Phoenix Blade utilizes a PCIe 2.0 x8 interface, but unfortunately it is not the native PCIe drive many of you have been waiting for. It is driven by four SandForce SF-2281 controllers in a RAID 0 configuration. It makes sense for G.Skill to pursue the ultra high-end niche because the SATA SSD market is currently extremely populated. It ends up being close to impossible for the smaller OEMs to compete against giants like Samsung, SanDisk and Crucial/Micron while being profitable, since ultimately the NAND manufacturers that are vertically integrated will always have a cost advantage. 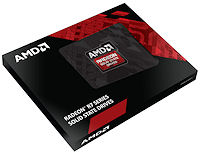 AMD is calling the new family of drives, the Radeon R7 Series SSD, similar to its popular mid-range line of graphics cards. The new Radeon R7 Series SSDs feature OCZ and Toshiba technology, but with a proprietary firmware geared towards write performance and high endurance. We’ll give you the full scoop on the pages ahead, but first let’s take a look at the Radeon R7 Series’ specifications. If you’re familiar with some of OCZ’s higher-end drives (namely the Vector 150), some of these specs will probably ring a bell…