NVIDIA has launched its new Geforce RTX 3070 Ti graphics card. The review embargo has been lifted, and we have gathered together a number of reviews on the Founders Edition and various custom cards from different manufactures. Here’s a bit from NVIDIA:

NVIDIA has released the GeForce 466.77 WHQL software. The drivers come with support for the GeForce RTX 3070 Ti graphics card. Also added is support for the DLSS feature in “No Man’s Sky,” with its latest patch. The drivers also provide optimization for “Sniper Ghost Warrior: Contracts 2,” “Chivalry 2,” “The Persistence,” and NVIDIA Reflex support for “War Thunder” and “Escape from Tarkov.”

A handful bugs were also fixed. For starters, a BSOD error with “DPC Watchdog Violation error” occurring on NVIDIA “Kepler” and “Turing” GPUs, has been fixed. System freezing when launching a VR game on machines connected to 4K UHD TVs, has been fixed. 4K @ 120Hz display mode not being available on RTX 20-series, GTX 16-series, and GTX 10-series; has been fixed.

You can download the GeForce 466.77 WHQL drivers via GeForce.com.

NVIDIA has released the GeForce 466.63 WHQL software. These drivers introduce support for the recently announced GeForce RTX 3080 Ti graphics card, which we reviewed here. The drivers also introduce optimization for “No Man’s Sky” DLSS update, NVIDIA Reflex support for “Escape from Tarkov,” “Sniper Ghost Warrior Contracts 2,” and day-zero optimization for “Chivalry 2.” A couple of issues are also fixed. A bug that caused the system to hand when connected to a 4K UHD TV and launching a VR game, has been fixed. 4K @ 120 Hz not being available to machines running GeForce GTX 16-series and 10-series graphics cards, has been fixed.

You can download the GeForce 466.63 WHQL drivers via GeForce.com. 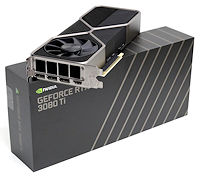 NVIDIA has launched its new Geforce RTX 3080 Ti graphics card. The review embargo has been lifted, and we have gathered together a number of reviews on the Founders Edition and various custom cards from different manufactures. Here’s a bit from NVIDIA:

AMD has updated its Radeon Software Adrenalin 2020 Edition version 21.5.1 drivers, bringing many features on board as well as fixing a lot of issues that have appeared in the past. Starting with support for the Resident Evil Village PC game, AMD promises to deliver up to 13% better frame rate at 4K maximum settings, while using the Radeon RX 6800 XT graphics card. The comparison was conducted with a reference to the previous driver, 21.4.1, which didn’t allow the card to reach as high FPS as it is now possible with the proper support for the game. Another game that is added to the support list is Metro Exodus PC Enhanced Edition. Some fixes have been implemented, as the incorrect performance metrics that may have incorrectly reported temperatures on Ryzen 5 1600 series processors.

The drivers also confirm the existence of a new hardware revision of the GeForce RTX 3060 12 GB graphics card, which will be generally available from mid-May, 2021. These cards will require at least GeForce 466.24. The revision will likely come with a different device ID from the original RTX 3060 12 GB, and will re-engage the hash-rate limiter. Read more about this card in our article from earlier this week, here. A handful bugs were also fixed. These include performance issues related to NVIDIA Reflex and Rainbow Six Siege; an artificial FPS cap when V-Sync is off on displays connected via HDMI 2.1; and an application crash with RigidGems Prepar3D.

You can download the GeForce 466.24 WHQL Game Ready drivers via GeForce.com.

AMD has released the Radeon Software Adrenalin 21.4.1 drivers, which introduce major updates to the soft-product that completes your AMD Radeon graphics cards. The drivers come with updates to the Radeon Software interface, and the AMD Link remote-gameplay utility. Radeon Software now comes with an improved installer with installation presets that let you choose between a Full (typical) installation, with all software features installed; a Minimal installation with an interface that only has basic settings related to the display and GPU; and “driver-only” that only installs the display driver, and no additional software.

There are several new features introduced within Radeon Software. Vivid Gaming Display Color Enhancement is a new monitor color profile that enables a more “vivid” color palette that lets you liven up “color deficient” scenes. The interface lets you take control of protanopia, deuteranopia, and tritanopia components of the color. The search bar that lets you dig through the hundreds of features, has been improved. There are many other minor UI improvements, such as stats in the Games tab, a toggle for the in-built web-browser, and global controls for the hotkeys.

NVIDIA has released the latest version of GeForce Game Ready drivers. Version 466.11 WHQL comes with optimization for “Mortal Shell,” including support for raytracing and DLSS. The drivers also add NVIDIA Reflex support for “Valorant” with its latest patch. The drivers also integrate NVIDIA Broadcast noise reduction feature into OBS. The list of monitors with support for NVIDIA G-SYNC grows, with the addition of LG’s 2021 G1, B1, C1, and Z1 series monitors; and the MSI MAG301RF.

You can download the GeForce 466.11 WHQL Game Ready drivers via GeForce.com.

You can download the GeForce 465.89 WHQL Game Ready drivers via GeForce.com.

AMD today released the Radeon Software Adrenalin 21.3.2 beta drivers. The drivers come with optimization for “Outriders,” “Evil Genius 2: World Domination,” and the DirectX Raytracing update for “DiRT 5.” A handful issues have also been fixed. Radeon RX 6700 series GPUs incorrectly reporting clock speeds in the Performance tab of Radeon Software, has been fixed. Artifacts noted with shadows in “Insurgency: Sandstorm,” has been fixed. A bug with desktop resolution changing after a power cycle, on certain displays, has been fixed. Screen blacking out when playing games in the borderless fullscreen mode with FreeSync enabled on RX 6000 series GPUs, has been fixed.