The conflict that sees Saudi Arabia facing Iran explodes once again. One of the Iran’s marine ships returns fire after it has been attacked by a Saudi force.

While both sides refuse to take responsibility for what happened and the truth will never be known, the situation goes out of control when the Iran decides to retaliate against the Saudi Arabia for its behaviour.

Both nations’ weaponry, military and navy forces have advanced considerably during the last few years, and both sides’ objectives are clear: to strike at the enemy’s economic heart, the oil infrastructures.

The rest of the world can only stand by and watch as the war arises.

Command LIVE: Black Gold Blitz is the latest expansion of the Command series that will bring you in the Middle East, for one of the bloodiest battles of modern times.

This November, the 7th you will have to choose one side and lead it to victory!

The time is finally here. You’ve seen 3D Xpoint for the enterprise in our Intel DC P4800X review, and you’ve seen it as a fast cache for the desktop in our Optane Memory Review. But this is the form you’ve really been waiting for: A bootable 3D Xpoint SSD for the desktop. The Intel Optane 900p. Purportedly the fastest consumer SSD known to mankind. It has arrived, and it’s time for us to review what promises to be a massive generational shift in consumer storage. 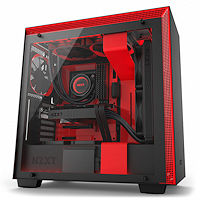 We review the NZXT H700i Mid Tower PC chassis. A nice design chassis with tempered glass and RGB LED lighting + CAM control unit and refined features with the ability to hide your components inside the chassis. NZXT has been around for years, building an ongoing reputation with mostly their controversial chassis designs. It all really started with the Guardian chassis years ago and have ever since put numerous chassis designs out on the market. Rising from the ashes of their crafted series is the Phantom 630 full tower chassis, absolutely impressive in many ways as the design is simply great, the features are grand and then the extras still need to kick in. What about a digital fan controller connected to a plethora of pre-equipped fans?

AMD released the latest version of its Radeon Software Crimson ReLive Edition drivers. Version 17.10.3 fixes two major issues that are affecting RX Vega graphics card owners in particular. The problem with The Wolfenstein II: The New Colossus game client crashing or hanging upon launch has been fixed. So does the other issue involving the Destiny 2 client’s instability when the user is playing the sixth mission on the single player campaign.

With Call of Duty: WWII set for release on November 3rd, Sledgehammer Games and Raven Software have announced updated specifications on PC, and numerous key updates after the open beta period. And remember that the Call of Duty: WWII Pre-Download has already started on Steam.

Here are a few of the key updates:

Carentan, one of the most beloved Call of Duty Multiplayer maps, makes its return in Call of Duty: WWII. Fight through destroyed buildings and fortified streets of this war-torn French town in an all-out battle for a strategic German stronghold. Available Day 1 for Season Pass and Digital Deluxe Edition owners.

You can view the trailer HERE.

The drivers also address a few bugs, including a rare issue with secondary displays blanking out on some systems, “Yellow bang appearing by the graphics entry in Device Manager,” and momentary display corruption on notebooks with hybrid GPUs, in which the display is switching between the CPU-integrated and NVIDIA discrete GPUs.

You can download the new GeForce 388.13 WHQL Game Ready Graphics Drivers from GeForce Experience and GeForce.com.

Bethesda Softworks, a ZeniMax Media company, today announced that Wolfenstein II: The New Colossus, developed by the award-winning team at MachineGames, is available now for the Xbox One, PlayStation® 4 computer entertainment system and PC. Wolfenstein II: The New Colossus rockets the action and chaos of the Wolfenstein franchise to new heights. As BJ “Terror-Billy” Blazkowicz, players must unite a rag-tag group of resistance fighters all striving toward one common goal: kicking Nazis out of America. The Windows version is now available on Steam.

“The Wolfenstein franchise is all about over-the-top action, combat and storytelling,” said Jens Matthies, Creative Director at MachineGames. “With The New Colossus, we pushed our creative boundaries even further, and we can’t wait for players to finally experience the next chapter of this wild ride.”

Wolfenstein II sends players to Nazi-controlled America on a mission to recruit the boldest resistance leaders left. Players will fight the Nazis in iconic locations such as small-town Roswell, New Mexico, quarantined New Orleans, and a post-nuclear Manhattan. Armed with an impressive arsenal of fully upgradeable retro sci-fi weaponry, including the all-new Dieselkraftwerk, players can unleash new abilities to blast through legions of advanced Nazi soldiers and über soldiers in this definitive first-person shooter.

Also available today via the The Bethesda Store is the Wolfenstein II: The New Colossus Collector’s Edition, which includes a 1/6 scale 12-inch action figure of the game’s Nazi-killin’ hero William Joseph “BJ” Blazkowicz, packaged in a premium, 1960s-style box. BJ comes fully equipped to rally the Resistance and free America, with an arsenal of accessories including four high-powered guns, a hatchet, and his bomber jacket. This limited Collector’s Edition also includes the eagerly awaited game inside an exclusive metal case, and a 9″x14″ Blitzmensch poster.

This Halloween, stranger things invade World of Tanks battlefields on PC. From October 27, the ghoulish tank Leviathan from the underworld attempts to besiege the world of the living in World of Tanks on PC.

Leviathan, ruler of the armored afterlife, has grown weary of his underworld dwelling and seeks to conquer the world of the living to expand its evil empire. Standing in its way are two multi-turreted event tanks: devastating long-range sniper Franken and thick-skinned Stein that can soak up damage and rush into the melee.

Players will find both these tanks in their Garage from October 27 19:00 Amsterdam time. After picking which one to play, you can face Leviathan’s forces in a PvE mode where they must stop its ingenious minions and take out the monster once and for all. If you’d rather combat real enemies, there’s a 15-vs-15 PvP mode, too.