Matrix Games and Slitherine have announced that Order of Battle: Allies Defiant, the first chapter in a new trilogy of DLCs that depicts World War 2 from the Allied perspective, is out now.

Allies Defiant covers the battles starting from the spring of 1940 to late 1942. It features a fully-fledged campaign with 12 new scenarios and some of the most iconic British units of WW2.

We’re celebrating the beginning of this new trilogy with a week-long 60% discount on all the previous expansions, valid until Feb 4th, 12:00 GMT. Check them out here.

In the first battle, the player takes command of British units deployed to Norway. When the war intensifies on the Western Front in May 1940, they are forced to change their focus and the next two scenarios feature defensive battles in Belgium and France.

Afterwards the campaign moves to North Africa, where British forces battle Axis troops in Egypt and Libya. In spring 1941, the player gets to fight the crucial naval battle at Cape Matapan in the Mediterranean Sea. They are then reassigned to participate in the defence of Greece after.

The last stage of Allies Defiant focuses again on the desert war, which changed dramatically with the arrival of Rommel’s Afrikakorps. Since the Desert Fox managed to drive the Allies back into Egypt in 1942, the player has to deplete enemy offensive strength before they can finally resume offensive operations. This will allow them to deal Axis forces a decisive defeat at El Alamein.

2 years have passed since the start of a war that would see nearly all of Europe in ruins. German ambitions have grown dangerously. High on victory and with only the Balkans to secure, Germany plans to violate its pact with Russia and launch the largest and fastest tank assault in history. Though Russia was tipped off that such an assault was coming, this intel was not acted on. Her armies find themselves caught by surprise and scrambling to defend themselves from the coming onslaught…

Take command of Germany during this time in Panzer Corps 2: Axis Operations – 1941. First, secure your flank from Italian failure and take command in the Balkans. Germany took serious losses here and in Crete, which would later be known as “the graveyard of Fallschirmjäger”. Your steady hand could prevent losses here that would hurt German efforts in the future.

Once your flank is secured, launch your assault on Russia. Your mission: Inflict as much damage as possible. Running against the clock, strike hard at grounded aircraft and stranded armed forces. Russia can be given no time to consolidate and strike back, so plan your attacks accordingly…

Play it your way:

Beta and Preview:
Want to help us test and polish Axis Operations: 1941? You can join our Beta here.

Find out more about Panzer Corps 2: Axis Operations – 1941 via the games official webpage. 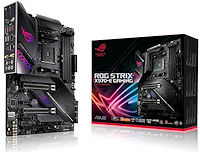 AMD’s AM4 socket has been consistent throughout the entirety of its Ryzen processor’s lifespan, and the latest Zen 3 processors are best suited for the X570 range of motherboards. Today it’s time to see what the mid-range ASUS ROG Strix X570-E Gaming has to offer. Some of its main features include Intel 2.5 GbE and Wi-Fi 6, with dual PCIe 4.0 x4 M.2, with plenty of USB 3.2 G2 connectivity. The ROG Strix X570-E Gaming looks strong and we examine it to see how it stacks up.

We review a new revision Corsair MP600 PCIe Gen 4.0 SSD; this is the CORE model, which is amongst the best performing NVMe SSDs we have tested to date, rating at 5 GB/sec. Corsair is trying to offer a more price-competitive product range. The 2 TB version tested costs 16 cents per GB. In this round, however, there’s a twist.

NVIDIA has released the latest version of GeForce Game Ready drivers. The drivers add optimization for “The Medium,” including support for RTX raytracing and DLSS. The drivers also introduce support for the Mobile GeForce RTX 30-series “Ampere” graphics. Among the issues fixed with this release include game crashes and broken HUD with “X4: Foundations” on RTX 30-series GPUs; game crashes for games based on the RE2 game engine in DirectX 11 mode; “Error 707″ application crash with DaVinci Resolve; an application freeze with MPE GPU acceleration in Adobe Premiere Pro; a problem with color distortion in Zoom meetings with NVENC enabled; random crashes with “Detroit: Become Human;” and stuttering/lagging with game launches in Steam VR.

You can download the GeForce 461.40 WHQL Game Ready drivers via GeForce.com.

The beginning of a new year is the right time to start a new journey with fresh content and features deploying in World of Tanks. Update 1.11.1 brings a new sub-branch of Italian heavy tanks with an improved autoloading mechanic to the game. The updated Platoon system will allow you to find gaming buddies easier (without being limited to friends and contacts), and a few interface improvements make the gameplay even more enjoyable.

The new Italian heavy branch begins with the Tier VII Carro d’assalto P.88 and consists of four vehicles with great gun depression angles, well-armored turrets, and stylish exteriors. The top animal in the pack, the Tier X Rinoceronte (‘Rhinoceros’), reminds us that Italy is famous for its automotive design traditions. A distinctive feature introduced with the new sub-branch is the improved autoloading mechanic. As well as being able to choose between firing intermittent shots or salvos, with Tier VIII–X Italian heavies you get a rebate (up to 50%) for the reloading time of your next shell—if you had to shoot just before an extra round would be fully loaded into the clip.

Along with the new branch, four sets of battle missions are being introduced, each one dedicated to a separate tank in the sub-branch and giving out an Ancient Roman-themed emblem, inscription, and decal as rewards, with the Rinoceronte set also yielding the “Testudo Formation” 2D style. The style fits Italian vehicles only, and all other customization elements can be applied to any vehicle. Each mission set is to be completed by its ‘own’ new Italian heavy, but all of them are also doable in the Rinoceronte or in the Tier VIII Premium tank, the Bisonte C45.

“Around 3 years ago, in May 2018, we revealed the Italian tech tree, with Gianluigi Buffon as an ambassador,” says Max Chuvalov, World of Tanks Publishing Director. “The players spent some time mastering the new mechanic, and they really liked the Italian tanks. Now we’re adding new researchable vehicles that not only complement the Italian tree, but bring their own distinctive features, in order to make the experience even more diverse and exciting. Take these awesome machines for a spin and enjoy the highly-tactical gameplay!”

Also coming with Update 1.11.1 is the Platoon 2.0 system. Available for Random Battles, it allows you to find battle buddies with ease: it’s fully automated, and the search can be performed using filters you apply. Moreover, you can team up with a friend the old-fashioned way and find a third partner using the new system if you want, and once the Platoon is complete, you’ll see the allied vehicles side by side with your current ride in your Garage.

The interface improvements that will arrive along with the update continue the tradition of integrating the best solutions from popular UI mods into the client. In the game settings, you can now activate such options as the Proximity spotting circle (showing the radius of ‘unconditional’ spotting on the mini-map) and a repair timer for damaged vehicle modules.
Fight tactically in the new Italians alongside your new buds, earn the new Roman style and don’t let any brutes stab you in the back! If you need more info on Update 1.11.1, take a look HERE.

Matrix Games has announced that Combat Mission Black Sea, one of the most popular titles in the renowned Combat Mission franchise, is now available on the Matrix Store and on Steam.

Get ready to command detailed, highly researched American, Ukrainian and Russian units and immerse yourself in an hypothetical open conflict in the summer of 2017.

Four high-risk campaigns, 22 self-contained scenarios and a plethora of Quick Battle maps await you and will test your tactical acumen.

Extend your gaming experience with the “Battle Pack 1” DLC already available for purchase.

Fight alongside Americans and Ukranian forces to stop the Russian advance on Kiev, or command a Battle Tactical Group from the Russian 205th Motorized Rifle Brigade and bring the fight to Ukrainian and American forces!

Watch the Combat Mission Back Sea in 2 minutes Trailer HERE.

Anyone with a copy of the game purchased on Battlefront.com will also be able to redeem a Steam key HERE using their original game code.

AMD late Thursday released the Radeon Software Adrenalin 21.1.1 beta graphics drivers. The drivers add optimization for “Hitman 3,” with up to 10% performance uplift measured at 4K with an RX 6800 XT, compared to the previous 20.12.1 drivers. The new 21.1.1 drivers also add support for “Quake II RTX.” A large number of issues were fixed. For starters, an issue with Radeon Software that caused recording/streaming overlay indicator to reset itself to its default position has been fixed, sometimes even after task switch, which have been fixed. The performance metrics overlay flickering on displays with HDR enabled has been fixed.