Renowned zombie slayers Bill, Francis, Louis and Zoey from the Valve smash hit, Left 4 Dead, are tooled up and ready to take on a new horde as they join Zombie Army 4: Dead War as brand new playable characters in the latest free DLC in Season 3 which is available now! In addition to the free characters, Season Pass owners can now visit the spine-chilling Abaddon Asylum in a new campaign mission which is also available as standalone DLC.

Abaddon Asylum is the second mission in the ‘Return to Hell’ campaign, following the events of Terminal Error where you uncovered information about the location of Baron Umbra, the mastermind behind the dastardly occult scheme. You will have to fight your way into the Asylum before tracking down Baron Umbra and taking him out once and for all.

Developed by Rebellion in collaboration with Flix Interactive and Radical Forge, Abaddon Asylum is available now as part of Season Pass 3 and also available to buy separately, priced £5.59. In addition, all players can also download the Left 4 Dead Character Pack for free now on all platforms.

The entire Season Pass 3 is available to buy now, priced £29.99 with far more content yet to come.

AMD today released the latest version of its Radeon Software Adrenalin drivers. Version 21.6.1 beta introduce support for the upcoming FidelityFX Super Resolution (FSR) feature, AMD’s answer to the NVIDIA DLSS. The driver release notes don’t mention which exact titles support it at launch, so we’ll probably have to wait until a formal launch of the feature. In addition, the drivers also introduce support for the Radeon RX 6800M mobile graphics, and optimization for “Dungeons & Dragons: Dark Alliance.”

Among the bugs fixed with this release are one which causes FreeSync to lock up during task-switching, an application crash with “Anno 1800″ in DirectX 12 mode; AMD Cleanup Utility accidentally mopping up non-graphics AMD drivers (such as chipset, storage, etc.); lower than expected performance with “Destiny 2″ on some products; and enabling raytracing in “Ring of Elysium” causing an application crash.

Anecdotal reports of fixed idle power consumption for AMD’s graphics cards are filling the internet following the release of their latest Radeon drivers, version 21.6.1. Besides introducing support for FSR (which we have already tested with a new special image comparison code from our resident W1zzard with great results), users are reporting reduced power consumption on idle or low-intensity workloads – something that we had already covered in our latest AMD reviews, which showcased higher power consumption compared to NVIDIA.

Users are reporting drops from around 30 W to ~8 W – nothing to scoff at, and getting AMD’s offerings in line with NVIDIA’s on that particular metric. While this remains anecdotal evidence for now, rest assured that we will be testing these new drivers so as to definitely claim an improvement (or the absence of it).

Among the issues fixed with this release are random flickers with WoW Shadowlands; a blackscreen issue with GeForce GTX 980M SLI notebooks; FreeStyle not working on “Crossfire” (the game) after a game update; certain HDMI displays flickering in HDR mode; incorrect color rendering with the “sharpen” FreeStyle filter being enabled with HDR on RTX 30-series GPUs; and flickering and signal connectivity issues with launching a game on a machine with multi-monitor adaptive-Sync monitors.

You can download the GeForce 471.11 WHQL Game Ready drivers via GeForce.com.

Players can also expect a whole heap of new features, including a brand-new mode, the latest season of Battle Pass, reworked HE shells and more

One of the biggest updates in recent history has arrived in World of Tanks. Update 1.13 sees major reworking of core mechanics, such as HE shells and SPG (self-propelled gun) countermeasures, as well as other changes and additions, such as a brand-new mode, the eagerly anticipated Season 5 of Battle Pass and interface improvements.

The heaviest change that players will notice is the new capabilities they now have to combat those vehicles that rain shells from the sky. SPGs have changed a great deal since their inception in World of Tanks, and it became clear more artillery countermeasures were needed to level the playing field somewhat. With the latest update, tankers will now have 3 tactical features at their disposal: Sound Detection is a new Commander-only perk which will warn those in the danger zone that an artillery shell is incoming through a special indicator, brighter shell tracers will allow players to better gauge from where an SPG has fired and the field of fire markers will let tankers know where an SPG recently fired (this marker will appear on the minimap for 10 seconds).

However, SPGs aren’t missing out on the fun either. Artillery now have three available shell types, all with their own purpose in battle, trajectory and velocity, granting a greater variety of tactical opportunities to arty players. Two of these shell types will not stun vehicles, which will greatly reduce the overall stun time seen in battle. Additionally, the SPG ammo interface has been updated and the Intuition perk has been reworked, meaning quicker changes of shells for all vehicle types.

Update 1.13 also sees the introduction of the reworked HE (high-explosive) shell mechanics on the main server. Now, HE shells will deal damage at the point of impact, meaning that damage will be calculated at the point of contact with the armor, unlike before which was based on a shell-burst sphere. Those playing heavily armored vehicles will certainly appreciate this change, as HE shells will inflict less damage to their frontal armor from now on. Additionally, they will also now be able to penetrate screens, tracks and the wheels of wheeled vehicles as well as insignificant and/or destructible objects, like fences, for example.

And there’s still more coming with Update 1.13. A brand-new game mode, Recon Mission, will allow tankers to test maps that are in the later stages of development, a collection of Premium vehicles and Clan Wars reward tanks are being rebalanced (as well as the Minsk map), Season 5 of Battle Pass is ready to challenge players, and a selection of interface improvements have been introduced. 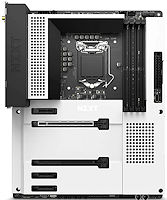 More famous for chassis and coolers, NZXT strikes divisive aesthetic notes with its latest range of motherboards. Using almost full-coverage shrouds for a smooth, minimalist look, we took a look at the AMD B550 chipset version recently.

It follows that NZXT would extend the range to encompass Intel’s Z590 chipset, so without further ado, here’s the N7 Z590.

Positioned below the Z590 OC Formula in ASRock’s current Intel Z590 lineup, this latest Taichi builds on the Z490 version that we looked at last year. Besides the distinctive styling, the Z590 Taichi offers robust power delivery, a trio of Intel Killer networking products, the latest in high-speed connectivity including Thunderbolt 4, and what should be some impressive audio with both Realtek ALC1220 (rear multi-channel) and ESS ES9218 (front panel stereo) DACs.

Update 0.10.5 also brings German Destroyers as a fully researchable tech tree, and celebrates US Independence Day with the USS Colorado and a themed auction, on top of major changes to game mechanics

Today Wargaming, developer and publisher of the widely popular, free to play naval combat game World of Warships (WoWS), has released Update 0.10.5 bringing a barrage of new features to the game alongside other improvements and additions.

The all new Grand Battle mode places players in an alternative history where main batteries take precedence over deck aviation. Players will take the helm of new super battleships from a time where navies focused on pure firepower. The mode tasks players to captain Tier IX-X ships, including super battleships, in a 9v9 battle with a limit of three super battleships allowed per side.

Arriving on the seas is the Satsuma, a project modelled on the famous Yamato with whopping 510mm guns, and the Hannover, a version of the H-42 with 483mm guns, both in four twin-gun turrets. The Hannover’s secondary battery also packs 128mm calibre dual-purpose artillery.

Players earn Intelligence Reports – a new kind of temporary resource collected daily on log-in and by playing in Grand Battle on Tier IX-X ships – in order to earn the opportunity to command these mighty vessels. Rewards from participating in dedicated combat missions include Dazzling camouflages, a commemorative flag, and the Grand Battle patch.

Celebrating the US Independence Day with the Summer Battles

With the release of the Update 0.10.5, four themed groups of combat missions will guide the players to receive, along with camouflages and signals, the final reward – battleship Colorado in her new Independence Day permanent camouflage, alongside a themed auction.

Finally, additional features include major alterations to some game mechanics, such as the removal of friendly fire, as well as changes to the rocket launching mechanics of all attack aircraft. For the full details, developer notes can be found here.

Publisher Bohemia Interactive and third-party developer CSLA Studio are announcing today the release of the Arma 3 Creator DLC: CSLA Iron Curtain. The DLC is available for purchase on Steam for $12.99 USD / €12.99 EUR / £10.99 GBP, and early adopters will receive a 10% discount in the first week of its release.

In the CSLA Iron Curtain Creator DLC, players are taken back to the Cold War era of the 1980′s, and experience what life in Czechoslovakia and its heavily-guarded border with the Federal Republic of Germany could have been like if an armed conflict had ever come between the East and the West.

Key features of the CSLA Iron Curtain Creator DLC include:

CSLA Studio has published a ‘compatibility data pack for non-owners’ via the Steam Workshop, which enables those who do not own the CSLA Iron Curtain DLC to still play on multiplayer servers that make use of its content. However, the DLC’s terrain and singleplayer scenarios remain exclusive to owners of the DLC. Restrictions to the use of non-owned content also apply.

Creator DLC is a label for original Arma 3 projects made by third-party developers and published by Bohemia Interactive. It enables external talent to earn a financial reward while players get to enjoy more quality content. CSLA Iron Curtain is the third Creator DLC project to come out after the release of Global Mobilization – Cold War Germany in April 2019 and S.O.G. Prairie Fire in May 2021.

Developer CSLA Studio will share further development news and updates via their website. More information about the Arma 3 Creator DLC program can be found on https://arma3.com/dlc/creator.