Death in the Desert

Sniper Elite III is a celebration of extravagant carnage – and, less significantly, a big improvement over 2012′s Sniper Elite V2. Its predecessor’s stiff, linear gameplay has been swapped out for a more open-ended, creativity-enabling approach to stealth-shooting. But the big draw – the real draw – is the same pornographically violent X-ray-vision carnage that erupts whenever your bullets meet their targets.

Kiss my aura, Dora! The Fighter Collection announces preorders are underway for DCS: Fw 190 D-9 Dora, the famed Focke-Wulf 190 World War II fighter for DCS World, their free-to-play digital battlefield. You can preorder from the DCS E-Shop, and they say the Dora should be ready for take-off on August 5th. Here’s a feature list:

Sniper Elite 3 is now available, with the sharpshooting simulation being sold through the Rebellion Gamestore, though all roads on this game will lead to Steam, where they have a concise write-up in their announcement: 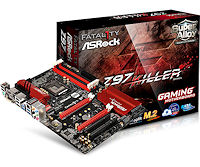 Over the last few years we have seen ASRock gain movement in the motherboard arena. They have developed and revamped some rock solid motherboards at a very affordable price. In the past, we have seen many flagship motherboards from ASRock that have been top performers when it comes to overclocking and stability. Not only has ASRock performed well in the past, they have great aesthetic appeal too. Today, we have a chance to look at their newest variation from their already popular Fatal1ty series. This is the ASRock Fatal1ty Z97 Killer Series Motherboard. With Haswell’s refresh chipset in full swing, we have tested a number of great performing motherboards. But today, the ASRock Fatal1ty Z97 Killer Series has another advantage in this arena due to its aggressive pricing. So let’s move forward and put this motherboard to the test and see what it can do with our Intel 4770K Haswell Processor.

MSI‘s new GTX 780 Gaming 6 GB doubles the available video RAM over the reference design, which just has 3 GB. With the latest titles requiring 3 GB VRAM minimum for textures at Ultra, this 6 GB card could help provide a performance advantage. We will investigate this claim by using our brand-new VGA test suite.

Call Of Duty: Advanced Warfare takes a cue from Black Ops 2 with its sci fi ordinance, except this time it isn’t just the guns the player wields that makes them feel like they’re soldiers from the future. The protagonist in this game is kitted out with an exo-skeleton – a steel frame clasping their limbs and spine that looks like the rig that Matt Damon was wearing in Elysium – that endows them with superhuman abilities. They’re faster, tougher and able to jump incredible heights and distances using something called the ‘boost’ mechanic.

Some of the sci-fi weapons and equipment in Call of Duty: Advanced Warfare are on display in a new trailer from Sledgehammer’s upcoming futuristic installment in the military shooter series. The clip features Sledgehammer cofounders Glen Schofield and Michael Condrey describing how tech such as the exoskeleton redefine gameplay.

Deep Silver today confirms that Metro Redux will hit stores on the 26th August in the US, and the 29th August in Europe.

The boxed copy of Metro Redux contains remastered versions of both Metro 2033 and Metro: Last Light, with all previously released add-on content. Both campaigns can be tackled in ‘Spartan’ or ‘Survival’ play styles, and the legendary Ranger Mode is also included in both games. Metro 2033 Redux and Metro: Last Light Redux are also available separately as digital download only.

Each individual army will also be available as a standalone purchase via digital download, providing new players with a minimal entry point into the massive Company of Heroes 2 multiplayer community, regardless of which content they own. A ll Company of Heroes 2 players can then battle across 31 maps (along with more than 1000 community maps available on Steam Workshop) in auto-match multiplayer.

The addition of US Forces has been the most requested army since Company of Heroes 2 first launched, by a large margin. Each new army has distinctive tactical gameplay options, new infantry, team weapons, vehicles, abilities and upgrades on a total of eight seasonal multiplayer maps set on the Western Front. They have been carefully balanced to ensure optimal game play with previously released armies.