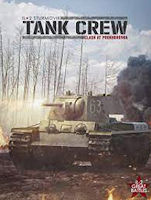 In IL-2 Sturmovik: Tank Crew, players operate some of WWII’s greatest battle tanks in close quarters ground combat missions during the Battle of Kursk. The game can be enjoyed as either a stand-alone product or integrated with other Great Battles titles such as Battle of Stalingrad, Battle of Moscow, Battle of Kuban and Battle of Bodenplatte to create a massive WWII air and ground combat simulation.

IL-2 Sturmovik: Tank Crew allows players to command a tank crew in single and multiplayer environments and battle enemies in highly-detailed intense missions with grueling combat where maneuverability and exposing tank vulnerabilities is vital to surviving and winning.

One of the heaviest Allied tanks of the war, the Churchill entered the war during the Dieppe Raid in France in August 1942. It saw action in North Africa, Italy, and on the Eastern Front. The versatile chassis design was used as the basis for many specialized vehicles throughout the war.

The Churchill Mark IV was the most numerous of the series, with 1,622 produced. Virtually identical to the Churchill Mark III, the main difference being a cheaper and better-protected cast turret. A Bedford 12-cylinder gasoline engine powered the tank and capable of 350 horsepower. The tank’s top speed was around 24 km/h (15 mph), but Soviet tests claimed that a Churchill Mark III reached 28 km/h (17 mph). The main armament of the Churchill Mark IV was the Ordnance Quick-Firing (QF) 6-pounder gun of 57mm caliber. The secondary armament consisted of one coaxial 7.92 mm Besa machine gun mounted in the turret, second Besa machine gun fitted in the hull and 2-inch mortar in the turret roof. The model featured in the sim is produced by the Leyland factory and has Mk.V gun with a 50-caliber long barrel.

In the game, the Churchill Mark IV represents tanks used in the battle of Kursk and can be used in both single and multiplayer scenarios but we recommend the Tank Crew Prokhorovka map since it’s designed for ground engagements and has higher landscape detail than the other maps designed for aerial battles.

For more information on the game, please visit IL-2 Sturmovik: Tank Crew’s Steam Page or via the game’s website.