Corsair’s HS70 gaming headset offers 2.4 GHz wireless operation, the option of 7.1 channel virtual surround effects, 50 mm neodymium drivers, and an impressively light weight. The big questions going into this review, as with all gaming headsets: how do they sound, how comfortable are they, and are they worth the price tag. Let’s find out! 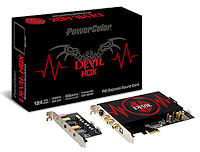 Audio has been a major component of gaming dating all the way back to Pong and Centipede. A good soundtrack and audio reproduction adds to the overall experience of any game just as a bad soundtrack or sub par reproduction can take away from that experience. Discrete sound cards, integrated audio chips, gaming headsets and complete speakers systems are some of the more common items discussed for delivery of gaming audio. Often you will find multiple solutions in a serious gamers tool box, A gaming headset for late night gaming sessions and a speaker solution for when free to play as loud as possible. In this review we will be looking at a speaker system from GX Gaming that looks to bring full range sound to your gaming experience. The SW-2.1 2000 gaming speaker system has intriguing style but will it bring the war zone even closer to home? 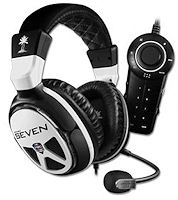 Turtle Beach is perhaps a name better known amongst console gamers since you can easily find their Ear Force lineup of headsets somewhere close to where the boxed console games are in certain stores. Most Turtle Beach Ear Force headsets are compatible with computers or any electronic device with a 3.5 mm jack nonetheless because most gamers or even most people make due with one set of headphones for all their devices. The Turtle Beach Z SEVEN we have for review is actually part of a much larger family of SEVEN headsets. The Z SEVEN is posited as the version for PCs and Macs, the XP SEVEN drops the computer compatibility and goes for Xbox 360 and PS3 compatibility, The M SEVEN is the mobile variant, and the XO SEVEN is the first third-party headset compatible with Xbox One. Then there’s also a bunch of limited edition SEVEN headsets with alternate earcup decorative plates themed after games and movies such as Captain America, Thor, Call of Duty: Ghosts, and Titanfall.