Drive on Moscow Coming to PC

Drive on Moscow is an immediate, exciting and fast paced strategy game set in 1941, with the German Wehrmacht making a push for the capital of the Soviet Union. It was previously available only on iPad, but it’s being ported to PC and upgraded with many new features for the occasion!

The game puts you in charge of either the Wehrmacht or the Red Army. In the winter of 1941, the key to the war is Moscow. Were it to fall, the Soviet Union would receive such a huge blow that it might not recover. But were it to stand, maybe the Russians will be able to reverse the tide…

Sporting an incredible impulse-based turn activation system, the gameplay revolves around decisive initiative, clever timing and exploiting the weather and the terrain. Weather in particular is crucial: it affects the dynamic map, and even the turns’ duration!

The game is being upgraded with a new Live PBEM system, implementation of Slitherine’s Tournament system, as well as a greatly enhanced AI! Drive on Moscow is being improved greatly in both single and multiplayer. The addition of the tournament system in particular will allow us to organize tournaments in the future: you’ll have the chance to win glory on the battlefield (as well as some nice prizes!).

Last, but not least: the game is about to enter its beta phase. Feel free to join and help us: the goal is to provide you with the best gameplay experience, and we need your help. We’ll be extremely grateful for that. Click here to join the beta.

The hit Heroes of Normandie gets richer with the release of its latest DLC, 21st Panzer Division.

This expansion adds 20 new units, a new hero, several new unit abilities, new mechanics such as the firing arc, and more, all for the mighty Wehrmacht!

Heroes of Normandie is an extremely fun game, a digital adaptation by the popular boardgame with the same name by Devil Pig Games. The developers Cat Rabbit are working hard to constantly improve the game and add more features: 21st Panzer Division is yet another step in that direction.

The expansion is now out on our store, and on Steam.

After a brief early access for Battlefield Insiders, the Battlefield 1 open beta is now available for everyone through Origin. This previous announcement has details on testing the World War I shooter. Here’s word:

The Battlefield 1 Open Beta will include the Sinai Desert map, a scorching hot battlefield located just East of El-Jifar. From infantry skirmishes in the narrow streets of the village of Bir el Mazar to dogfights above the majestic cliffs, you’ll need to make tactical use of the dunes as you engage in explosive battles. When all hope is lost, reinforcements will arrive in the shape of a powerful Behemoth: a deadly Armored Train charging through the desert sands.

Two modes will be available as well:

Get your Squad ready to deploy, because on August 31, you’re going to experience war on an epic scale in Battlefield 1.

Today Firefly Studios becomes the first developer to place the fate of entire game worlds in the hands of its players. The Stronghold developer announced that their ‘Final Age’ expansion for medieval castle MMO Stronghold Kingdoms will give a single player, the Marshall of a winning House, the option end their game world with the press of a single button.

As the British developer prepares for the cross-platform release of Stronghold Kingdoms on iOS and Android, players on PC and Mac ready themselves for the unique trials of the Final Age. In this expansion a single House of players must conquer and capture all Royal Towers, a new PvE target on the world map, before deciding whether or not to press ‘The Button’ and close their world forever. Players are then rewarded with multiple prize tiers based on their rank and position at world end, with up to $500 of in-game loot each.

“From the very beginning we knew players would be involved in development, this is the ultimate expression of that” said Simon Bradbury, Lead Designer at Firefly Studios. “Players deserve a proper endgame and in the case of Kingdoms we believe this means letting the community decide whether or not to close their game worlds. This doesn’t mean Stronghold Kingdoms is coming to an end, far from it! For those worlds that players do decide to close new ones will open. We also have updates planned for the game, including our upcoming events system and redesigned iOS and Android versions.”

While the Sixth Age is already available, the Final Age expansion is set for release in the near future. Meanwhile Firefly is responding to one particular request from the community by developing a new in-game event system, offering global PvE and PvP challenges in which players compete for rewards. There are even new world types on the horizon to replace the old and give all players the opportunity for a fresh start in new and uncharted lands.

You can download the new GeForce 372.70 WHQL drivers from GeForce Experience and GeForce.com.

Get the Expansion on October 11th, Live Streams Begin

In the wake of the announcement of “Rights of Man”, Paradox Development Studio is reviving their Europa Universalis multiplayer stream. In these weekly streams fans can watch the development studio compete against each other for world domination. Tune in on Tuesday the 30th of August at 15.00 CEST for the first episode of what will most certainly be an epic tale of betrayal and tense work environment relations.

For those who desire a more in-depth look at the features coming to the “Rights of Man” expansion without all the drama of developers trying to annex one another, there will be a feature live stream on the same channel on Wednesday August 30th at 16.00 with Junior Game Designer Jake and Johan Andersson, EVP of Creative Direction at Paradox Development Studio.

Few things are more contagious than the stories people tell about Crusader Kings II. Tales of intrigue, piety, conquest and murderous sibling rivalry have circled the internet for over four years. Today, Paradox Development Studio adds the world’s greatest pandemic to the mix in The Reaper’s Due, the latest expansion to its best-selling medieval grand strategy-roleplaying game. Watch the release trailer here.

The Reaper’s Due adds a host of new mechanics centered on the Black Death and other world shaping epidemics. Lock your gates to keep the plague from infecting your court, even if it means cutting yourself off from your suffering citizens. Peace and good management will see your provinces reward you with greater wealth and manpower, but rampant disease may depopulate your countryside.

And, as always, The Reaper’s Due will be accompanied by a major free update for everyone who owns Crusader Kings II, whether they buy the new expansion or not.

Are you a clever enough ruler to make it through one of humanity’s darkest moments? Invest wisely and avoid the plague, or shut yourself off and take advantage of the destruction later. The choice, as always, is yours. 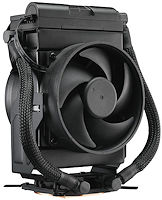 In today’s review, I will be taking a look at the Cooler Master MasterLiquid Maker 92, a dual-fan, all-in-one liquid cooler. At first, it seems to redefine what to expect from an AIO. The radiator and fans are mounted much in the same way as a tower cooler. I will give Cooler Master credit here since this is definitely an interesting design. It may not be pretty, but definitely is interesting.