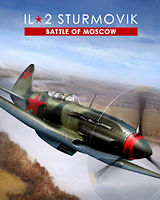 1C Game Studios is excited to announce that IL-2 Sturmovik: Battle of Moscow is available digitally starting from today. The game can be purchased at our website in two editions, Standard and Premium, for the price of $49.99 and $79.99 correspondingly. For additional information on both editions please visit www.il2sturmovik.com.

The game is also available via Steam as DLC for the previous title IL-2 Sturmovik: Battle of Stalingrad.

IL-2 Sturmovik: Battle of Moscow is a combat flight simulation dedicated to the Battle of Moscow, one of the most decisive battles on the Eastern Front in WWII. This new project from 1С Game Studios continues the next generation of combat flight simulations with the latest development technologies – from a new higher level of physics modeling, damage modeling and aerodynamics to modern modes of gameplay with detailed, immersive environments.