The Anniversary Celebrations Are About to Begin in World of Tanks

Over a week of gifts, and more, await tankers, including a brand-new Premium tank

World of Tanks’ August Heat is heating up even more with their 11th birthday celebrations. As with any anniversary, World of Tanks is offering up some great gifts to say thank you to their players for their continued support with Summer Presents.

For simply logging into the game, tankers will get their hands on a brand-new, historically accurate Premium tank: the T-34 with L-11. This Tier IV Soviet medium tank features a default concealment bonus and will come with a 100% trained crew and a Garage slot.

Additionally, tankers who log in 7 times on separate days between August 12th and 22nd will be rewarded with 7 days of World of Tanks Premium Account and 7 Gift Tickets, which can be exchanged for valuable rewards, including bonds, credits, and even more valuable goodies in a special section of the in-game Store.

“We’ve prepared a special event for our 11th anniversary with some great gifts, and we invite all players, old and new, to come join us,” states Max Chuvalov, Publishing Director, World of Tanks. “We really hope everyone enjoys what Summer Presents, Update 1.14 and August Heat as a whole bring to the game!”

Another huge part of August Heat is in full swing: the above-mentioned Update 1.14. The latest update introduces a line of Czechoslovakian heavies which will follow on from the Škoda T 25, the Tier VI medium tank. These beasts sport a feature unique to them: the choice of two guns, which are both equal in terms of performance and stats, but one features a two-shell autoloader, the other a classic cyclical gun. Additionally, with Update 1.14, tankers will also have more freedom to tinker and tune their vehicles to better suit their roles on the battlefield. Field Modifications are available to all Collectors’ and Tier VI-X vehicles, excluding rental ones.

As well as Czechoslovakian reinforcements and Field Modifications, a new map, Safe Haven, is coming to World of Tanks. Available for Random Battles, this summer map takes inspiration from 1960s Japan and features a soundtrack by the World of Tanks audio team and Akira Yamaoka, the man behind those iconic Silent Hill compositions.

And finally, Update 1.14 will also see the return of Frontline for the first time in 2021, a new game mode called Topography which will test and improve tankers’ knowledge of maps and various changes to select Premium vehicles and the Personal Missions for Artillery.

For more information about the Summer Presents event, visit worldoftanks.com.

Ubisoft has announced that Assassin’s Creed Valhalla’s next major expansion, The Siege of Paris, is now available. Set in Francia, this new adventure will set Eivor on a dangerous path full of gripping questlines across the Frankish countryside towards one of the most infamous battles in Viking history. Players will get their hands on new weapons, abilities, gear, and skills to take on new enemy types. The Siege of Paris will also mark the return of Infiltration Missions, directly inherited from long-time, fan-favourite Black Box Missions. Here, players will have the liberty to choose the best way to eliminate their designated target. The Siege of Paris will be available for all Season Pass owners or as a separate purchase by all owners of the main game.

Players will have access to the expansion after completing one of the two first narrative arcs available in England (Grantebridgescire or Ledecestrescire), which unlock just after they arrive from Norway. When in Ravensthorpe, Eivor will stumble upon visitors from Francia offering suspiciously generous presents and will then find their way to Francia. The suggested power level for Francia is 200, but there is no mandatory power level to play The Siege of Paris.

In Moscow ’41 you take control of Soviet forces as they deliver blow after blow to an overextended Wehrmacht during their winter counteroffensives of 1941/42. Though battered and bruised, German armies will prove mighty opponents for the less experienced Red Army, which must also contend with overly ambitious objectives set forth by the Soviet leader Joseph Stalin.

Exodus, the promised short film for Battlefield 2042, is now online. This helps set the stage for the events in the upcoming installment in the military shooter series, and shows off some returning faces. Here’s word:

Electronic Arts and DICE have released “Exodus,” a short film providing a closer look at what started the No-Pat Civil War in Battlefield™ 2042 as well as introducing its rich cast of playable No-Pat characters known as Specialists. Most notably, “Exodus” reintroduces an old friend for fans of the series with Battlefield 4’s Kimble “Irish” Graves, played by Michael K. Williams, returning to 2042 as a playable No-Pat Specialist. Exodus also introduces the mysterious “Oz,” who clashes with Irish over the future of the No-Pats and sows the seeds of conflict. The narrative will continue to evolve over time as more Specialists join the conflict, each with their own story to tell, and pull players deeper into the world and lore of Battlefield 2042.

The XFX Radeon RX 6600 XT Speedster Merc 308 is the company’s most premium custom-design implementation of the newest kid on the gaming graphics card block. The RX 6600 XT is designed to be just about everything the plethora of PC gamers still on Full HD (1080p) monitors need, as it brings with it the ability to play AAA games at the highest settings with Full HD. It’s also capable of raytracing, which should set you up for premium AAA or e-sports gameplay when combined with FidelityFX Super Resolution (FSR). XFX combines the RX 6600 XT with its most premium cooling solution and highest factory-overclocked speeds.

MSI has entered the NVMe SSD storage market with the MSI Spatium M.2 NVMe SSD series. Positioned one notch under the flagship M480 comes the M470, and with performance numbers reaching 5GB/sec and is rated at a massive 1600 TBW of endurance for the 1 TB SSD, this NVMe 1.4 compatible SSD from MSI might be just what the doctor ordered.

Dive into deep sea combat with this explosive update, build a Dutch cruiser in the new Dockyard or escape to the anime world with ‘Legend of the Galactic Heroes: Die Neue These’ crossover

World of Warships, the world’s biggest naval warfare MMO developed and published by Wargaming, has revealed the upcoming Update 0.10.7, packed with new content including the addition of submarines to Ranked Battles, the De Zeven Dockyard, the long-awaited return of the USS Missouri, and a unique collaboration with Legend of the Galactic Heroes: Die Neue These, the Japanese anime series based on the popular science fiction novels.

Submarines Arrive in Ranked
Submarines completely changed the face of real-life naval warfare in the 20th century and are now set to do the same again in World of Warships. Players can experience a whole new world beneath the surface, by taking control of the deadly submarines, now playable out of testing for the first time. These delicate but stealthy vessels bring a whole new tactical element to the game, as players weigh up the pros and cons of the four separate diving levels and try out acoustic homing torpedoes, bolstered by sonar ping mechanics. Some battleships have been equipped with anti-submarine defense aircraft to blow these vessels out of the water, while many destroyers and some light cruisers can dispatch depth charges to tackle them. Players can test out this new class in more relaxed co-op battles, and then put them to the test in the special upcoming season of Ranked Battles.

Dutch Cruisers: Part Two
Early Access to Dutch Cruisers continues in 0.10.7, with the added ability to construct the Tier VIII ship De Zeven Provinciën at the new Dockyard through 24 shipbuilding phases. In addition, the “Dutch Cruisers: Part 2” special event offers the reward of a commemorative flag and Klaas Jenssen, a Dutch commander with enhanced skills, when a chain of combat missions is completed.

Legend of the Galactic Heroes: Die Neue These
This update marks our first collaboration with Japanese anime series based on the science fiction novels of the same name “Legend of the Galactic Heroes: Die Neue These”©, which have a profound story and an overwhelming scale. Accompanied by a newly recorded custom voice for the new commanders, players will be able to take charge of their fleet with the commanders, Reinhard von Lohengramm from the Galactic Empire, or Yang Wen-li from the Free Planets Alliance and more. New camouflages also will allow players to pick their side by coating their ship in the colours of these two factions. More details will be revealed soon.

The Return of the Missouri
The USS Missouri will soon return to the waves, now sat at an equal economic level with other Premium Tier IX ships. With this update, the iconic vessel that ended World War II will be available for purchase in exchange for Doubloons. 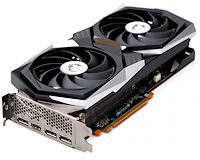 AMD has lifted the review embargo on its recently released RX 6600 XT graphics card.  We bring you a number of reviews for custom cards from a number of different manufactures. Here’s a bit from AMD:

Check out the reviews listed below.

AMD today released the latest version of Radeon Software Adrenalin. Version 21.8.1 Beta comes with support for the Radeon RX 6600 XT graphics card (which we reviewed here). It also fixes an issue with “The Medium” that caused the game to crash while running FrameView. The company also identified a handful issues, some even specific to the RX 6600 XT, such as inaccurate point-lights in “Control,” and driver timeouts observed in “Horizon Zero Dawn” with RX 6700 XT, and less specifically on RX 500 series products with simultaneous gaming+streaming.