After the world was introduced to the Microsoft and NVIDIA partnership to bring real time raytracing solutions to DirectX 12 via NVIDIA’s RTX initiative, we now have confirmation of what is expected to be the first game studio – and AAA game experience – to feature the technology. In a post from their official Twitter account, 4A Games has announced that they are collaborating with NVIDIA to bring RTX’s effects to their upcoming Metro: Exodus open-world video game.

The company further warned users to keep at attention towards the impending release of a proof of concept video to be released during GDC. 4A Games is one of those companies that has been delivering incredible experiences through and through, and has already dabbled with NVIDIA’s technologies in the past (particularly with their first game, Metro 2033). Here’s hoping that AMD can work its drivers into great performance levels in supporting this DX12 technology on their graphics cards as well.

Corsair is a well-respected name in the PC industry and they continue to offer a complete line of products for enthusiasts, gamers, and professionals alike. Today we are taking a detailed look at Corsair’s latest flagship power supply, the AX1600i Digital ATX power supply unit. This is the most technologically advanced power supply we have reviewed to date. Over time, we often grow numb to marketing terms like “most technologically advanced”, “state-of-the-art”, “ultra-stable”, “super-high efficiency”, etc., but in the case of the AX1600i Digital PSU, we have seen these claims come to life before our eyes. 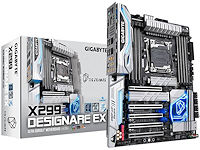 Intel refers to the X299 platform as “High-End Desktop” (HEDT), but the term “high-end” means different things to different people. A gamer might think the top mainstream parts are better because they support higher overclocks, while a power user would scoff at that platform’s lack of connectivity. The overlap continues as the cheapest HEDT components don’t even have any of the features called “high end” when placed on a mainstream platform.

Conversely, some boards far exceed “high-end” expectations. And the X299 Designare EX’s feature set places it among these elite parts. Is it worth the price?

World of Tanks first roared onto PC in 2010 and to date has recruited 160 million registered players, becoming one of the most popular games in the world. The new World of Tanks Update 1.0 lands today in Europe and North America, unleashing Wargaming’s high-end Core graphics engine exclusively for PC players. The biggest ever update to the game takes tank combat to new heights with improved visuals, 29 completely reworked battlefields, a new soundtrack, and the new Glacier map.

The new graphics engine, Core, has been in development for over 4 years and was engineered entirely in-house. Update 1.0 will see World of Tanks PC switch to this new engine and take advantage of the latest technology for graphics processing and rendering. Core’s introduction marks a new era for World of Tanks PC with PBR, post-processing effects, advanced lighting and shading, particle effects, and a multitude of other optimization and performance-enhancing features. Watch the World of Tanks 1.0 trailer HERE.

Together with greater visual fidelity, Update 1.0 adds a brand-new dynamic soundtrack, recorded by the Prague Symphonic Orchestra after more than a year of development. To create a specific atmosphere to each map, local ethnic instruments were added and mixed to the musical score. Each in-game location gets its own theme that resonates with its setting, in every battlefield. Published by Sony Music Entertainment, the World of Tanks official soundtrack will be available to stream and download for free across all major music platforms including Spotify, Tidal, Deezer and many more.

Update 1.0 is released in partnership with Intel Corporation to help ensure that World of Tanks remains up to date on the latest technological advances and uses them to enhance its gaming experiences.

“Update 1.0 improves the baseline technology for the game, introducing the in-house developed Wargaming Core graphics engine,” said Milos Jerabek, Development Director for World of Tanks PC. “Thanks to it, we’re now capable of elevating the entire game and can ensure World of Tanks is a fun and immersive experience for years to come.”

Click here for more information on the World of Tanks Update 1.0, the full list of changes and watch a seven minute plus video review,

By Joe Robinson @ The Wargamer

Despite the fact that Hearts of Iron IV still has some fundamental issues with its design, the HOI team at Paradox Development Studios are certainly doing a great job distracting us by doubling-down on what actually works (and fleshing out areas of the world bit-by-bit). That’s not meant to be an insult – Dan Lind and his team have been doing great work with what they have, but most fans acknowledge there are problems, even now. Thanks to the recently released Waking the Tiger expansion however, those problems feel a little less pressing.

As pledged last August, independent games developer Bohemia Interactive has donated half of its 2017 net revenue from direct sales of the Arma 3 Laws of War DLC to the International Committee of the Red Cross (ICRC). The total amount raised is USD 176,667 (one-hundred and seventy-six thousand, six-hundred and sixty-seven US dollars – approximately EUR 143,543 or GBP 126,016).

To further celebrate the special occasion, the studio published a special blog post, which includes a new story trailer for the DLC, plus an infographic with statistics on how people played Laws of War’s mini-campaign.

“With over two billion gamers worldwide, video games have an incredible potential to convey the importance of international humanitarian law (IHL). The collaboration between Bohemia interactive and the ICRC has been extraordinary and we have learned a lot from each other by exchanging ideas and our respective expertise on how to incorporate IHL into a video game. The success of the Arma 3 Laws of War DLC has shown us that video games are one of the many ways to reach new audiences and call attention to the fact that wars do have limits and rules. We are also very grateful that Bohemia Interactive will donate $176,667 to the ICRC, which shows their commitment to support our work, to help people affected by armed conflict and other situations of violence in over eighty countries.” said Helen Durham, Director for International Law and Policy at the ICRC.

Bohemia Interactive’s CEO, Marek Spanel: “We knew this DLC’s theme might seem a bit unusual, but we also felt that it has a rightful place in a game like Arma 3. At the same time, our community normally expects more traditional content you’d see in a military game, such as new weapons, tanks, and helicopters. That has made it even more amazing to see the immense level of player support for the Laws of War DLC, which really shows again how both games and the gaming audience have matured. If you also consider that some of our players are in the military or might pursue a military career in the future, then we’re glad this DLC has been able to increase awareness for this important topic. And being able to also make a financial contribution to the ICRC’s efforts is a great bonus.”

Arma 3 Laws of War is a downloadable content pack for Bohemia Interactive’s military game Arma 3. It explores a different perspective on the battlefield by introducing a fictional humanitarian NGO faction called IDAP (International Development & Aid Project) to the game. The package also includes a new van, a drone, outfits and gear, and a range of decorative objects such as shelter tents and medical or food supplies. One of the main highlights of the DLC is the “Remnants of War” mini-campaign. Here, players take on the role of IDAP explosive specialist Nathan MacDade, and uncover what happened in the town of Oreokastro – witnessing the long-term consequences of war and particularly the effects of mines and unexploded ordnance.

Furthermore, the Laws of War DLC implemented a free Showcase scenario on the topic of International Humanitarian Law (IHL). This singleplayer scenario, which is presented as a virtual reality training course hosted by IDAP, aims to provide all Arma 3 players with the opportunity to become more familiar with the DLC’s complex and serious theme.

The old king of legend couldn’t control the waves with a flick of his hand, but you, his heirs, can master them with the power of your navy and the reach of your trade fleets. The destiny of millions is in your hand in Rule Britannia, the newest immersion pack for Paradox Development Studio’s classic historical strategy game Europa Universalis IV.

Rule Britannia brings greater depth to the lands of England, Scotland and Ireland while offering tools that will deepen the experience of Europa Universalis IV no matter where you choose play. The mission system has been completely reorganized (with new unique missions for the British and Irish nations), and any nation with a fleet can choose a naval doctrine that will boost its galleys, reduce its maintenance cost or strengthen the power of its trading ships.

Europa Universalis IV: Rule Britannia is now available in the Paradox store and on Steam for the suggested retail price of $9.99.

NVIDIA today released GeForce 391.24 WHQL software. The drivers add more optimization for “Sea of Thieves,” and two new NVIDIA Freestyle post-fx filters – “Old Film” and “Tilt-Shift.” The drivers address issues related to VR headsets from both HTC and Oculus, in which the headset would stop working after several application launches or resumption of system from hibernation. A bug that prevented Freestyle from being enabled on games that support it, is fixed. MPC-HC no longer stutters in the first couple of seconds of the video playback. A driver TDR error with Mozilla Firefox was fixed. A rare bug that caused stuttering on “Rise of Tomb Raider” when opening the in-game menu on GTX 1060, was fixed.

You can download the new GeForce 391.24 WHQL drivers from GeForce Experience and GeForce.com.