In Back to Hell, players will lead 11 never-before-seen divisions into seven historically accurate battles (including five in co-op and multiplayer), based on real world operations. For each historical mission, divisions are set, and players have to choose the pre-made battlegroups they want to command. Battlegroups must fit into a greater plan to achieve common goals, which means players will have to fight and accomplish objectives with what they are given, not always what they would have chosen.

Back to Hell arrives alongside a free content update, Bulls on Parade, which adds a long-awaited random map option to the lobby, and features the free historical mission Operation Atlantic in solo, co-op and multiplayer. The 11th Armoured Division “Black Bull” is playable for the first time, and only available in this mission. It will team up with the 3rd Armored and face off against the 16 Luftwaffe and the 21 Panzer divisions.

BUT WAIT! THERE’S MORE! Paradox introduced a new bundle today, Steel Division: Normandy 44 Locked & Loaded, which contains the base game, deluxe edition content, Second Wave and Back to Hell. Available exclusively on Steam, Locked & Loaded gets players up-to-date on content and 10% off the cost.

Call of Duty: WWII generated approximately $500 million in a $104.8 billion Gaming Industry during 2017. It’s a huge industry and Battle Royale games such as H1Z1, PUBG and Fortnite are becoming increasingly popular. With this in mind, Treyarch, the developers of Call of Duty 2018 will be looking to innovate new ideas. Could we see a Battle Royale Mode in Call of Duty for the first time ever?

The immense competition between Battle Royale Games such as H1Z1, PUBG and Fortnite has been the major topic of recent times. Fortnite managed to achieve another incredible milestone last week, the game hit 3.4 million concurrent players. If we compare that to PUBG, they’ve hit just over 3 million concurrent players on PC also. Between both Fortnite and PUBG, $1 billion was made last year so it’s fair to say that it’s in every developer’s best interests to tap into the Battle Royale community.

Battle Royale Games won’t be going away in 2018, in fact even more competitors will be going head to head against both Fortnite and PUBG. There’s no doubt Call of Duty will be looking into this and how this could affect their future earnings.

Here are several reasons why Battle Royale in Call of Duty 2018 is a strong possibility:

With Battle Royale taking over the gaming market in 2017, there’s no doubt Treyarch and Activision will be wanting to join in on the action.

AMD has released the new Quad-Core Ryzen 5 2400G and Ryzen 3 2200G AM4 socket desktop processors, these new Ryzen CPU’s come armed with the world’s most powerful graphics on a desktop processor, featuring AMD’s Radeon Vega architecture. We have collected a number of reviews on AMD’s new Ryzen 5 2400G and Ryzen 3 2200G CPU’s, and you can read them via the links provided below.

After the assassination of Julius Caesar in 44 BC, the Roman Republic found itself in mortal danger. The infighting that followed eventually saw the end of the Republic and the birth of the Principate, with Octavianus Augustus sole ruler of the newly-established Roman Empire.

Victory after victory, the Empire slowly expanded, reaching its maximum extent in 117 AD. But dominance couldn’t be held forever. Internal and external threats undermined stability in the centuries that followed. To ease administration, the empire was eventually divided into western and eastern halves, each with its own emperor. Under the constant pressure of large Germanic confederations, the western half eventually collapsed, and in 476 AD the last western emperor was deposed.

In Legions Triumphant, the new exciting DLC for Field of Glory II, you can be part of the final conquests of the Roman Empire in Britain, Germany and Dacia, witnessing the Pax Romana when the legions on the frontier mostly kept at bay the barbarians to the north and first the Parthians, then the Sassanid Persians, in the east.

Relive the final disintegration of Western Roman power under pressure from the Germans and Goths (themselves attempting to outdistance the rising power of the Huns), and the desperate attempts of 5th century leaders to hold at bay the barbarian tide, using armies at least partly consisting of barbarian troops.

Legions Triumphant follows the development of the Roman Imperial Army through its heyday, its late 3rd century AD reorganisation to deal with new threats, and subsequent decline. It also follows the rise of its various enemies, the Germans and Goths, the Sassanid Persians and the dreaded Huns. Play as the Romans or as one of their many enemies.

In addition, this expansion adds numerous improvements and changes to the campaign system, with 4 new historically-based campaigns, the ability to name your units, to fight on after a lost battle and many more!

Get more information about Field of Glory II: Legions Triumphant from its official product page.

A great classic game returns, as Strategic Command Classic WW2: Global Conflict is available! This release will also include the expansions “Assault on Communism” and “Assault on Democracy”.

Players will be able to wage World War II across the massive expanse of the entire planet. From battles in Europe and North Africa all the way to Asia and the Pacific, Global Conflict features a very huge map, leading the forces of 6 major and 58 different minor nations.

To celebrate this important milestone, Strategic Command Classic WW2: Global Conflict will have a 50% discount for an entire week! Hurry up, the offer ends on Thursday 15th!

As with all of the previous Strategic Command games, Strategic Command Classic WW2: Global Conflict comes with a full Game Editor that allows you to modify or create your own all new scenarios, campaigns and maps. To assist with that, the full range of terrain tile types and resources are available including Western, European, Asian, Tropical and Pacific Island themed villages, cities, capitals, jungles, mountains, marsh and hills. 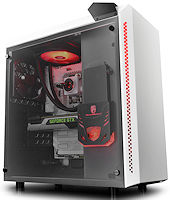 Wherever you look, it seems the cost of today’s PC components are increasing at a steady rate. You could call it the Brexit effect, or consumerism gone wrong, but the point is, you can spend well over a thousand pounds on a new PC and still end up with modest, entry-level components.

But are there still bargains to be had from lesser-known brands? Chinese manufacturer Deepcool has been championing budget parts for a number of years, and is now attempting to tackle three modern trends – tempered glass, liquid cooling and RGB lighting – in a single package priced from £120. Enter the Gamer Storm Baronkase Liquid chassis.

AMD has released the WHQL version of its Radeon Software Adrenalin 18.2.1 Beta drivers, which the company had introduced just five days ago. There’s no apparent difference between this driver version and the previously released one, other than the WHQL certification – this might mean some additional stability in the new driver release compared to its Beta version, though mileage may vary.

Just as a friendly reminder, the Radeon Software Adrenalin 18.2.1 drivers add support for Final Fantasy 12: The Zodiac Age, while fixing a number of bugs with FreeSync and the Vulkan API, among others.