The Battlefield 1 system requirements are out, and you probably won’t be shocked to learn that they’re a little on the steep side. BF1 may be using “the most optimized” version of the Frostbite engine yet, as DICE director of technology Per-Olof Romell said, but this is still an intensive game we’re talking about if a Core i5 6600K is in its minimum specs. EA also talked a bit about some of the changes coming to BF1 as a result of the lessons learned in the open beta.

First up, the hardware. Hold on to your helmets.

In a separate blog post, EA said that as a result of feedback from the open beta, the Conquest mode is being changed so that capturing objectives and scoring kills will both contribute to the final score of a match, and the Rush game mode is being added.

“We’re also looking into balancing other elements, including the weapons and vehicles. The Light Tank, which is a bit too effective in the Open Beta, will definitely receive some work, and we agree that Horses can take a few too many rounds at the moment,” lead world designer Daniel Berlin explained. “We’ve also learned through the Beta that you guys need more tools to deal with vehicles earlier, which we’ll definitely look into (including a Gadget for the Support class which should help neutralize powerful vehicles).”

Battlefield 1 will be out on October 21.

Battlefield Twitter account notes that EA has now revealed all the maps and game modes from Battlefield 1. This post has a look at all the maps and this one covers game modes. This follows up on this post outlining things they learned from beta testing the World War I shooter. Here’s word:

But what does this mean? Well, first off I’d like to talk to you about the Conquest game mode. When we build a new Battlefield game it’s important for us to try new things, we want to stay fresh and renew the franchise with each new installment. However, it’s equally as important that we take the feedback that you, the community, are giving us. That is why we’re going to be making changes to the Conquest game mode ticket system for launch. The next time you play the game, capturing the objectives AND getting kills will both contribute towards the final score of a Conquest match. You have spoken, we have listened!

We have also been monitoring and listening to your comments in regards to the Rush game mode. It’s super exciting for us to bring back Rush for Battlefield 1, and we are aiming to make it the best Rush experience to date. We are making tweaks to the game mode as we speak with your feedback as the backbone to the entire process.

We’re also looking into balancing other elements, including the weapons and vehicles. The Light Tank, which is a bit too effective in the Open Beta, will definitely receive some work, and we agree that Horses can take a few too many rounds at the moment. We’ve also learned through the Beta that you guys need more tools to deal with vehicles earlier, which we’ll definitely look into (including a Gadget for the Support class which should help neutralize powerful vehicles). 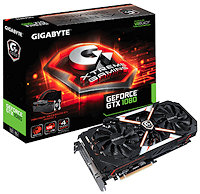 On our test bench today is the GIGABYTE GeForce GTX 1080 Xtreme Gaming Premium Pack video card. The specific model number is “GV-N1080XTREME-8GD Premium Pack” and is retailing for $700 and is in stock. This new video card from GIGABYTE dominates the high-end enthusiast market and offerings from GIGABYTE. If you want not only the fastest out-of-box video card we’ve evaluated but also something a little extra, this GIGABYTE Xtreme Gaming Premium Pack really does pack the premium.

In this review we check out a GeForce GTX 1080 that you will be able to hook up to your custom liquid cooling loop, it is the ZOTAC GeForce GTX 1080 ArcticStorm. We’ll check out the 8 GB GDDR5X beast with some sincerely lovely looks.

You can download the new GeForce 372.90 WHQL drivers from GeForce Experience and GeForce.com.

Today, independent UK developer, Rebellion, released the debut gameplay trailer for the latest title in the popular award-winning Sniper Elite franchise, Sniper Elite 4. Additionally, as a surprise to expectant fans of the third-person tactical shooter, Rebellion concluded the trailer with a teaser for the first downloadable content (DLC), TARGET FÜHRER – available now for FREE on PS4, Xbox One and PC to gamers who pre-order Sniper Elite 4 at retail or digitally via www.sniperelite4.com for $59.99.

With many millions of views on YouTube and countless gameplay hours logged, the series’ renowned Hitler-assassinating bonus missions have been a fan-pleasing tradition since Sniper Elite V2 and are back by popular demand. In TARGET FÜHRER, players will once again set their sights on history’s most notorious tyrant in a forgotten corner of the Mediterranean where a secret Nazi U-boat facility threatens Allied shipping. When agent Karl Fairburne attempts to assassinate the base’s Commander, he finds his target already dead, executed in person by a shadowy visitor. And with this, Karl’s mission has changed: TARGET FÜHRER!

Sniper Elite 4 pre-orders will include:

*Please note, pre-order availability may vary depending on region, platform and format.*

Sniper Elite 4 is a third-person tactical shooter combining genre-defining ballistics and emergent stealth tactics across the largest and most diverse environments ever seen in a Sniper Elite game. Set in the aftermath of its award-winning predecessor, Sniper Elite 4 continues the series’ World War II heritage by transporting players across the beautiful Italian peninsula, from sun-drenched Mediterranean coastal towns, to colossal Nazi mega structures, to daunting forests and giddying mountain monasteries inspired by Monte Cassino.

The dispute over the Spratly Islands in the South China Sea has reached a turning point.

China has never hidden her intent to extend her power in the region, both diplomatically and militarily. And the nearby countries have always tried to do the same, in temporary coalitions or alone. The United States, despite their interest in countering the Chinese’s ambitions, have been involved too much in the Middle East to be able to have a strong presence in these waters.

But now, Beijing has decided to raise the stakes deploying the aircraft carrier Liaoning, switching the balance of power in her favour.

How long this situation could last before it escalates in a larger conflict?

Spratly Spat, the third title in the Command LIVE series, has been released! This scenario is an exploration of what could happen if the regional powers around the Spratly Islands unite and – with limited assistance of the US – challenge the Chinese Navy!

Command Live: Spratly Spat is an expansion of Command: Modern Air / Naval Operations and requires the base game to be played

The Command LIVE News Team has just sent his last reportage, directly from the frontline!

Things are getting critical around the Spratly Islands, as China seems to have deployed her aircraft carrier PLAN Liaoning, and rumors of military exercises run by Vietnam, Philippines (with a limited support from the US) in the region have been confirmed!

Are we close to an open conflict in the South China Sea?

PC players looking for an inexpensive way to jump into Rainbow Six: Siege no longer have to wait to get their fix. Starting September 15th on Uplay, a special Starter Edition of the game will be available for $15/€15 on PC for a limited time. The Starter Edition offers the full Rainbow Six: Siege experience, with all maps and Operators available, but unlocking new Operators works a little differently.

If you’re familiar with the Starter Edition from June, it is exactly the same as last time. For new players, those who buy the Starter Edition will immediately get access to two Operators, along with 600 R6 Credits to spend on two more Operators (or other unlocks) of their choice. The two initially available Operators are randomly chosen from a pool of six – Rook, Sledge, Ash, Fuze, Mute, and Smoke –determined to be the most intuitive for entry-level players. Additional operators can be unlocked in the Starter Edition by earning 12,500 renown (compared to 500-2,000 renown in the Standard Edition).