All right, Agents, who’s ready for a field trip? Starting today for Year 1 Pass holders and July 30 for all players, Episode 1 – DC Outskirts: Expeditions introduces a host of free new adventures that take Agents outside of Washington, DC. Two new main missions let you pursue the modern-day Benedict Arnold, President Andrew Ellis, at Camp White Oak, and hunt the ruthless Outcast leader Emeline Shaw at the Manning National Zoo. A new mode, Expeditions, takes players to Kenly College on an episodic series of missions. A new wing of the college unlocks once a week; complete all three wings to earn valuable loot. And speaking of loot, a new exotic rifle, exotic gloves, and two new weapons (Stoner LMG and Carbine 7) can be found within Episode 1′s content. There are also two Classified Assignments — accessible to Year 1 Pass holders only — that take place in Washington’s Central Aquarium and NSA Site B13.

In addition to Episode 1, today’s free update also includes a new difficulty setting for the Operation Dark Hours raid. Discovery difficulty will allow Agents to matchmake with other players, if they so choose, and take on a more forgiving version of The Division 2′s first eight-player raid. Complete the raid on Discovery difficulty to earn hefty rewards, then give it a go on Normal difficulty for the chance to earn exotic loot.

There have also been major changes to the skill system (check out our State of the Game recap for more details) that create new opportunities for powerful skill-focused builds. And the crafting table can now create gear up to the maximum Gear Score, giving players more flexibility to craft their optimum loadout.

You can watch the Tom Clancy’s The Division 2: Episode 1 Launch Trailer HERE.

More game information can be found on the official Tom Clancy’s The Division 2 website.

NVIDIA today launched the GeForce RTX 2080 Super graphics card, priced at USD $699. The card replaces the RTX 2080 from this price-point, which will be sold at discounted prices of around $630, while stocks last. The RTX 2080 Super is based on the same 12 nm “TU104″ silicon as the original, but is bolstered on three fronts: first, it maxes out the “TU104″ by enabling all 3,072 CUDA cores. Second, it comes with increased GPU Boost frequency of 1815 MHz, compared to 1710 MHz of the original; and lastly it comes with the highest-clocked 15.5 Gbps GDDR6 memory solution.

The card ships with 8 GB of memory across a 256-bit wide memory bus, which at 15.5 Gbps works out to roughly 496 GB/s of memory bandwidth, a 11 percent increase over the original RTX 2080. Other specifications of the GeForce RTX 2080 Super include 192 TMUs, 64 ROPs, 48 RT cores, and 384 Tensor cores. NVIDIA is allowing its board partners to launch custom-design boards that start at the same $699 baseline.

NVIDIA today that their new GeForce RTX 2080 SUPER graphics card is now available worldwide. We have gathered a number of reviews on NVIDIA’S own GeForce RTX 2080 Super Founders Edition card, and from a few, but not all of their add-in-board (AIB) partners which include ASUS, Colorful, EVGA, Gainward, Galaxy, Gigabyte, Innovision 3D, MSI, Palit, PNY and Zotac. Click on the links below to find out how the Founders Edition card performs, along with many of the new custom cards.

You can download the GeForce 431.60 WHQL driver through GeForce Experience or via GeForce.com.

Ready to inspect your arsenal? Check out a prelude of the Multiplayer Universe Reveal to come!

The weapons bench is shrouded in darkness. Scattered ammunition is strewn about the surface of the bench. As we inspect the weapons, we discover a pistol lying next to some explosives. Nearby is a pack of grenades.

But we’re here to tool up with an assault rifle. Getting the right selection of attachments is vitally-important to your Multiplayer game. Thankfully, there’s an impressive array of options, as we cycle through some of the many customization options, at various times locking in a Muzzle Break, Balanced Suppressor, Scout Combat Optic, Lightweight Stock, CQB grip, Corp Combat and Holo Sight.

If you’re wanting to see raw 2v2 Gunfight gameplay the way it was meant to be seen, be sure to check out the following footage, recently posted by Infinity Ward.

Watch the Call of Duty: Modern Warfare 4K Gunfight Gameplay Trailer and read the rest of the article here. 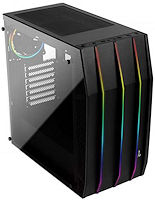 The Aerocool Klaw we are reviewing today looks like a menacing chassis that features a bulky front and plenty of glass. On top of that, there are RGB elements embedded in all fans as well as the front of the case. Don’t let its looks fool you as it is actually quite the affordable choice. Based on the same frame as the Tor, the Klaw aims to target a very different audience: the budget-conscious gamer.

And there’s a month-long free trial

Back in June, amid the hubbub of E3, Ubisoft announced that it was preparing to launch its own PC games subscription offering, Uplay+. At the time, a library of more than 100 titles was promised for launch, and the publisher has now confirmed the full list of games that will be available when the service arrives on 3rd September.

A Uplay+ subscription costs €14.99/$14.99 USD a month (an official UK price is yet to be confirmed) and provides access to Uplay’s full PC games library, which, as you’d expect, includes all of Ubisoft’s blockbuster franchises – so the likes of Assassin’s Creed, Watch Dogs, and Far Cry are, unsurprisingly, accounted for – plus all of the publisher’s upcoming titles, including Gods & Monsters and Watch Dogs Legion.

There’s ample representation of classic series from Ubisoft’s enormous back catalogue too – Rayman, Splinter Cell, Prince of Persia, and The Settlers get a good airing, for instance – alongside the Steeps, Starlinks, and The Crews of this world.

New Game Mode ‘Mercenaries’ Will Be Available From July 18th

Ubisoft has announced a free brand new game mode for Tom Clancy’s Ghost Recon: Wildlands, “Mercenaries”, which will be available from July 18th . Mercenaries is an eight-player free-for-all PvPvE gameplay experience. The objective is to call for rescue, locate and reach the extraction point, then be the first to board the chopper. The new game mode will be available on the PlayStation®4 computer entertainment system, the Xbox One family of devices including Xbox One X and Windows PC.

At the beginning of the match, the extraction point is unknown and players will have no ranged weapons, gear or items. Players will need to locate and activate radio transmitters to shrink the possible extract zone on the map. In the meantime, players will fight to be the first to gain intel on transmitter locations while looting gear, weapons and money. After the first player has activated three transmitters, the chopper will head to the extraction point and once landed, the location will be revealed to everyone. The first player to fill their extraction gauge and board the chopper wins.

Mercenaries mode introduces a wealth of new mechanics including:

Tom Clancy’s Ghost Recon: Wildlands also has a Rewards Program available to all players until September 27th, 2019. Jump back into the Wildlands, complete the set challenges, and redeem special rewards in Tom Clancy’s Ghost Recon Breakpoint. All rewards will also unlock unique ‘Memories of the Wildlands’ dialogues. More information can be found at: ghostrecon.com/RewardsProgram

The series portrays battles spanning from 1948 to 1979. Each scenario is played on a unique, historical map with nine view modes. Scenario maps are based on topographic maps from the period created on a hex grid. Hexes are 250 meters across.

Each scenario is based on a painstakingly researched historical engagement and has a variable number of turns in which you and your opponent attempt to achieve the maximum number of victory points, usually by destroying your opponent’s forces or by capturing objective locations. A wide variety of battle situations are represented in the game, including firebase defense, helicopter air assaults, meeting engagements, trench defenses, armored breakthroughs, battles of attrition, mobile defenses, search and destroy, and more.

The development of the game is progressing very fast and we are happy to show you screenshots featuring the Battle of Rung Sat and the encirclement of A Shau Camp.