AMD has released Radeon Software Adrenalin 21.11.2 drivers, which come just in time for the Early Access release of “Battlefield 2042″ later today. The game’s general release is slated for November 19. Tested at 4K UHD with Ultra settings, the new drivers up to 14% higher performance over previous drivers for the RX 6900 XT, up to 15% higher performance for the RX 6800 XT, and up to 11% higher for the RX 6700 XT. The company did not put out any bug-fixes with this release.

Among the issues fixed are a game crash at launch with “WRC 9 FIA World Rally Championship,” a texture flickering bug with “Ghost Recon Breakpoint,” a crash-to-desktop at launch with “Transport Fever,” a null pointer error with “Transport Fever 2,” over “blooming” with “Quake II RTX,” a game crash with “FarCry 6″ in DirectX 12 mode with RTX 3070 Ti, random freezes with “Detroit: Become Human,” a TDR crash with “Red Dead Redemption 2,” and random crashes with “Call of Duty: Black Ops Cold War.”

You can download the GeForce 496.76 WHQL Game Ready drivers via GeForce.com.

A few days in, Champion Hill is one of a handful of stand-out features.

Call of Duty: Vanguard’s multiplayer is fast, fun, and more than anything, familiar. There are some great new additions by way of expanded game modes, including the excellent new Champion Hill, but if you’d told me I was playing a patched version of Call of Duty: World War II or a reskinned Black Ops: Cold War (which itself felt like a reskinned Modern Warfare) I would probably have believed you, you devious trickster.

A fun, truly cinematic campaign that lacks variety over its brief runtime.

Call of Duty: Vanguard’s campaign starts off on the right track – literally. An explosive train sequence through a burning Hamburg, Germany thrills as you jump between carriages, fending off dozens of angry Nazis on your way to a submarine base. It’s a cinematic opening to a game that wears its film influences proudly; whether that be the tense behind-enemy-lines aspects of D-Day in The Longest Day or the vivid depictions of the Pacific in Terence Malick’s The Thin Red Line. No shadow hangs heavier over this latest Call of Duty World War II story, however, than Inglourious Basterds. Its tale of a small group of expert soldiers on a secret mission to stop the Third Reich may sound familiar to anyone who has seen the 2009 movie, but Vanguard plays it with a much straighter face than Tarantino ever could. Even so, Vanguard’s campaign is over quickly, and its small series of battles are all too rarely memorable high points.

Call of Duty: Vanguard is now available for PC, Xbox, and PlayStation, putting out the call for players to reenlist in the military shooter series in a return to a World War II setting. The Windows edition is for sale on the Battle.net Shop as either a Standard Edition or an Ultimate Edition with additional skins and blueprints, a battle pass bundle, and an XP booster. The game kicks off with a solo campaign, a new zombies experience, and 20 multiplayer maps with crossplay support between PC and consoles. A new season of Warzone will kick off on December 2nd, bringing the free-to-play battle royale to the war in the Pacific. Here’s the previously released Launch Trailer featuring Jack White along with more details:

In Vanguard, players will experience the origins of Special Forces fighting across four major theaters of World War II like never seen before.

With development led by Sledgehammer Games, Vanguard enlists players in an engaging blockbuster campaign as ordinary soldiers from diverse backgrounds rise on all fronts to do the extraordinary and turn the tides of war. Multiplayer features 20 maps, 12 Operators and over three dozen Weapons in the revamped Gunsmith all starting day one. Vanguard multiplayer delivers new ways to play with the Combat Pacing system and the fast and frenetic multi-arena survival Champion Hill mode. Vanguard also brings a franchise-first Zombies crossover developed by Treyarch, expanding upon the Dark Aether storyline that players were introduced to in Call of Duty®: Black Ops Cold War. 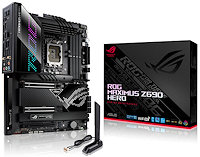 The embargo on independent reviews of the Alder Lake-S desktop series has officially lifted.  Now available from retailers, the six unlocked desktop processors are the first based on Intel’s performance hybrid architecture featuring a combination of Performance-cores (P-cores), the highest performing CPU core Intel has built, and Efficient-cores (E-cores), designed for scalable multi-threaded workload performance. We have gathered a number of reviews on the new 12th Gen processors, and they are featured via the links below.

AMD has put out the first Radeon Software release for the month of November 2021, with the Radeon Software Adrenalin 21.11.1 beta. These drivers add optimization for “Call of Duty: Vanguard,” and “Forza Horizon 5.” For the latter, the drivers provide a massive 23% performance gain at 4K with “extreme” settings over the previous driver, as tested on a machine with an RX 6800 XT graphics card. A couple of issues have been fixed. Samsung Odyssey G9 C49G95T monitors were showing up display corruption with their resolution set at 5120 x 1440 @ 240 Hz, which has been fixed. Certain visual artifacts in the menu screen of “Call of Duty: Warzone,” have been fixed.