The Lion Falls in Hearts of Iron IV History Trailer

In a dark alternate timeline, a weakened United Kingdom falls to the overwhelming might of the Third Reich. In a new trailer for Hearts of Iron IV, you can watch the key events in the fall of Europe’s last hope as played out in the game’s Clausewitz engine. Paradox Development Studio presents Operation Sea Lion as a success:

The trailer shows air strikes on the British homeland, combat around the capital and demonstrates how players can follow the war on the map through descriptive arrows and animation. In Hearts of Iron IV, like all Paradox grand strategy games, history changes the moment you start your game.

Hearts of Iron IV will be your chance to revisit the last titanic military struggle between the world’s greatest powers. You have complete control over a nation’s industry, military doctrine, political goals and strategic planning. Assign your fleets and air wings to areas of operation, draft your invasion plans and keep your war economy running by protecting your convoys.

Hearts of Iron IV will be a 2016 release on major digital distributors.

For more information on Hearts of Iron IV, check out the games official website. 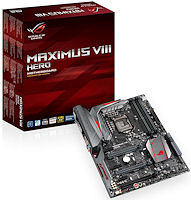 In this review we test the ASUS Z170 ROG Maximus VIII Hero. If you fire it up with that new 14nm Skylake based Core i7 6700K processor this product will bring a smile to your face. The Maximus VIII Hero comes with a ROG black & grey design with red accents. Add to that the hippest features of 2015 and you are sure you’ll have the right infrastructure for gaming de-li-cious product.

NVIDIA released its latest version of the GeForce driver software. Version 355.60 WHQL features the “Game Ready” moniker, as it’s released just in time for “Ashes of the Singularity,” a new RTS in the space-opera setting. Developed by Stardock, this game is one of the first to feature DirectX 12 support. In addition, the drivers include a beta version of NVIDIA’s GameWorks VR SDK. Besides optimizations for “Ashes of the Singularity,” the drivers add SLI profiles for “Devil May Cry 4: Special Edition,” and “Next Car Game: Wreckfest.”

You can download the new GeForce 355.60 WHQL drivers from GeForce Experience and GeForce.com.

Mount & Blade II: Bannerlord has been in development since the release of Warband in 2010 and features an all new engine, developed specifically for the game

Releasing these eight screenshots, TaleWorlds confirmed the development of Mount & Blade II: Bannerlord, the next installment in the much beloved Mount & Blade series. Set 200 years before the events of Mount & Blade: Warband, the game delivers on player requests for richer lore by including an optional storyline into the sandbox environment. It features dynamically changing seasons, crafting, a working ingame economy driven by ever-changing supply and demand, and more.

Siege battles now feature a variety of machinery with full player control over how to breach the walls, catering for deep strategic thinking and dramatic assaults.

Gaijin Entertainment has unveiled a new video for War Thunder, showcasing this MMO simulator based on WW2 history. War Thunder offers a highly detailed and personalized aviation experience, giving players access to hundreds models of planes with detailed cockpits, dozens of upgradeable weapons and flying skills that can be honed and improved with each mission.

Wargaming has announced that the German Tech Tree is preparing to cast off for World of Warships. This new lineup will set sail in October, with visitors to this year’s Gamescom getting exclusive hands-on experience with famed German warships, including the iconic Dresden and Admiral Hipper, far ahead of their release.

The World of Warships zone within the massive Wargaming Gamescom booth will be the only place where players can test the versatility of the Dresden and Hermelin cruisers, as well as discover the might of the Bismarck and Tirpitz battleships. Visitors will also get the chance to see how these warships operate while pitting them against other nations already in game for the very first time.

The German cruisers making their in-game debut boast remarkable endurance, especially at higher tiers, making them great for surviving tough encounters. Heavy German cruisers also feature solid armor and devastating weaponry fitting for any battle at sea. The German line has strong penetration, but even better damage per minute and outstanding missile velocity, which makes for an intimidating force in close-range combat.

“The World of Warships team is really excited to be adding the German national line into the game,” said Danila Volkov, World of Warships Development Director. “German shipbuilding has produced truly daunting and diverse warships. These vessels open up a whole new set of tactics for players and add additional depth to gameplay.”

To stay up-to-date with all the latest developments, visit our official website.

In support of the virtual troops, Bohemia Interactive today released a brand new video for its military shooter Arma 3, providing useful tips on how to operate effectively as a machine gun team.

Aimed at anyone with an interest in tactical gameplay, the video covers some of the basic principles behind gunnery and target engagement, positioning on the battlefield, suppression techniques, and the separate roles in a machine gun team.

Get more game info at the official Arma 3 website.

Deep Silver has released a pair of fresh videos (Redzone & Thank You) and five more screenshots for Homefront: The Revolution showcasing this game due to launch in spring 2016, for PC, Xbox One, PS4, Linux and Mac. This is a free-roaming FPS that throws players into a near future dystopia. Catastrophic events have brought the United States to its knees and enabled the Korean People’s Army forces to impose a brutal military occupation. Trapped in this American nightmare, Philadelphia has become a police state, where surveillance drones and armored patrols keep her once-proud citizens at heel, crushing any dissent with totalitarian force.

To overcome their oppressors, players will have to engage in guerrilla warfare and use ambush, infiltration and hit and run tactics in un-scripted firefights. At every turn they’ll find a sprawling open-world city, in which recruiting fellow revolutionaries and building improvised homebrew weapons are just two of the keys to creating a powerful resistance force. Homefront: The Revolution will also support up to four players in online co-op gameplay where you form your own resistance cell and become renowned as Heroes of the Revolution.

Find out more at the official Homefront: The Revolution website.

Paradox Interactive has unveiled a new video and eleven fresh screenshots for Hearts of Iron IV, a game by Paradox Development Studio that challenges players to face the brutal conflict of World War II in a multifaceted grand strategy game, where history can be fully relived or rewritten from the perspective of a global superpower attempting to change the world, or a small nation simply trying to survive.

Hearts of Iron IV aims to be the most authentic real-time simulation of World War II to date, with authentic historical figures battling on land, sea, and air with period-accurate armies, vehicles, and newly discovered weapons of mass destruction – along with plenty of diplomatic and trade tactics.

Find out more about the game at the official Hearts of Iron IV website.