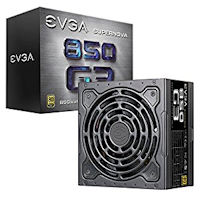 EVGA refreshed its popular G2 PSU family with the G3 one using Super Flower’s Leadex II platform. The 850 G3 is the second strongest member in this line-up, offering high performance and a depth of just 15cm. The SuperNOVA G3 units are based on a fresh Leadex II platform, and their most obvious upgrade over the G2 series is more compact dimensions. Packing higher capacity into smaller enclosures affects what we refer to as power density. Increasingly, PSU vendors are trying to do battle based on this concept of power density. Not long ago, SilverStone was the only company that really put an effort into shrinking its power supplies. Now the list is a lot longer.