Developer Obsidian Entertainment and global publisher My.com present the newest addition to Armored Warfare – Update 0.14. Today, players can compete or co-operate on new maps, share, and relive their battles through the added replays feature and lead the pack with the bloodthirsty Wolf edition vehicles.

Other features introduced with update 0.14:

Mare Nostrum adds new depth to many parts of the classic empire builder, including new options for the merchant republics. These tiny financially motivated states can now form Trade Leagues, uniting their commercial might in a military and a mercantile alliance that makes everyone richer and stronger.

The expansion also introduces new mercenary options with greater control over your naval missions, the chance to rent your armies as condottieri, and the ability to share maps with your neighbors.

A new developer video with Creative Director Johan Andersson outlines some of the coming changes.

And, even if you pass on buying Mare Nostrum, April 5 will also be the occasion for a substantial free update for all Europa Universalis players. This massive patch will add new features, which will enhance the player experience. The update will include:

And even more changes to game balance, AI and modding triggers.

M2H and Blackmill Games announce the release of Horrors of War, a new free expansion for Verdun 1914-1918, their first-person shooter set in the trenches of World War I. This trailer shows off some of the content (and the gore) in the expansion, which they describe as “massive,” as it includes new units, a new region, new weapons and animations, and a new co-op game mode. This post has the details, and here is a bit:

With this expansion we offer more diverse historical battles in an immersive environment. Soldiers are confronted with more WW1 situations such as fighting during the night, offensive battles, more varied squads and a host of new weaponry that calls for careful tactical maneuvering. The realistic WW1 atmosphere has been strengthened with a new animation blending system, dismemberment, more blood, more corpses and a whole new region; Champagne.

Find out more about Verdun 1914-1918 at the games official website.

A World War 2 themed Metal Gear Solid. Who doesn’t want to play that?

Sniper Elite, Rebellion’s stealth action hybrid, is back, and it’s looking more handsome than ever. Cut free from the last generation of hardware – unlike Sniper Elite 3, this one’s exclusive to Xbox One, PS4 and PC – it’s looking mighty fine, even, all the rough edges that marked the series before smoothed out. Sniper Elite’s evolved from guilty pleasure to reliably enjoyable entertainment. This one could be a seriously good video game.

The setting’s switched up from the North Africa of Sniper Elite 3 to Italy just before its invasion in September 1943. It’s afforded Rebellion some gorgeous locales – in a brief hands-off demo we’re shown the bay, alongside a level set in sumptuous countryside under the imposing shadow of a grand viaduct – as well as a little more breathing space. Sandbox games such as this love throwing around grand statistics, so try this one on for size: the smallest level in Sniper Elite 4 is three times the size of the biggest one seen in its predecessor.

In Automatron, the mysterious Mechanist has unleashed a horde of evil robots into the Commonwealth, including the devious Robobrain. Hunt them down and harvest their parts to build and mod your own custom robot companions. Choose from hundreds of mods; mixing limbs, armour, abilities, and weapons such as the all-new lightning chain gun. Even customise their paint schemes and choose their voices! (For characters level 15 or higher.)

Automatron marks the first add-on release for Fallout 4. In April, we’re expanding the capabilities of settlements with Wasteland Workshop, and in May, travel beyond the Commonwealth to Maine for Far Harbor – the largest landmass Bethesda Game Studios has ever created for post-release content. And, that’s just the beginning, with even more add-ons to be released in 2016. Stay tuned for more details on free updates like Survival Mode and the Creation Kit, which will allow you to create mods on the PC and then share and play them across all platforms, including consoles.

We review the new 700 Watt Pure Power 9 CM 700W Power Supply from Be Quiet! The series has been fiddled and fooled around with and comes with some new tweaks, features and hey now, is an 80 Plus Silver certified product series. With the ever-growing demand of power consumption this is a highly modular, with two 12V rails (for this 700 watt model), highly energy efficient product that remains very silent. 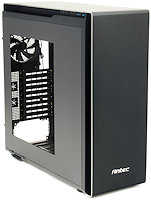 Today we’re going to take a look at a bit of an older case made by Antec, named the P380. This case was originally unveiled for CES 2015 and launched several months later. Antec was always one of the go-to companies for PC cases, but over the years the Antec name has slipped away in favor of other brands. Let’s take a look and see what Antec is up to with this case.

Learn About The Crushing Power of an Elite Class of Vehicles

Developer Obsidian Entertainment and global publisher My.com are pleased to showcase an important class of vehicles: the Armored Fighting Vehicles. The Armored Fighting Vehicles are the scouting stars of Armored Warfare, with an extremely good view range, along with being very fast and hard to detect thanks to their generally limited sizes. At the top of the food chain, in the war for vision, is the Combat Reconnaissance Assault Buggy (CRAB), developed by Panhard, a French manufacturer of light tactical military vehicles. Its main role on the battlefield is to seek enemy vehicles for their teammates to target and destroy.

More information on the CRAB can be found here.