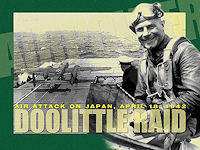 The English speaking Japanese propaganda radio broadcaster stood atop the radio station building in downtown Tokyo speaking into his microphone on a sunny mid April spring day. He spoke of the warm sunny weather and about the city’s social events planned for that day, ranging from a cherry blossom parade to the two baseball games scheduled for that afternoon. He happily rhapsodized philosophically about the invincible strength of Imperial Japan and how of all the many nations now at war in the Pacific, only Japan was free from any fear of aerial bombing because the skies above were filled with iron defenses. Suddenly, the ear shattering wail of an air raid siren was heard, followed by an unbroken string of Japanese curses ending with “Bakayro!!” (Bastards!) Several hundred miles away, aboard an American aircraft carrier task force Admiral William Halsey listened to the static filled Japanese radio broadcast before smiling an evil grin. The B-25 medium bombers he so recently launched from the carrier USS Hornet were now bombing Tokyo. Lieutenant Colonel Jimmy Doolittle, the mission’s leader had done the seemingly impossible.