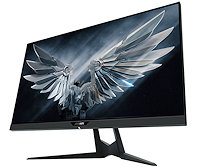 Over a year has passed since Aorus made its debut on the PC gaming monitor scene. The Gigabyte subsidiary’s first effort, dubbed the AD27QD Tactical Display, was generally well received as a competitively-priced 27in FreeSync solution offering basic HDR support and fast 144Hz action at a QHD resolution.

Entering the market shortly after the announcement of Nvidia’s G-Sync Compatible program helped heighten the AD27QD’s appeal – said panel was one of the first FreeSync solutions we’d tested on GeForce hardware – and Aorus is now hoping to build on those solid foundations with a choice of refreshed flat panels offering speeds of up to 165Hz.