Strategic Command WWII: War in Europe is the ground-breaking next step in the highly acclaimed Strategic Command series of turn based strategy games. Building on the success of previous versions covering both world wars, Strategic Command is returning the series to its roots as a hex based game, complete with a new engine, new graphics, and lots of new features too!

This latest Strategic Command game retains the best of the previous games in the series, including their accessibility and ease of play, while adding a whole lot more!

Strategic Command WWII: War in Europe is currently in Beta. You can apply for it here.

Fans of the story-driven, hardcore first-person action MMORPG/FPS – Escape from Tarkov, will get a fresh look at the game today in a newly released gameplay trailer. The new video features over 14 minutes of in-game footage, following a soldier as he attempts to escape an abandoned (but not un-guarded) chemical factory, slipping past scavengers and searching the factory for anything to help him escape the city of Tarkov.

Escape from Tarkov is a hardcore story-driven MMO featuring elements of FPS and RPG. The events take place in the Russian city of Tarkov, which has been sealed of by roadblocks and sunk into the chaos of local warfare between private military companies. Escape from Tarkov’s Hazardous Environment Combat Simulator employs a number of custom system modules to create incredibly immersive gameplay and make players feel the reality of what is happening in the game.

More info on Escape from Tarkov can be found at the game’s official page.

As expected, the Summer Sale is now underway on Steam, or as they’re calling this year’s installment the Summer Picnic Sale. We can probably find more details when an announcement rolls in, but in the meantime, we can see that there are the usual discounts to be had, and this year’s side game involves getting three free trading cards each day. Initial sales are for things like LEGO games for 30-75% off, the Arma franchise for 20-80% off, and the Call of Duty franchise for 50-67% off.

EA’s Battlelog has details on how to pick up Battlefield 4 Second Assault for free for the coming week (June 21 to June 28), offering a 100% discount on this DLC for owners of Battlefield 4. In the same update they also offer details about a new community challenge in the military shooter sequel that will reward participants with gold backpacks (perfect camouflage for battles in Fort Knox) if the community can manage 25,000,000 collective revives over the next week. Battlefield 4 Second Assault includes four maps that hearken back to the old days of Battlefield 3. Here’s a trailer promoting the giveaway.

Middle East! Once a place of advanced civilizations, now is a land plagued by dozens of cruel conflicts. Technology has made possible for small armies to deliver devastating blows to unprepared enemies and, as a consequence, new military canons have been introduced, innovating the entire warfare.

Campaign Series: Middle East 1948-1985 is a turn-based, tactical wargame that focuses on conflicts in the Middle East and today it has received its first major update!

Version 1.02 is now available and it brings a lot of improvements and incredible additions! The graphics have been overhaul improved (in both 3D and 2D mode), several new scenarios have been introduced, the Ode to Arab-Israeli Wars scenario mod has been included, and more!

The changelog is very long, so be sure to check it here!

Get more information on Campaign Series: Middle East 1948 – 1985 from its official product page.

Prepare for the battle which shaped the fate of America: Gettysburg: The Tide Turns is coming soon on PC and Steam!

Gettysburg: The Tide Turns, is a turn-based wargame where players will be able to take command of Union or Confederate forces in the iconic battle of Gettysburg in July of 1863.

The game is easy to learn thanks to its clear and minimalistic interface but it is challenging for its innovative activation system. Inspired by board-games, the turn system randomizes when each division moves and fights so each replaying of the famous battle will feel different from the previous one. You will need to learn how to react to ever changing tactical situations.

With tons of period units including infantry, cavalry and artillery and an accurately recreated order of battle, your decisions and military performances will play a crucial role in defining the outcome.

The game will soon go into Beta, and if you’d like to contribute to the bug-fixing process, you can apply here!

Lead your army, face your enemy and win the battle!

More game information, a teaser trailer and screenshots are available on the Gettysburg: The Tide Turns official webpage.

Thirty Years’ War has been updated to version 1.01 and this update it’s very huge!

A lot of improvements and bug fixes have been added, enhancing the game’s experience significantly!

Among all the changes, now the cost for Protestant Artillery have been reduced, the AI behaviour during winter months is improved (now she can look for a city to pass the winter months if she has supply problems) and now during sieges you have to be careful about the “desease event”!

Take a look at the entire changelog following this link!

Paradox Interactive announces what they call the grand success of their recent grand strategy releases. They explain: “Hearts of Iron IV, Paradox’s recently released World War II-themed grand strategy game, has sold over 200,000 copies worldwide in less than two weeks after its release, making it the publisher’s fastest-selling historical strategy game to date. Stellaris, the developer’s first sci-fi grand strategy title, has now sold over 500,000 copies worldwide in just over a month since its release in early May. Finally, Europa Universalis IV, Paradox’s iconic world-conquest grand strategy game, has now sold over 1 million copies worldwide, not including sales of expansions and other downloadable content (DLC) for the core game.” They celebrate the news with the release of free musical DLC for Europa Universalis IV and plans for a livestream later today:

To celebrate these milestones, Paradox is offering a new musical add-on for Europa Universalis IV to all players for free for a limited time. Starting today and lasting through July 4, 2016, the new DLC “Fredman’s Epistles” can be downloaded from Steam at no charge, adding a collection of traditional Swedish songs from the 18th century to the game’s soundtrack. The songs, arranged from original works by famed Swedish poet and songwriter Carl Michael Bellman, provide an authentic piece of Swedish culture to Europa Universalis IV, perfect for taking on the world as a Scandinavian superpower. Following the limited free release, Fredman’s Epistles will remain available for 1.99$ from digital retailers.

To further celebrate the one million Europa Universalis IV players the developers will host a special stream on June 21st, 15.00-18.00 CEST, where they will play the oldest available version of the game and talk about its’ development. 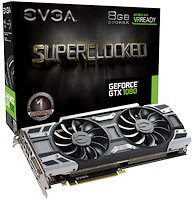 Its now been a few weeks since NVIDIA officially launched their GTX 1080 during that time we have seen plenty of redesigns from board partners. Due to the staggered launch dates between the Founders Edition and these custom cards, many potential buyers have waited before taking a plunge into the $600+ GPU market. There’s good reason for that: the GTX 1080 Founders Edition may be a massively powerful card but it tended to throttle under load and overclocking headroom wasn’t all that great. Hence the expectation for these particular cards is quite high and EVGA’s GTX 1080 Superclocked ACX 3.0 is arguably one of the most eagerly anticipated.