As the front line spread eastward, the air war reached into the operational area of the crack 6 IAK of the Moscow PVO. The 6 IAK included units equipped with Aleksandr Yakovlevs first fighter, the superb Yak 1.

On the 1st of July 401 IAP was sent to the Berezina-Dnieper front. The commander of this unit was American born Podpolkovnik Stepan Suprun, one of the most experienced Soviet pilots of the time. Suprun had been decorated as Hero of the Soviet Union in 1940, and had personally tested more than a hundred aircraft types

On this day the pilots of 401 IAP put up five or six sorties, claiming several kills. Surprun himself scored four kills this day. KG 53 Legion Condor, under the command of Oberst Paul Weitkus, lost four He 111s on the 1st of July.

Elsewhere, Leytenant Nikolay Terekhin of 161 IAP scored three victories in an unusual manner. His flight of six I-16s had just landed at Minsk after a combat mission when a formation of German bombers, probably He 111s of KG 53, began raining bombs on their base. Terekhin had used all his ammunition, but took off immediately in his Polikarpov fighter, and climbed rapidly to meet the bombers. 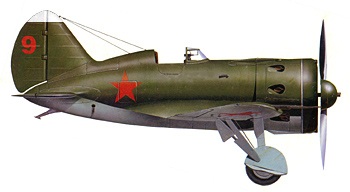 
When the tiny I-16 flew for the first time in December 1933, it was far ahead of any other fighter design in the world, featuring retractable landing gear, a cantilever wing and variable pitch propeller. Although not among the best remembered aircraft of the thirties, it was nevertheless a very able and rugged machine.


The Story ContinuesTerekhin closed rapidly on the rear bomber in the stream. The dorsal gunner began firing, but Terekhin ignored him and huddled down in the cockpit as he rapidly closed on the He 111. 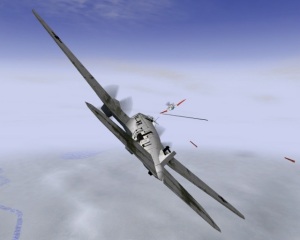 Terekhin strikes the He 111.


All four planes began plummeting to earth, the three Luftwaffe bombers and the I-16. Six or seven parachutes blossomed in the air, but the combat wasnt finished yet. 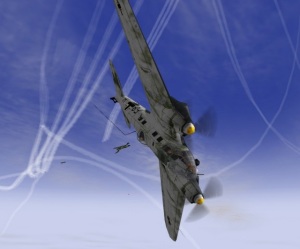 
As they hung from their parachutes, the German airmen who had pistols began firing at Terekhin, and he fired back with his own pistol.

As they landed behind Soviet lines, the German fliers were disarmed and tied up with a rope by members of a collective farm. Terekhin asked for a vehicle, and was given a farm truck to use to ferry his captives to the nearest headquarters.

Dismounting from the truck at the HQ of 43 IAD, astonished onlookers saw the German fliers following Terekhin, roped together like cattle. Terekhin burst into the Generals office with his pistol in one hand and the rope holding the tied up Luftwaffe fliers in the other.

The report above is taken from Black Cross, Red Star by Christer Bergstrom and Andrey Mikhailov. Published by Pacifica Military History, 2001.

Semyon Mironov Takes on an He 111In this narrative I take on the persona of Semyon Mironov. This "I was there" perspective is fun to work with and gives you a sense of the flavor of the game in combat.

55 IAP was commanded by Kapitan Fyodor Atrashkevich at Beltsy Airdrome in Moldavia.

I am part of 55 IAP, a MiG-3 Eskadrilya stationed at Beltsy Airdrome.

The fighting has been intense. In the last week alone we have lost 18 aircraft and 10 pilots to the Germans. Yesterday Stepan Gudonov was killed in a lone battle against four Bf109s after he shot down a single Bf109 and attempted to ram another.

Today I am flying with Kapitan Atrashkevich.

Our aircraft are warm and ready to go when we are alerted to the presence a lone Henschel Hs 126 reconnaissance plane over the base. This alert is particularly acute, since the Kapitans family is housed in the barracks after their village was virtually flattened by Ju 88s only three days before.

We taxi to the runway and Atrashkevich lifts off. I follow next, and Nikolay and Sergey follow next.

The Hs 126 is nowhere in sight, although the weather is fairly clear. Suddenly we spot two dots to the west, and then two more dots and the Kapitan breaks to the left.

We are closing rapidly, and they look to be four He 111 bombers heading directly for our Airdrome. I look behind and Nikolay is following, but Sergey has had to turn back with smoke coming from his engine. I am not sure what is wrong, but we dont carry radio transmitters. The Kapitans aircraft does have an RT but it is only for use to communicate with ground control, and it rarely works anyway.

Now the He 111s are beginning to turn. We bank with them but we will no longer be able to meet them head on, and they will bring more of their guns to bear on us.

As we close rapidly we are about 30 degrees off the nose of the bombers. Kapitan Atrashkevich triggers his guns and now we are all firing. We slash through the formation, and I hear a couple of hits on my airframe. My engine is not affected and the aircraft feels secure. I jab the fire button to test my guns and nothing happens. They are jammed or the control has been hit!

To my left I see that Nikolays MiG is smoking and there is a large hole in his rudder. He is using ailerons to control his aircraft, but is having difficulty staying with us as we bank around. Ahead and to my right Kapitan Atrashkevich appears to be fine. He signals to Nikolay to break off and return to base.

I signal him that my guns are jammed and I will keep trying. He gives me permission to follow him through the formation again.

As we look toward the bombers we see the engine of the left flanking aircraft burst into flame. I silently thank God, and we continue to race out ahead of the formation. 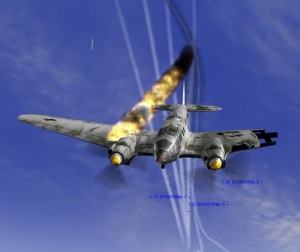 
Our base is now southeast of the formation, but they are banking back toward their original course. We will do our utmost to prevent them from dropping their bombs. It is now that I decide what to do. If my guns will not fire by the time we attack, I will try to ram one of the bombers with my wing. My MiG 3 is quite sturdy, and I believe I can survive the attack or at least bail out and take one bomber with me.

We are roughly 6 km ahead of the three bombers. The fourth is far below now and has turned toward home, smoke trailing from the damaged engine. We begin our turn back toward the three, angling to the left to force them to turn to their left and away from our base.

I am jamming my gun trigger but there is no effect. As we rapidly close I break left and high, intending to loop in behind the He 111 on the outside left of the formation. My MiG takes another hit, but my engine remains smooth and the controls are responsive.

Kapitan Atrashkevich has damaged the engine of the lead bomber, and now it falls out of formation and banks away left. I watch as he pursues, intent on the kill. 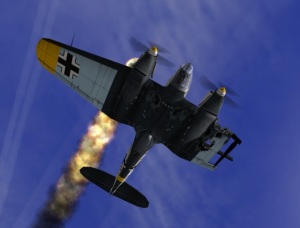 
Now I am behind the left Heinkel and closely rapidly. The belly gunner is firing and I am hunched behind the solid bulk of the rotary engine. It is unlikely that I will be hit, but he may destroy my engine. 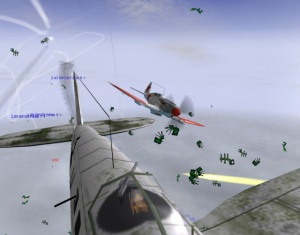 Closing rapidly while pieces fly off.


I begin to roll my MiG to the left, and I am close enough to see the eyes of the navigator, who watches with astonishment as he begins to suspect my purpose. 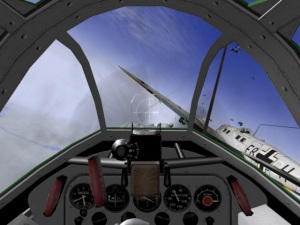 Rolling to the left. 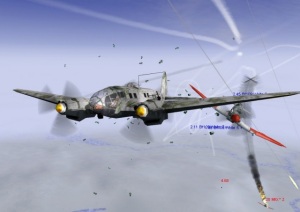 A moment before impact.


Contact! My aircraft lurches and groans and I hear the tearing of my wing. Then I am clear and I see that I have lost the outer third of my wing, but I glance back and see that the Heinkel has lost half of her port wing, and her left engine is ablaze. Victory! 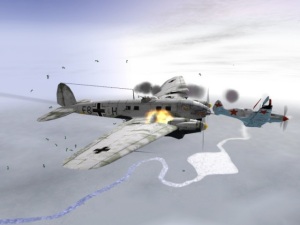 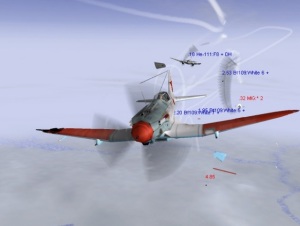 A moment after collision.


My reliable MiG is surprisingly stable, though I must use half left rudder to remain level. I look back to see the Heinkel increasing speed in a dive earthward, and the other Heinkel has banked away and to the right and is turning for home. The Kapitan is looping up above for a diving attack.

It is time for me to head home. I will hope for some Vodka and a loaf of warm bread.