In the first two previews we looked at views and padlock, the cockpit itself, and the raw beauty of IL-2. This time well cruise the COMMS system, discuss aspects of the fighting AI, then look at some images of damage and various aircraft.

In the pre-beta build COMMS are not finished. But even the unfinished jewel shows its form. 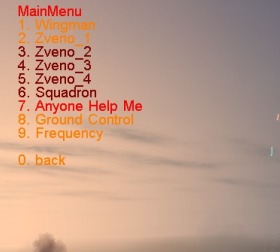 
The menu shown here is the first level, accessed with the TAB key. You can see that the format is fairly standard.

But the menu reveals two things: 1) it is specific to a Soviet COMMS system, therefore the Luftwaffe menu will be slightly different, and 2) it allows control of individual flight members as well as the squadron.

One item that we havent seen before in a combat prop simulation is Ground Control. Since IL-2 emphasizes air to ground action on the Soviet side, it makes sense that a ground controller will often be available.

The second level of communications is accessed by selecting an item from the initial menu. The orange items in the 1st level main menu are the active items. When I selected 1 for Wingman, the second menu popped up. Again, the items are fairly standard. 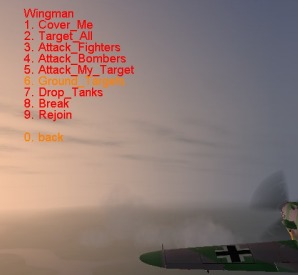 
When I selected option # 2. Zveno_1 from the st level main menu, another sub-menu level came up, shown next. 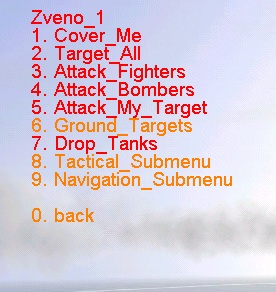 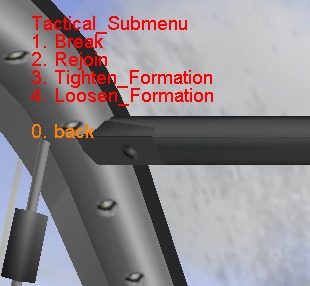 
Fighting AIIn the pre-beta preview copy there are two missions that may be flown and about six track files to run. The two missions are an escort mission (Ju-87's) and a ground support mission. 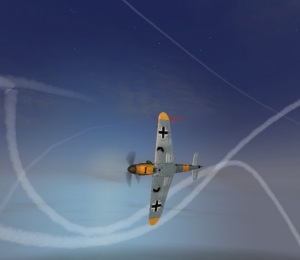 Bf-109 amongst those awesome contrails


The escort mission places the pilot in the air slightly ahead of a Gruppe of Ju-87's and about eight km from incoming Lavochkin LaGG's, mostly LaGG-2's but at least one LaGG-3. The AI I would guess is at a moderate level, the LaGG's are not overly aggressive and I don t have any trouble getting on their tails.

I do, however, find it a challenge to get kills quickly. I find it difficult to hold the Bf-109 back---its easy to overshoot the intended quarry. And I also find that the bobbing and weaving of the LaGG's, combined with the small hit bubble, allows for plenty of challenge.

After playing this mission through a dozen times or so, Ive learned some things about the LaGG. At the mission start altitude of around 1400 meters I can out turn the LaGG-2. At higher altitude, the sustained turn rate of the LaGG appears to match the Bf-109's. At higher altitude, its a boom-n-zoom game, since the LaGG doesnt come close to the climb rate of the Bf-109.

In this mission the Bf-109 has only wing machine guns and a single 20mm nose cannon.

Initially I thought the LaGG's might be cheating with respect to horizon and ground orientation, but before long I saw one hit the ground while trying to evade me. I narrowly escaped the same fate.

The ground support mission is a very different game. In this mission the Bf-109 is weighted down with an extra pair of wing cannons, 20 mm or Mk 108s. Firing all five guns creates one impressive amount of smoke. So far I havent had any guns jam, which would likely create some significant yaw.

In this mission the challenge is not to get on the tail of an IL-2, the challenge is to get under an IL-2 and survive. I ran the mission through a number of times before scoring my first kill, and even then I had a piece of my starboard wing missing and was leaking fuel or something.

Here are a series of images showing my initial encounter with a LaGG-2 in the first mission.


Here are a series of images showing different encounters with the IL-2 Sturmovik itself. 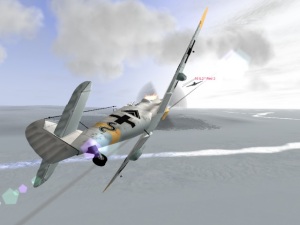 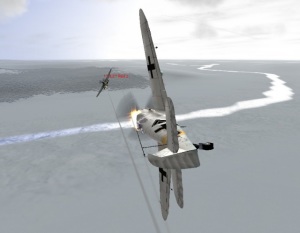 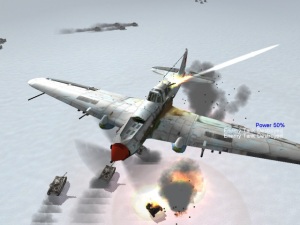 Rear gunner at work. Note the dust trails from tanks on ground.


Damage and PhysicsAfter a few hours of IL-2 I doubt if there is any going back. EAW fans who experience this simulation will be permanently parking that simulation. There is simply too much improvement and one is quickly spoiled.

After my first half hour I knew there was something profoundly different in this simulation. I simply was not getting the hits I thought I should get. I closed the gap before firing and found I started getting hits. I also recorded a number of track files to observe where my bullets were going. 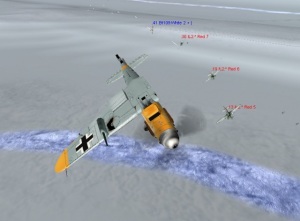 
Unfortunately, I cant record track files in EAW to make a comparison, but even in comparison to Rowan's Battle of Britain I was not scoring as many hits. The obvious conclusion is that the hit bubble on high levels of realism is MUCH smaller in IL-2. Im not sure that there is a hit bubble per se; the player may have to actually hit the object to score a hit.

Also unlike Battle of Britain, bullets are tracked individually and they do drop. Ballistics and physics are simulated for the bullets and tracers. One must now take that into account when firing. 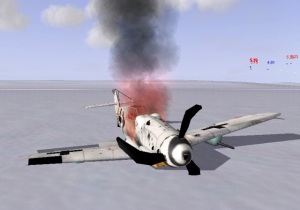 
The damage model is incomplete, but I have observed progressive damage of various kinds. Sitting on the tail of an IL-2 and pounding away is a great way to observe damage! 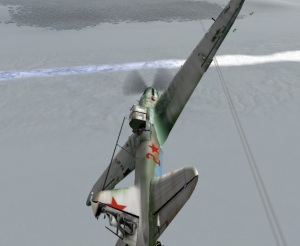 
Ive also seen pilots and gunners bail out. It seems the pilot goes first, but this may be unfinished AI, unless someone knows about these things!

Ive found landings unforgiving, but impressive. The overall atmosphere with clouds and incredible lighting effects leaves me feeling like Im really entering the pattern as I pan the view to keep track of the airstrip. The airstrips are the best I have seen yet and sense of speed down low is excellent.

The amount of drag generated by gear down in the Bf-109 may need to be tweaked, but it is substantial. I have to open up the throttle as soon as I drop the gear and one notch of flaps. The Bf-109 isnt easy to land it drops quickly if you arent careful. Touching down first on one wheel and watching the smoke appear behind the wheel is very cool. 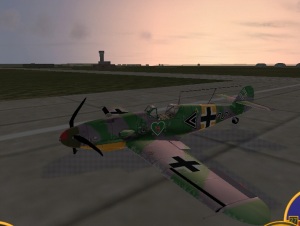 This is NOT a good landing. 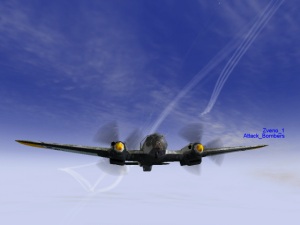 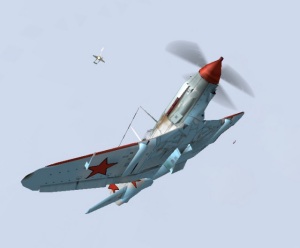 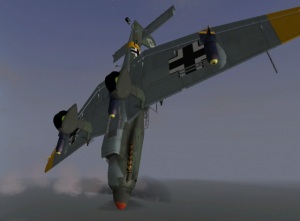 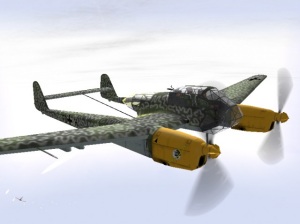 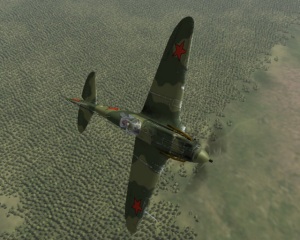 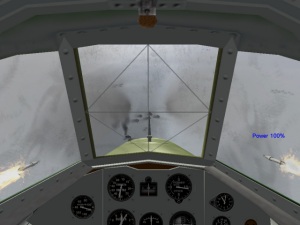 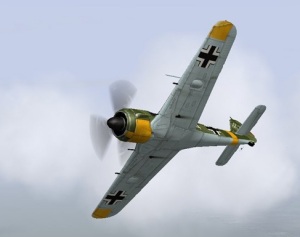