Rage Softwares Eurofighter Typhoon (EF Typhoon) is almost complete. In the first article in this series we looked at the heritage of EF Typhoon in EF2000 and F22: Total Air War. This time well talk about the sim itself.

In EF Typhoon, pilots will be fighting against the clock. The scenario features a multi-national force with pilots drawn from the member nations. To ensure maximum tension, the Typhoon has been placed in a very tough situation against superior numbers with limited intelligence. 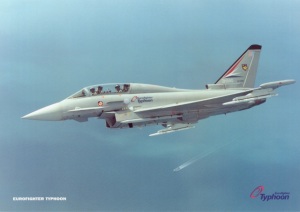 
"The most modern fighter that I had flown previously is the F-16 and I tend to compare Eurofighter to the F-16 with a much superior engine performance. Compared to the F-16 Block 50, the Eurofighter maximum take-off weight is typically only 20% higher but we have 40% more thrust.

"Even more significant is the fact that the high thrust of the PW229 is reached by an almost 100% augmentation in reheat so when we compare dry power, Eurofighter has 75% more thrust."

Now just a second, Chris, did I hear that right? Eurofighter has 75% more DRY thrust than an F-16 Block 50? That is simply stunning. Originally posted by Valleyboy after the Farnborough Air Show:

"They had Eurofighter flying there........ You have NEVER seen something do what that did at the air show! Full burn off the runway, and straight into the vertical.....straight up! And that was before it got 1/3 of the way down the runway!"

"Supersonic performance is also assisted by the canard delta-wing design of the aircraft and the variable air intakes. Operational performance is further enhanced by four under-fuselage AMRAAM stations in addition to the underwing hardpoints, very advanced auto-pilot and auto-throttles and of course, the carefree handling which prevents stressing the aircraft or departing from controlled flight."

Features like this will make Typhoon another great simulation for the novice. One of the beauties of Total Air War was that it could be equally enjoyed by serious sim flyers as well as the weekend pilots. Chris Worning continues:

"Tactical information is presented on three of the best multifunction displays I have ever seen. Compared to the F-16, this provides around 2.5 times more display area.

"The high degree of automation greatly reduces pilot workload compared to earlier designs and the house-keeping tasks of the pilot—monitoring systems, such as electrics and hydraulics—has almost been eliminated in normal conditions." 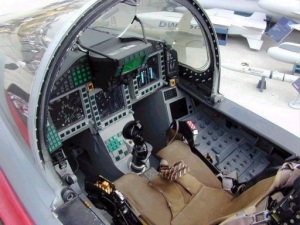 
Two and a half times more display area than the F-16; thats a LOT of room for information. Typhoon will use the no-cockpit on screen MFD system that will be familiar to Total Air War pilots. A head-down mode for the MFDs will also be available.

More on the aircraft itself comes from Eurofighter.org: 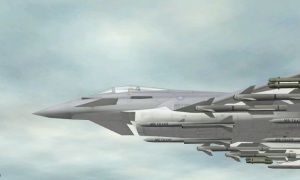 [Ed. Note: At the time of this article's publication, the Eurofighter.com website was temporarily closed for a re-design.]

Andy Bush, the retired fighter pilot and beta tester for EF Typhoon, recently commented on the FM that,

"Typhoons flight model is better than either EF2000 or TAW and the aerodynamic influence of weight is modeled. A configuration with external tanks and stores shows a dramatic reduction in top speed, ceiling and turn rate, just as one might expect. 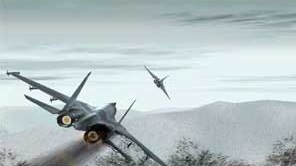 
"General handling is OK. Roll rates are very crisp as is the case with modern RL fighters. The feel is similar to the F-22 in DID's F-22 ADF/TAW. Nose stability is good, with none of the 'bobbing' that some of the recent sims have. The jet is a steady gun platform under all maneuvering conditions.

"There is no player input for the rudder. When necessary, the AI makes the rudder input for you. This is particularly evident at high AOA and slow speed, yawed conditions. Rudder movement is easily seen in the external views under these conditions, and the direction of movement seems correct for the situation."

Andys only concern was excessive thrust. But since the Typhoon may well be the most powerful (thrust to weight) fighter platform yet seen, and as noted above is an incredibly powerful aircraft, Andys expectations could be off. Well have to wait and see. 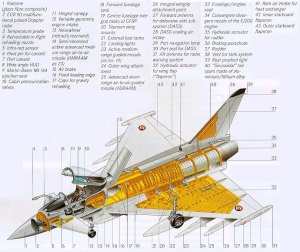 
Typhoon will model the DASS (Defensive Aids Subsystem) as Digital Image Design (DiD) also did in EF2000. The DASS is internally housed and provides an all-round prioritised assessment of air-to-air and surface-to-air threats with fully automated response to single or multiple threats. The system worked great in EF2000 and simplified the pilots task greatly.

Next generation weapons like ASRAAM will be there, and the AMRAAM has been replaced by Meteor (the S-225 in EF2000). This extra long reach missile, more advanced than even the well known Phoenix, will be available in limited supply in the game. 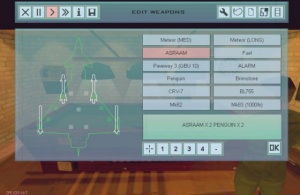 
EF Typhoon has multi-weapon racks, so load-outs for ground pounding will be substantial. Air-to-ground weapons include Stormshadow, ALARM and Brimstone. 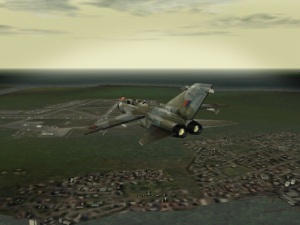 
Like Total Air War, EF Typhoon will feature a fully dynamic campaign. In fact the campaign runs in real time and like Falcon 4.0 and Razorwork's Enemy Engaged: Comanche vs. Hokum continues to run whether you fly or not. Like Jane's USAF, you can hot swap between pilots, with the AI taking over for the aircraft you left.

"Typhoon has a dynamic air war and ground war, a resource model, and a tactical and strategic system. Layered on top of all this is a story line in a scripted event system. When events are triggered they inject new units into the dynamic system. Once these units have been passed to the campaign system the AI decides how best to use them. The important thing here is that even though events are triggered the outcome of those events is dynamic." —Don Whiteford of Rage Software

In fact, the WARGEN strategic AI system has continued to evolve, and this is its third iteration. This is one of the great advantages of building on a series of products. While flight sim fans may think its cheating to utilize old code, it allows a developer to minimize development effort in one part of the simulation and thus pour more effort into other components.

In the case of EF Typhoon this mean starting with WARGEN II and then expanding and tweaking the campaign AI system. The result is an updated and more powerful campaign system for EF Typhoon. While the scope of the game is much smaller than that of Total Air War, the depth of the campaign is even greater. Steve Hunt comments: 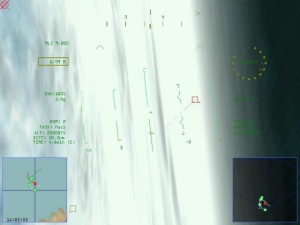 No cockpit view in Typhoon


"The WARGEN engine was rewritten for TAW [F22: Total Air War] and it's the TAW engine at the heart of Typhoon. The main areas we've added are: a fully dynamic ground war, resource modeling, territory system and strategic planner. In addition to this we've also added an extra-theatre module. This allows us to model global effects and influences on the theatre of conflict."

One of the areas where Total Air War was weak was that aircraft were respawned and the battle just continued until sufficient destruction of enemy infrastructure had occurred. Not so in EF Typhoon. There is no respawning of aircraft, and the ground war, like the air war, is completely dynamic. Furthermore, the ground and air wars are fully integrated with the overarching strategic system.

In EF Typhoon we will have control over six pilots; once they are dead the game is over. The players interaction with the pilots is continuous  you must feed, sleep, and fly them. Control is via the full 3D view, and includes the mess and ready room environment, adding to immersion. 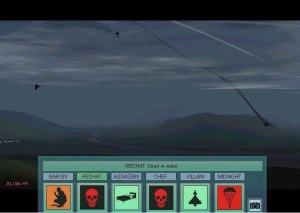 
"We listened to sim fans, they want to feel like they are a pilot in a real conflict - this means pressure, hard work, excitement, and fear. You need to look after the six pilots in Typhoon 24 hours a-day non-stop. If they die youve lost them, and the war." —Steve Hunt of Rage Software.

EF Typhoon uses an upgraded version of the 3Dream engine. Minimum system requirements are a Pentium 266mhz or equivalent, with DX 7 compatible 3D board with at minimum least 8Mb of memory. A Pentium II 400 is better, and a 16 MB or better video board is ideal.