In 1993 a small development group in England released TFX: Tactical Fighter Experiment, for the PC. The graphics were very sophisticated for the time: 640x480 with 256 colors and gourad shading. The simulation was interesting, but lack of documentation and some hardware issues kept me from spending much time in the game.


Back in those days I was flying MicroProse's F-15 Strike Eagle III and loving it. My system was an Intel 486, 66MHz CPU with 16MB of RAM.

Not long after I purchased TFX I heard a rumor that Digital Image Design, or "DiD" as it was called, was working on a sequel to TFX. Next I discovered that TFX II would be called EF2000, and then I read a preview somewhere and was hooked. I wrote to DiD and was accepted as an outside beta tester.

Meanwhile, in Volume 4, No. 3 of INTERCEPT, the black and white dedicated combat flight simulation magazine that was published for a time by SIMCAP out of Kingston, NY, Eric "Reckless" Pearson described EF2000 in beta form.

Digital Image Design's EF2000 is a huge leap in flight simulation technology. This advancement comes with a high price - it requires a Pentium for smooth graphics in high resolution. Software packages that have such high requirements on the hardware risk losing a significant portion of the game market. On the other hand, many flight simulation fans bought math coprocessors to play Falcon 3.0, so it is possible . . .

As DiD was planning this product, they had to weigh the realism factor for every feature against the speed or hardware penalty. In the end, they chose no compromises . . . 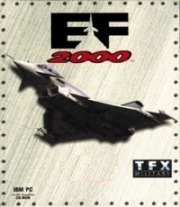 
I still remember the beta team for EF2000. We complained about the usual things, and many of our suggestions were heeded. We all enjoyed the experience, especially as the TACTCOM and Super (Windows and 3dfx) versions were released the following year. Back in those days, CJ Martin hadn't been snapped up by JANE'S yet, and Clark Janes contributed with the rest of us to an extensive online manual for EF2000 (still available here on COMBATSIM.COM - click here to view).

The minimum system requirements for EF2000 were listed on the box as a 486 DX66 with 8 MB of RAM and 12 MB of hard disk space. But the reviewers were consistent in recommending a Pentium 90 for smooth game play. And we beta testers were badgering DiD for an upgrade that would support the latest hot hardware: the first 3dfx Voodoo boards. 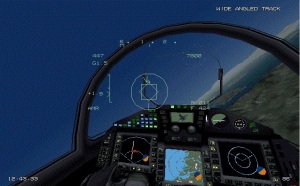 
In November of 1995 DiD released EF2000, an innovative simulation that went on to win a number of awards. The campaign mode was incredible, and coop multiplayer missions were supported (though not in campaign mode). Squadrons sprang up all over the internet for coop single missions, and there are STILL people playing this game.

As the design progressed the game was extremely broad in scope; too broad, in fact. As development time increased it was decided to divide the single concept in two, and release two games in sequence.

TFX III (A) - Air Dominance Fighter:
The first, F22: Air Dominance Fighter (F22: ADF) was released in December of '97 with a linear campaign and a basic mission planner. The AWACS mode that would allow strategic control of the air war and the fully dynamic campaign would show up in the next release. 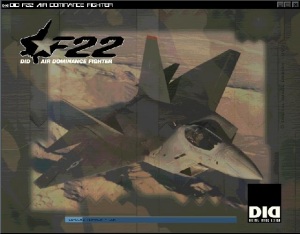 
The total package of F22: ADF was innovative enough that DiD scooped TWO Top Games Industry 'Oscars' at the Milia d'Or Awards Ceremony in Cannes, France in February. This was the FIRST time that Milia d'Or had awarded first prize to a military simulation.

TFX III (B) - Total Air War:
F22: Total Air War (F22: TAW) was huge in concept. Fly the war or control the airspace. A full mission planner allowed choosing of targets and weapons and deciding the composition of the strike force. The player could fly single missions, training missions, or one of ten dynamic campaigns. We could even jump from the AWACS god's eye view into any battle that involved the F22.

The system requirements for F22: TAW were virtually the same as for F22: ADF. Minimum specs called for a Pentium 166 with 16 MB, and recommended system was P200 or better with 32 MB RAM and 3dfx video board. The game ran well on 4MB video hardware, and total install was around 100 MB. 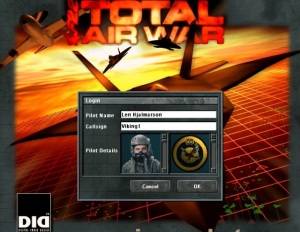 
The splitting of TFX III into two products dulled the anticipation somewhat, but in spite of that the genius of the product was obvious. The F22's pilot-friendly systems resulted in a relatively light learning curve. Even the novice could survive easily post patch, because the stealth characteristics of the F22 meant that so long as you weren't in visual range, you were almost invisible.

F22: TAW's appeal was broad in scope. It was fun for the novice, but deep in concept. The action was excellent, and under 3dfx the game looked fantastic at 800x600. F22: TAW sported a real-time, fully dynamic campaign system, the third iteration of DiD's wargame engine called WARGEN, and it was the first campaign to be built on the theories of Col. John Warden, III, and the five ring model of strategic warfare. The following is from DiD's old U.S. web site:

The Five Rings process is derived from the 1990-1991 work of USAF Colonel John A. Warden III and his followers during the build up and execution of the Gulf War. Col. Warden convinced Gulf War commander, Gen. Norman A. Schwarzkopf, of the need to adopt a radically different strategy and warfighting template for his battle with Iraq. Warden's basic premise was that all nation states consist of five concentric rings—or centers of gravity—the innermost ring being leadership, then key production, infrastructure, population, and-finally-fielded military forces. 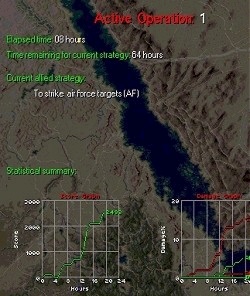 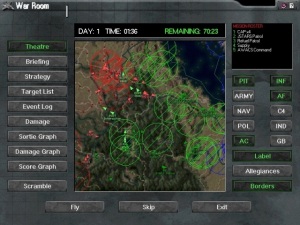 
Prior to the ascendancy of air power, the only way to subdue a nation state was first to engage and then destroy the opponent's fielded military forces. Until that was accomplished, the other centers of gravity (i.e. all other areas vital to the survival, continued functioning, and will of the nation state) would be impossible to reach. With air power, this is no longer the case. All aspects of a nation state are vulnerable to attack and destruction by air power from the onset of hostilities.

Having said that, Warden and others believe that leadership is the real key to success or failure in war. When an enemy's leaders decide they had enough, they sue for peace-or someone takes power away from them. For that reason, every action in war should be geared to affecting the enemy's leadership directly or indirectly. 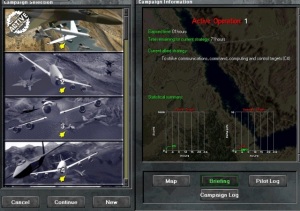 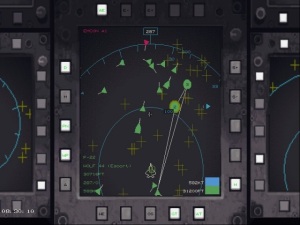 
The campaign in F22: TAW consisted of ten different tactical scenarios and had some great features, both in terms of ability to monitor progress as well as the guiding intelligence. The player could monitor flights via the AWACS map, or check out strategic information from the War Room interface.

The capstone was the integration of the Theatre Command and AWACS modes and the ability to play the strategic game and still fly any time. Immersion was greatly enhanced by DiD's smart view system, which was available in real time even in the AWACS interface.

F22: TAW was the first simulation where I spent more than a couple of hours at a single turn. I once flew in the same F22 for almost four hours straight, landing to rearm and refuel and then taking to the skies again. When I was finally wounded I limped home and jumped back into the strategic game.

F22: TAW is currently the oldest simulation resident on my hard drive. 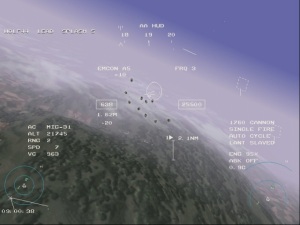 No cockpit display in TAW 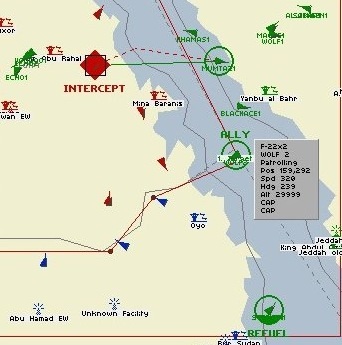 
TFX IV - Eurofighter TyphoonHere we are almost four years beyond F22: Total Air War. Eurofigher Typhoon (EF Typhoon) was announced approximately two and a half years ago. Things have changed in the combat simulation scene, and early in 2000 some of the crew working on EF Typhoon at DiD left the company. Not long afterward DiD was purchased by RAGE software, and some expressed doubt as to whether EF Typhoon would ever see the light of day. Many wondered if we had another Microprose / Falcon 4.0 scenario in the making. 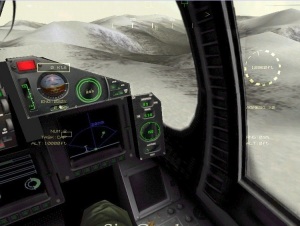 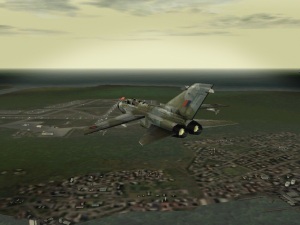 
EF Typhoon is alive and well, however, and the release date is set for May 4th. That's good news, because the EF2000 and F22: Total Air War legacies are strong, and EF Typhoon looks to be reaching back to DiD's roots, where it was less about systems and hardware and more about the environment and the pilots.

The setting for EF Typhoon is the year 2015, with a communist revival in Russia. Russian invades Latvia, Lithuania and Estonia, then NATO protests and the war escalates in Europe. Iceland is of vital strategic importance for resupply of Europe from the US and protection of the shipping lanes. Russia recognizes the strategic importance of Iceland and sets out to capture the island. NATO responds with a small force where the centerpiece is the new EuroFighter Typhoon fighter jet.

Now that I've covered the history leading up to EF Typhoon, I'll continue to cover it in a series of articles from preview and interview through to full review and strategy guides. So stay tuned!