Requiring the original game to play, Resistance immerses players in a new campaign, with intriguingly different play style, that forms a prequel to the original games plot and is set years before Operation Flashpoints Cold War hit crisis point. Check out the COMBATSIM.COM interview with, Jonathon Smith, the External Development Studio Head at Codemasters.

Mustang Vs Fw 190 Add-on Released
Just Flight has released, Mustang Vs Fw 190, their latest add-on for Combat Flight Simulator 2 and Flight Simulator 2002. Features include sliding canopies, rolling wheels, moving suspension and even working drop tanks!. There are new paint schemes available to download or you can use Flight Ones Text-O-Matic to create your own. Also included is two custom scenery areas of original airfields, Bodney and Abbeville. Fly 18 unique new missions for CFS2 spread across two challenging campaigns. Screenshots.

X-Plane Demo/Upgrade V6.20
There is a new version 6.20 of X-Plane, the comprehensive flight simulation by Laminar Research. This release adds more flight model improvements, a variety of new features, some gameplay refinements, and a couple of bug fixes. As usual you can use a patch from the previous v6.16, or a full upgrade from any older version (which also serves as a time-limited demo). Download

Boeing has delivered the first of 10 new F-15E Strike Eagles it's currently producing for the U.S. Air Force. The aircraft is the 227th Strike Eagle built at the company's St. Louis facility. The Republic of Korea in April selected the F-15K, a derivative of the F-15E, as its next-generation fighter.

Raytheon Receives U.S. Navy Award for F/A-18 Radar Warning Receivers
Raytheon Company has been awarded a contract option of $33 million for production of its ALR-67(V)3 radar warning receiver system for the U.S. Navy's F/A-18E/F aircraft. The Lot 4 production award represents the second option to the full rate production Lot 2 contract, which began in July 2000. Low rate initial production of the system began in June 1998, followed by full rate production (Lot 1) in August 1999. The current award was received from the U.S. Navy's Naval Air Systems Command in Patuxent River, Md., and calls for the delivery of 28 radar warning receivers. Deliveries of the system under the Lot 4 contract will begin in June 2004 and are expected to be complete by January 2005. 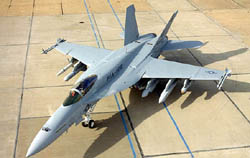