There may be more first-person shooters around than ever before, but Codemasters havent been put off. Theyve crafted another add-on to the highly successful and award winning Operation Flashpoint: Cold War Crisis: Operation Flashpoint: Resistance gives you a new campaign on a new graphically enhanced island, along with a lot of other goodies.

I got to ask Jonathon Smith, the External Development Studio Head at Codemasters some questions about Operation Flashpoint: Resistance and heres what he had to say.

Robert Shaw (R.S.): How does the story line go with Resistance?

Jonathan Smith (J.S.): In the new Resistance campaign, you'll play the part of Victor Troska, an ex-Special Forces soldier who's turned his back on a troubled past to settle back home, only to find his peace shattered by a Soviet invasion. The action takes place a few years before the action of Cold War Crisis, and features some of the same characters. As Victor, you'll have to make some key choices early on about your allegiance and destinythen, build up a force capable of forcing back the Soviet occupation.

J.S. Answering both of these questions together: along with the new single-player campaign, we've improved almost every aspect of the original game. You'll notice significant graphical improvements, including an impressively superior terrain-smoothing algorithm, higher-detailed textures and characters, new foliage and tree-drawing systems, new special effects, new buildings and landscape features.

For the multiplayer gamer, the game's netcode has been fundamentally overhauled and further optimised for Internet play. Additionally, there are a number of new weapons and vehicles, along with standalone single missions and multiplayer missions. And we've added a few fresh gameplay elements too. We think it's nothing less than the best and most complete expansion ever produced for a PC game.


R.S. With a better graphics engine whats different and does it make any difference to the current Operation Flashpoint?

J.S. The overall effect is a significant increase in visual realism. Most of the new features only apply to the new Resistance island of Nogova.

J.S. To get the most out of the new visuals, you'll need a slightly better system than previously.


R.S. What do you feel is the best part of Resistance?

J.S. The expansiveness of the entire packagebut, if I had to pick one individual feature, it would probably be the new "persistence" of equipment and personnel from one campaign mission to the next. This works brilliantly with the storyline, as Victor aims to build up his forces from nothing, to create a single-player game even more compelling than the original.

R.S. Are there any surprises in store with the Resistance add-on?

J.S. Of course, but if I told you what they were, they wouldn't be surprises any more, would they?


R.S. How much more are you going to offer in the way of add-ons for Operation Flashpoint?

J.S. Resistance certainly marks a major milestone in the game's development, and takes it to a whole new level. We'll have to see how things go in the future.

R.S. Do you have any other games of this genre in the offing?

J.S. Bandwagonning an in-vogue theme is probably not a sound foundation for a computer game of quality; however, there are certainly other kinds of conflict settings than the Cold War which could be interestingly explored in an Operation Flashpoint context. Again, the only message here has to be "wait and see".


R.S. Thank you for your time and we at COMBATSIM wish you all the very best with the release of Resistance.

J.S. Thank *you* for your supportand that of all your readers. 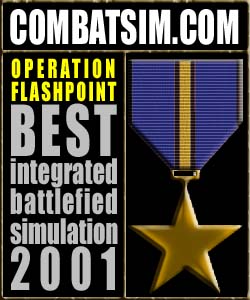