B-17 Flying Fortress: The Mighty 8th!
by Len "Viking1" Hjalmarson


IntroductionStratos Eagle is just passing 30,000 feet on the outbound leg of her journey to the French coast. The clouds are drifting by lazily, and the contrails from her flight in the cold air stream out behind her like a white silk scarf. Far below the white caps are flickering across the deep blue ocean.

Just as the Navigator identifies the French coast a flak battery opens up. Its the first time Ive seen flak, and the iridescent clouds that quickly shade into black fascinate me with their beauty. A moment later I hear Mitch in the tail gun cry out with pain and surprise. Deadly beauty flowers outside my window. I bend back to my map as Captain Reynolds calls out, Fighters at 1 oclock high! 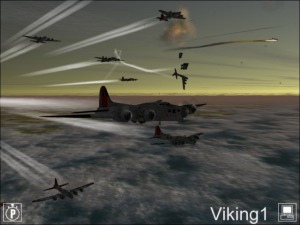 The Raw Beauty of B17


B17 defies easy evaluation because it is less a military flight simulation than a combat experience. Waywards choice of title reflects the reality that the machine was worthless without the courage and determination of the men that populated the Flying Fortresses. The simulation reflects that understanding, modeling the aircraft and its crew in the European theatre of combat.

With B17 II we have a first in simulation design: a virtual community in the air in every bomber. Waywards simulation is truly a genre-bender, combining elements of 1st Person Shooter, role-playing, and military flight simulation. The challenge is to appeal to the traditional simulation crowd while broadening the appeal to combat action fans.

When I first ran the beta in September, I was amazed. Not only was the code stable, but the game looked incredible, with an ambience that rivaled anything I had ever experienced on the PC. In short, B17 was immersive in the extreme. It drew one into the combat world of strategic air warfare in WWII. From the perspective of appeal, B17 was set for success.

Leveraging the power of modern PCs, the aircraft and the environment look, feel and sound like the real thing, lacking only the smell of cordite and aviation fuel.

April, 1934. Boeing and Martin put forward designs for a long range airplane suitable for military purposes, with Boeing offering the Model 294, a prototype for which was ordered the following year. The design was massive, with a 149 foot wingspan. But the XB-15 suffered delays and was overtaken by the next bomber design, the Model 299.

16 July, 1935. The prototype for Model 299 was rolled out, flying for the first time on July 28th. The next month it was paraded at Wright Field, as Boeings entry for the US Armys competition to supply the Air Corps with a new medium bomber. Times were tough, and Boeing desperately needed to win the competition. The Army Air Corps would evaluate the contenders on the basis of a circular proposal.

The proposal actually suggested a twin engine design, but Boeing boldly took a risk with a four engine design. The prototype was hailed by Boeing PR department as the worlds first four-engine all-metal monoplane bomber.

The design impressed the journalists, and Richard L. Williams of the Seattle Daily Times captioned his photograph of the shining new airplane as the 15 ton Flying Fortress. The raised gun positions seemed to fit the description, which also captured the imagination of the public.

The design won the competition, and 14 aircraft were ordered. Little did anyone foresee how important the Fort would become, or how many design revisions would occur, and how many aircraft would eventually take to the skies.

Europe, 1943. The Western Allies had agreed to take the war to the Germans first, with the Japanese taking second priority. While forces were being gathered for an invasion of the Continent, the USAAF joined the RAF in an air offensive against the enemy. The US element participating in the conflict initially was the 8th Air Force, based in England. The 8th carried out daring daylight missions on targets deep within Germany, without fighter support. The chief vehicle of those raids was the B17.

B-17 Flying Fortress: The Mighty 8th!The contribution of a simulated crew to the experience is compelling. For example, I came into a flak field over the target near the port of Brest in a campaign mission. Having previously read about flak, I was expecting to be impressed. I wasnt disappointed, and I gained an appreciation for flak that I could never otherwise have obtained. If you have a good surround sound system and a decent size monitor, flak fields will induce nightmares. 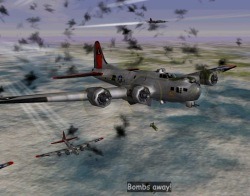 
"Most of the time when you are over enemy territory you have a funny feeling, particularly when you can see flak, you know that it can hurt, but you look out there and it's fascinating because it comes up like a little armless dwarf. There's a round puff here and then there's usually two strings that come out of the bottom like legs, and this thing will appear out of nothing. You don't see any shell; you don't hear anything. You just see this little puff of smoke and then shortly after, it sounds like somebody is throwing gravel all over the airplane. You're fascinated by it. You know it can hurt you very badly, but you're fascinated by it... you watch it. It's kind of like watching a snake." -W.W. Ford, formerly with the 92nd Bomb Group (H), Eighth USAAF. From BOMBERS, by Philip Kaplan.