B-17 Tweaks and Tips
by Len "Viking1" Hjalmarson

The ThrustMaster website hosted the first B-17 Tips Guide, and there you can find some answers to common questions. Which ordnance do I select for which target? How do I transfer a crewman out of one Fortress and into another? The manual doesnt contain this latter information anywhere.

This tweaks briefing will have a different focus. First, many have noticed that simply using the default route to the target doesnt always put you at an advantageous position for the bomb run. Better recon photos would help! Blaze has been hard at work to make our lives easier.

Secondly, many have been playing with one of the database files that instructs B17 AI in a huge variety of circumstances. Ive done some tweaking of my own, and Ill tell you all about it here. The increased action is intense!

Using Recon Photos in B17

Blaze has been using recon photos as a good source for lineup direction on his target runs. He noted that the recon plane always flew from the west. He decreased the flight altitudes from 8000 feet to 6000 feet to getter better images. 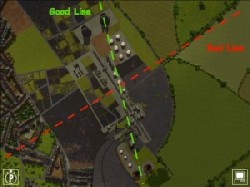 
Using recon images, you can decide the best approach to the target. If the target is layed out with an orientation from north to south, for example, you dont want your formation bombing from west to east! You need this information in advance to set the waypoints for the flight in Squadron Commander mode. Alternatively, once the mission starts you can go to the Navigators chair and alter the waypoints.

These screen shots, taken by Blaze, show the problem.

The red line shows the default approach to this oil facility near Hamburg. Following this course would most likely only allow low or moderate damage, while a 'stick' along the green line should lead to total destruction of the target. 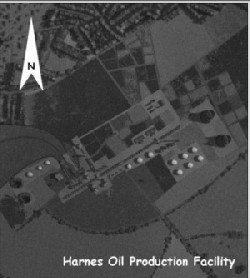 
Blaze has been building create special recon "photos", with an added indicator for the general direction. These photos can be printed out and used to adjust the final waypoints during the mission, or you can use Alt-Tab to get to your desktop out and check them in any image viewer.

Blaze is working on more files at
Blaze

Examining this file has revealed a number of limitations set by the designers of B17 to limit the load on an average system. If you happen to have 256MB of memory, however, combined with a PIII class processor at 800MHz or higher, you can get much better action and even increase your mission success rate.

First, the DB file allows the user to set the default size of escort and intercept squadrons! The setting for both is 4. 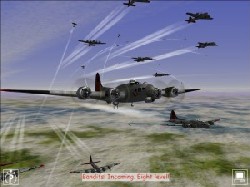 That's What I call ACTION


It was a surprise to me to learn that enemy bases become inactive once the flight that launched from the base has landed or been shot down. This means that no more aircraft will take off from that base.

Initially, I changed this so that the enemy bases would be always active. I discovered, however, that the game would slow to a crawl by the time I reached the target area. It seems as though the program is keeping track of every aircraft, even those shot down. This is just a guess on my part, but the effect was to move my system from an average of 22 fps to 3 fps by the middle of the mission!

I changed the line in the DB file back to 0 for off.

The DB file also makes it possible to set the number of active bases. The default setting is 3. I changed this to 5.

Next I improved the toughness of some of the fighter aircraft. I increased survivability of the Me-262's slightly, which seemed to be exploding about 8/10 when hit. My reading of actual Luftwaffe accounts is that many damaged Me-262's did in fact survive. I have read accounts from both Adolf Galland and Gunther Rall surviving in Me-262's on more than one occasion with a damaged engine. I have reduced the jet engine weakness factor slightly (about 15%) and also made P-47s and Fw-190's 10% tougher.

The maximum G loading lines in the default file are as follows:

I adjusted these settings as follows:

Even with the early G-suits worn by the P-51 pilots, the default numbers seemed high. I reduced the max negative G loading for P-51's to 6.0 from 9.5. Negative G's are much more difficult to manage than positive G's. 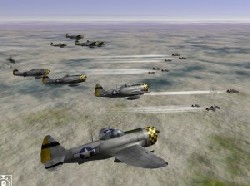 
The settings for increased fighter activity by themselves would make it MUCH harder to get to target and back home.

However, I've decreased the learning curve slightly so that crew gain experience a bit faster. . .about 20% faster. However, gunners don't detect incoming bandits quite as omnisciently (the range/width of detection independent of current orientation was huge), and their initial lead error can be 20 feet at 1000 yards instead of the default of ten feet. Ive also made it possible to kill pilots with a bullet that enters the cockpit from the front (default was 0 now .05). In the default setting of the DB file it was not possible.

At the same time, crew initiative is higher across the board when someone is injured. This means that on the bombers you dont occupy, which is ALL except one after all, crew will get medical attention more readily and die less often. This means more gunners working, and fewer bombers going out of control and fewer fires raging unchecked. This means more surviving bombers to take on the extra interceptors and put the iron on target.

However, a bad wound will bleed out in 6 hours instead of 8. I thought eight hours was rather long. 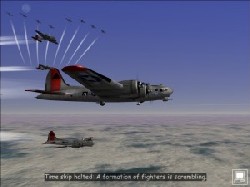 Glad those little friends are around!


The game allows the bullet effects to be more powerful for the player as gunner in the Fort than for the AI. The default is a factor of 5x! I have reduced player bias to a factor of 2x. Sorry, youll have to work a BIT harder to get your kills.

Ive increased wind gusts slightly as well as maximum allowable wind speed. This may increase the challenge for your navigator in some circumstances. (You will also notice your B-17 moving in the wind when parked if wind is high). Ive reduced average cloud cover over the primary target area by 10%.

Be sure to back up your current DB file just in case.

I have experimented with two versions of the DB file. If you use version 1.2, I highly recommend turning air collisions OFF in the game configuration, otherwise the extra bandits will gradually take out most of your squadron. I wish I could have left this setting alone, but collisions are far too common.

If you use version 2.0 I have adjusted air collisions to about 50% of their previous level. I recommend you leave collisions on and give this file a try first.

I recommend doubling your AMMO. It will be just your 12 Forts against all interceptors. Think of it as if your crew were allowed to pack extra ammo on board since the other squadrons are not flying today.

I recommend experimenting with using the graphics cache if you have more than 128MB and higher than PIII 650. On my 1GHz Athlon (256MB) I get better results with no cache. Set terrain at BALANCED unless you have 256MB or more.

NOTE: Dogfights are now intense. Dont fire on the second in a line of incoming fighters unless you are sure it is hostile! Escorts will lock on the tail of bandits and follow them through the formation! 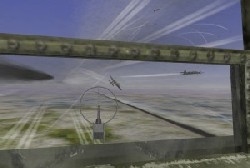 I think I need more AMMO


Fly the MiniMissionIf you are interested in editing the R&RDB file yourself, this information will allow you to edit the file to access a MiniMission.

Search the db file for [MiniMission]. Here is what you will find.

In the minimissions you can select ANY airbase you want, not just those mentioned in the R&R. One player typed in Munich and there he was!

To fly proper FreeFlights, just change line 1 in the R&R's file to Free from Standard. Then select the airbase and the aircraft you want to fly in the lines below it.

Next, go into Historical Campaign and click on the left-hand (1st Bomb.Div) option. If you select Funsville as your airbase youll see some awesome terrain!

Cant wait to fly the Me-262? Start a new Squadron Commander campaign in December, 1944.

Want to see some dazzling dawn skies? Try the #6 Historical Mission to Hamburg.