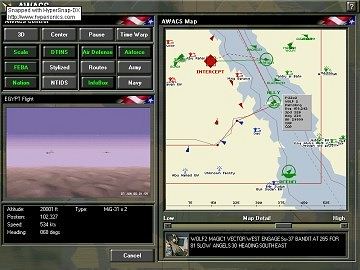 Csim: Will it be possible to lose my AWACS in TAW? What happens to the virtual Commander when I do?

SPK: "Yes you could lose the AWACS. Each country can only afford a finite number of such a valuable and expensive aircraft. You can bet that just as you place great emphasis on killing the enemies AWACS, they in turn will be looking for your AWACS...

If you were the AWACS commander when it is killed then you are no longer at that point of presence, and if it was the only AWACS you had in theatre, then all your points of presence have lost their Strategic view."

Csim: Tell us about resource management. Just how critical has this become as a tactical element?

SPK: "The resource you are interested in depends on which point of presence you are occupying when you consider the question. If you are looking at the entire war, then you will be concerned with aircraft losses only in their total effect on the war, but when you are the pilot the resources of concern will be any mission that you protect, your wingmen, and yourself. When you are a dead pilot, that becomes a very critical tactical matter!"

Csim: How do resource management and the ground war relate? Can the enemy take out my supply convoy and so limit my ability to fight? Do I have the same opportunity?

SPK: "As stated earlier, all elements in the campaign have some bearing on all others. The leverage that each element can exert to effect the greater war has been decided by the F-22 team."

Csim: How much will the virtual Commander have to concern himself with the ground war in F22?

SPK: "The virtual Commander is concerned with the Total Air War, as the product name suggests. Part of that idea does concern the ground war, but it is largely directed at the air element in the same way that general Chuck Horner was given the JFACC role during the Gulf War."

Csim: So far I've restricted the theory questions to the NATO side. What about the war from the other side? Under what doctrine will the enemy operate, or is it important for me to know?

SPK: "It is very important for you to work out what war policy the enemy is following. The only way that you will find is to observe their overall behavior surmising their aims from the information presented to you. The enemy will be fighting the war for their own reasons as previously stated."

Csim: Will we see any graphical enhancements to TAW compared to ADF?

SPK: "Yes there will certainly be some graphical enhancement. This will mainly be to fix things that we see as a problem, but may also involve enhancement for the Campaign."

Csim: What feature of TAW excites you the most?

SPK: "Actually I do not see any one feature that really does it for me, what I see is a collection of features that work together with great synergy. As the Producer I get to see the potential for this sim while in production; the nuts and bolts that everyone within DID produces, getting welded together to produce a Ferrari! I see a product that will have appeal to many people who have an interest in military aviation, F-22 Total Air War has been considered from the top down, and right through the middle."

Csim: What is the multi-player goal for TAW? How many people will be able to participate in a game on the internet? What about LAN?

SPK: "We can write our products so that they will support large numbers of users online occasionally. The sim player wants reliability in a part of the game that is inherently complex and this means we must compromise on the numbers we can support for an acceptable level of reliability. In F-22 Total Air War the figure we are willing to compromise to is eight players."

Csim: What will be the upgrade path for owners of ADF? Will TAW be available as an upgrade for a small cost?

SPK: "After considerable consideration of all the marketing and technical problems, DID with its publisher, Infogrammes, has decided to release F-22 Total Air war as a complete product. In a very real sense the totality which Total Air War opens to the participant is infinitely greater than that offered in ADF. In addition the box will contain high quality materials to match Allies & Adversaries, but this time around the focus is upon strategy.

Csim: Recently there was an announcement regarding force feedback for TAW. Are you considering any other new abilities for TAW, like dual monitor support for the AWACS interface? The virtual battlefield seems the wave of the future and new hardware like Voodoo 2 is suddenly opening new possibilities. Can you tell us anything about the next TFX from DID?

SPK: "You will no doubt have heard of the Skunk Works? Well their security is nothing compared to the workings of DIDs R&D division. Strange Alien hardware, (and software) is allegedly sighted from time to time, I have to say that I have SEEN nothing!"

Csim: Can you tell us anything about TANK? Will we see TANK this year? Is TANK the first module in a virtual battlefield?

SPK: "SIMNET and the total battlefield are of interest to DID, both for military and sim use. TANK as it is currently known ( a working title) is part of that vision. It is the first DID product to make use of new game engine technology which will appear in future products. For the exact nature of this game engine and capabilities, I refer you to the last answer. A publishing date for Tank will be disclosed in due course - when DID feels the time is right."

Csim: Thanks Simon, and best wishes to all the team at DID!

SPK: "Thank you for this opportunity to speak to those who often have strong opinions on our products. Whatever your viewpoint, or anyone elses for that matter, the content of our sims is the result of a great team made up of very hard working and talented people, who while passionately pursuing their work, have to make careful decisions, and compromises.

DIDs products are the result of many peoples efforts. It starts with the drive and vision of our Chairman: Martin Kenwright, and extends to include many influences from outside the company. Once combined with our unique approach, the results, we hope, are a kind of magic

To read the F22 reviews go to:

To read the F22 TAW Preview go to: