PC News Naval Campaigns 1: Jutland Announced
HPS Simulations is proud to announce the upcoming release of "Naval Campaigns 1: Jutland." In the spring of 1916, the greatest naval battle of World War I occurred near Jutland. The German High Seas Fleet emerged to give battle to the British Fleet in a dramatic battle of missed opportunities and misunderstood commands, and exploding battlecruisers.

This first installment of the Naval Campaigns series features a REALTIME game engine that allows the player to play against the computer or against another player (or players) online. Jutland is a tactical battle simulation which models individual ships and capabilities.

Naval Campaigns 1: Jutland is scheduled for release on 4 October 2002.

New Screens: Black Hawk Down
We have new screens from the latest Delta Force incarnation, Black Hawk Down. Set in Somalia in 1993, Delta Force - Black Hawk Down is based upon and around the Operation Restore Hope and Task Force Ranger campaigns and follows members of the elite Delta Force and US Army Rangers as they participate in a number of daring raids against the oppressive Somali warlords in and around Mogadishu.

Under the terms of the contract, Electric Boat will begin detail design and related support work to convert the first four Ohio-class ballistic-missile submarines (also known as Tridents) to an SSGN configuration. The submarines to be converted, coincident with their mid-life refuelings, are USS Ohio (SSBN-726), USS Michigan (SSBN-727), USS Florida (SSBN-728) and USS Georgia (SSBN-729). Electric Boat designed and built all 18 ships of the Ohio class.

Considered a prime example of military transformation initiatives, SSGNs will carry up to 154 Tomahawk missiles and 102 Special Operations troops. SSGNs also will serve as platforms to develop and test new weapons systems, sensors and operational concepts that could further transform naval warfare, including large unmanned undersea vehicles and off-board sensors.

In addition to the design work, Electric Boat will procure long-lead time material and assemble manufacturing kits for delivery to the Puget Sound Naval Shipyard in Washington, the conversion yard for USS Ohio, the lead SSGN. USS Ohio is expected to rejoin the operational fleet as an SSGN in 2007.

It was the first time that British military aircraft have exercised with the air force of this former Warsaw Pact country, and saw the Jaguars flying with Bulgarian MiG fighters and Sukhoi attack aircraft. 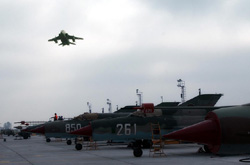 Jaguar flies over a line of MiGs.

"The chance to operate over what is a former Warsaw Pact country is unique and ground-breaking for the squadron, and the opportunity to operate with former Soviet Union aircraft is unprecedented in many respects," said Wing Commander Mike Seares, Officer Commanding 6 Squadron.

Much of the equipment to support the Jaguars went overland on an eight day drive across Europe and was all in place when the aircraft flew into Graf Ignatievo air base, near Plovdiv in central Bulgaria on 19 August.

The Jaguars flew missions each day with their Bulgarian hosts, dropping practise bombs on a nearby range and familiarising the Bulgarian pilots with NATO procedures and tactics.

Bulgaria is one of a number of countries previously allied to the Soviet Union who are actively seeking membership of an expanded NATO, and eventually membership of the European Union.

MiG-21 pilot, Second Lieutenant Lubomir Slavov, was enthusiastic: "For the Bulgarian Air Force it is a big opportunity to see how the RAF and NATO countries fly, and how they use their tactics. I think we have achieved the main objectives, and I think the achievements are greater than the expectations".

In between exercise tasks most of the Coltishall contingent, staying in historic Plovdiv, managed some site seeing, from amphitheatres in the mountains to a visit to the Black Sea coast. Comemting on the friendly nature of the hosts, Wing Commander Seares said: "Everybody has been tremendously friendly towards all of us. They are extremely courteous, very polite, and very keen to show us their country".

The new UK-designed weapon, named ASRAAM (Advanced Short Range Air-to-Air Missile), chases down targets using a highly advanced homing head. It can "see" an image of the hostile aircraft it is about to destroy.

Lord Bach said: "This missile is the best of its kind in the world. It can go further and faster than the weapon it replaces - the Sidewinder - and its advanced homing head and in-flight agility mean it will be almost impossible to evade." 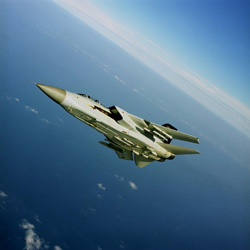 "Officials from the Defence Procurement Agency and the contractor, MBDA UK, have worked together constructively to speedily and successfully overcome earlier problems with the missile. This is an excellent example of Smart Acquisition in action, and I congratulate all concerned. ASRAAM is yet further proof that British defence equipment is of the highest quality."

Air Cdre Andy Sweetman, the MOD's Director of Equipment Capability who has been responsible for bringing ASRAAM into service, said: "I believe this is the best air-to-air missile in the world. It will give the RAF a combat-winning edge and our aircrews the confidence that they can prevail against any potential adversary."

The RAF has successfully completed a demanding series of trials with ASRAAM and the weapon is now ready to be deployed on operations. It is a fast, highly agile, fire-and-forget missile for short-range air-to-air combat. It is highly capable even when faced with sophisticated infrared countermeasures. It will be carried by Tornado F3, replacing Sidewinder AIM-9L, and will also be fitted to the Typhoon when the aircraft becomes available for operational deployment later this decade.