According to Zombie Studios Head, Mark Long, Delta Force: Task Force Dagger will be based entirely on the current multinational military campaign in Afghanistan. What's in a name, you ask? "Task Force Dagger" is the name of the US military's 103rd Military Intelligence Battalion and the name of the field headquarters for all Special Operations missions in Afghanistan. Full Story

Each issue includes tips, behind-the-scenes features, how-to articles, and fun activities that challenge pilots. The Flight Simulator team also draws upon the expertise of key aviation partners such as Jeppesen, AOPA, Rod Machado, King Schools, and Patty Wagstaff. These professionals bring authoritative, practical information to Flight Simulator pilots who want to expand their knowledge of the real world of aviation and apply new skills to virtual flying. As the official site for software development kits (SDKs) and related information for add-on developers, Flight Simulator Insider also helps those who expand the Flight Simulator experience for their fellow virtual aviators.

Codemasters has implemented a replacement system for those who purchased the flawed disk. Customers should access the technical support portion of the Codemasters website for details or contact customer service in the U.S. at [email protected] The support team will make CD-key verifications before sending out a replacement disk. Click here for further details.

New Look ECTS Revealed
CMP Europe Ltd. unveiled a new-style ECTS today. The move, which will see a range of brilliant new features, incentives and facilities being added to the show, has come in response to valuable industry feedback generated through independent research.

In a radical and exciting change to the shows format, consumers will be invited to attend ECTS this year, the first time in its 14-year history. The move will ensure that exhibitors who want to target consumers as well as trade are given the maximum return on their exhibition budgets.

Andy Lane, event director, said: "Weve always said that ECTS is a trade-only event, because thats what the industry wanted. But now its clear to us that part of the industry is ready to bring the consumer into ECTS. The technology at ExCeL enables us to have consumer halls sitting alongside trade-only halls easily and efficiently. ECTS will now benefit from the buzz of a consumer event whilst still retaining its core values as Europes premier trade event for the interactive community."

Military News Photo of the Day 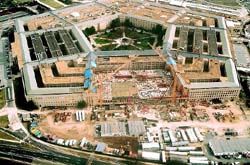 Reconstruction of the Pentagon continues nearly around-the-clock as construction crews pour cement for floors and walls to replace those damaged in the Sept. 11, 2001, terrorist attack on the building. (DoD photo by Grant Greenwalt)

Northrop Grumman Awarded Multiship Contract
Northrop Grumman Corporation announced today that its Newport News sector has been awarded a multi-year, multiship contract by the U.S. Navy for nonpropulsion work on Nimitz-class aircraft carriers in San Diego through 2007. The contract is valued at approximately $150 million.

The first authorized task involves planning for the upcoming Planned Incremental Availability on the USS John C. Stennis (CVN 74) at the North Island Naval Air Station in the fall of 2002. This contract is a follow-on to a previous contract for maintenance and modernization of Stennis in San Diego. 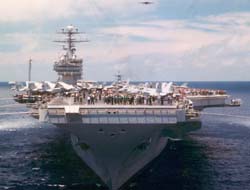 The Stennis and the USS Nimitz (CVN 68) are currently home-ported in San Diego and the Navy has announced that the Ronald Reagan (CVN 76), currently under construction at Northrop Grumman Newport News, will also be based in San Diego after delivery.

"We have been an effective partner to Puget Sound Naval Shipyard, which accomplishes all CVN propulsion work in San Diego, and we look forward to continuing to work with our team of local San Diego contractors," said Ben Robison, director, In-Service Carrier Programs for Northrop Grumman Newport News.

The win also represents a key component in Boeing's vision of the integrated battlespace of the future, where networked information and communications systems provide a competitive edge to soldiers in the field and commanders in the control room.

The FCS agreement, subject to negotiations, has an expected value of $154 million, which represents a portion of the program, which is estimated at $4 billion over the next five years. The Defense Advanced Research Projects Agency (DARPA), working with the Army, is the contracting agency. 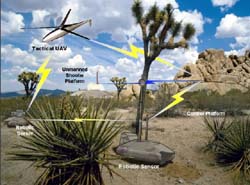 "FCS represents a new, accelerated approach to acquiring systems-of-systems capabilities," said Jim Albaugh, president and CEO of Boeing Space and Communications. "The customer said it wasn't looking for a traditional prime contractor, but rather a partner. We took an 'honest broker' approach that as the LSI, we would look across all of industry, not just our team, to find the best solution for each part of the program."

FCS is a networked system of improved communications links and lighter, more mobile armored vehicles that is, in effect, the backbone of the Army's long-term transition plan to reach what it calls the 'objective force." FCS will serve as the core building block to develop what the Army calls "overmatching" combat power, sustainability, agility and versatility necessary for full-spectrum military operations.

This next-generation objective force will be lighter and more mobile; the Army transformation requirements include the ability to put a combat-capable brigade anywhere in the world within 96 hours, a full division in 120 hours, and five divisions on the ground within 30 days.

HMS Fearless To Be Retired After Nearly Four Decades Of Service
After nearly 37 years of distinguished service with the Royal Navy on a wide range of tasks around the world, the assault ship HMS Fearless will finally be withdrawn from service when she returns home on 18 March from active operations in the Arabian Sea.

A Landing Platform Dock, Fearless has played a high profile role in numerous deployments, ranging from landing amphibious assault troops to retake the Falklands in 1982, to hosting diplomatic negotiations over the future of Rhodesia in 1968.Most recently, she moved straight from the UK's joint exercise with the Omani Armed Forces, Saif Sareea II, in September/October 2001, to active operations in the Coalition against terrorism following the atrocities of 11 September.

It had been planned that she would be retired in November 2002, as her replacement, HMS Albion prepares to enter service in January 2003.However, following her long deployment in the Arabian Sea, and given her age, the necessary maintenance work which she would need for another eight months service has been deemed not to be cost-effective.The helicopter carrier HMS Ocean has taken over her duties in the Arabian Sea.

HMS Albion will commence sea trials later this year, before entering service in January 2003. HMS Albion and her sister ship HMS Bulwark, which on current plans will enter service towards the end of 2003, will be significantly more capable than HMS Fearless and HMS Intrepid.

The new vessels will be equipped with vastly more sophisticated command, control and communication systems. They will be able to deploy embarked troops much more quickly - by air and sea - and will use landing craft with 20% more landing capability. They also have a RORO type configuration for rapid embarkation of vehicles.

Plans for the disposal of HMS FEARLESS are currently under review.

Command Sgt. Maj. Frank Grippe of the 10th Mountain Division told Pentagon reporters of dark-clothed Al Qaeda troops on snowy ridges and in mountainside caves firing down on U.S. troops shortly after they'd arrived at Shahi Khot, in eastern Afghanistan. He and other soldiers described their Operation Anaconda experiences via phone link from Bagram, Afghanistan. AFRTS Radio Report: U S troops fight with conviction in Afghanistan

Two helicopters flew Grippe and his troops into the southern part of the valley to block Al Qaeda forces early March 2, he noted. Other troops, including 101st Airborne Division soldiers, were flown in to block the north valley, he said, while allied Afghan troops were to sweep through local villages to rout any Al Qaeda forces.

However, Grippe noted, Al Qaeda troops had used heavy automatic weapons and mortar fire to immobilize the allied Afghan forces before they began their sweeping movements.

He said the Americans also came under intense small arms, mortar and rocket-propelled grenade fire from Al Qaeda troops dug in above. Later in the day, Grippe was wounded in the thigh by shrapnel from enemy mortar fire.

Within a minute after disembarking from the choppers, the American soldiers "started getting a barrage of RPG rounds," recalled Sgt. 1st Class Robert Healy, another 10th Mountain soldier who fought in the south valley with Grippe.

"From that point on, whenever they'd show themselves, we'd take care of them," Healy explained, adding that he and his troops continued to experience a barrage of mortar, RPG and small arms fire from enemy troops. Mortar shrapnel wounded Healy, too.

Al Qaeda mortar fire that day caused 12 U.S. casualties, Healy said. The Americans wore body armor that protects the torso, "so nobody sustained bad injuries around their chest or stomach," he noted. Most of wounds were to the legs and arms, he added.

The events of Sept. 11 "motivated a lot of guys," during the battle, Healy said, adding that injured soldiers want to return to the fight.

Grippe noted that he and his battle-weary soldiers were flown out of the area after fighting all day with a determined enemy.

"The Afghan forces never arrived. This was a total American force in the Shahi Khot Valley that day," Grippe said.

Operation Anaconda continues and U.S. forces number around 1,000. They are joined by a like number of Afghan fighters and about 200 special operations troops from Australia, Canada, Denmark, Germany, France and Norway. Army Maj. Gen. Franklin Hagenbeck of the 10th Mountain commands.