Armies of Armageddon (AoA) is a turn-based squad-level tactical combat game and construction set developed by Boku Strategy Games and published by Shrapnel Games. Out of the box, the game is set in the year 7000, but in fact this can be modified by the user to anything from prehistoric times to the most distant future, and everything in between. The simply amazing flexibility of the game system is certainly the most remarkable thing about AoA and will give anyone with an imagination and some free time unprecedented bang for the gaming buck.

Installation was a breeze. You can play the game without the CD in the drive, which is a plus. Your basic options in the main menu are to play a campaign, a single scenario, or a PBEM game with a human opponent. 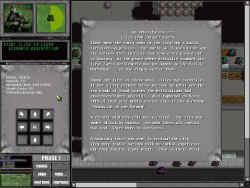 The manual was really good, and printed too, which seems to be going out of fashion among the web-based game publishers. It pretty much explained everything you would ever want to know about the game system and the Customizer. All the formulas involved with moving, spotting and shooting units were explained in detail. I am a more seat-of-the-pants player but I know some people will appreciate Boku making all the guts of the system readily available.

You receive a short briefing before each mission, outlining the goals and setting the scene. There are turn limits on many of the scenarios to prevent stalemates and create a sense of urgency. Nominally, the game has a sci-fi setting. Giant CityCorps are warring for a limited number of planets. In the campaign, you are a member of the Bellville CityCorp, which has come back to resettle Earth, which is a wasteland. The natives, called "grunts," do not fancy this idea, and there's your pretext for war.