Combat takes place on an overhead map that can be as large as 80x80 squares. Your army consists of men, which take up one square, and vehicles and "Comstruks" (mechanized walkers), which can take up four or nine squares. The opposing sides alternate turns. Each turn is divided into three phases: movement, fire plotting and fire resolution. Also, at the very start of the turn there is a morale check. If your troops see a bunch of their comrades vaporized they'll become shaken and panic, inhibiting their combat effectiveness. Watching the same happen to the enemy helps morale, naturally. 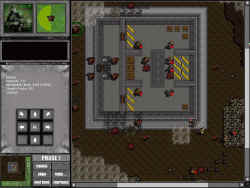 Movement: Each unit has a set number of movement points. Vehicle movement is slightly more complex since they accelerate and decelerate, being forced to make wider turns when they are moving quickly. Units can "charge," doubling their movement, but they are not allowed to fire if they do. They can go into a defensive stance, making them more stealthy and harder to hit, but that reduces their movement points. If they do not move at all, they can go into "overwatch" mode during the fire plotting phase. This allows them to perform opportunity fire on enemies during the opponent's movement phase. Enemy units set on overwatch can also fire at you during this phase if you stumble into their line of sight. The emphasis is on using real-world fire and movement tactics, and invariably these techniques are more successful than charging headlong toward the enemy. I found that sometimes the turn limit would force me to move more quickly than I would like, incurring some unfortunate losses. 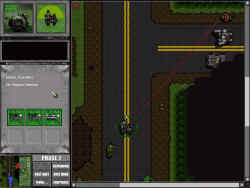 Fire Plotting: In this phase you assign targets for the units that have spotted enemies, or set them to overwatch mode. This is done on a weapon-by-weapon basis so it is possible for a vehicle or Comstruk that has multiple weapons to target separate enemies. This comes in handy on many occasions. 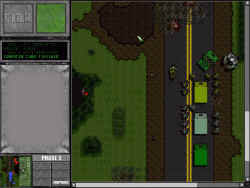 Fig. 4. Ambushed by the grunts

Fire Resolution: Finally, you get to see all the mayhem you've plotted. You can fire all your units, or fire each unit separately for those times that is useful. For example, if you were firing a machine gun and a smoke grenade at an enemy you would want to fire the smoke last, because it would obscure the line of sight of the MG man if fired first.

You repeat the turns until the goal is achieved or you reach the turn limit. The goals can be forcing the enemy to retreat (a side can only suffer a certain percentage of casualties before retreating, varying by the scenario), occupying the requisite number of objective squares, or picking up an item or items. Your army, if it is used from scenario to scenario, gains in experience and abilities as it goes through combat and wins battle honors. You have to win a mission to progress to the next one in the campaign, but the manual tells you how to skip missions you can't complete. 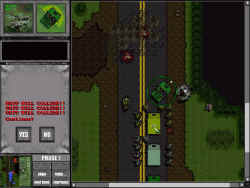 That's pretty much all there is to the game system itself. It is simple and robust; the game did not crash once while I played it, and the simplicity (and Boku's good work) has made the AI quite challenging. It will wax you (as it did me) if you are impatient and bumble around. The interface is intuitive. I started out playing with the mouse but this can get clunky. As the manual suggests, the game is much easier to play using the keyboard shortcuts, which are easy to learn.

When I started playing, I must confess I was a little skeptical. The graphics are simple, the animations few, the sound effects pretty spartan. Differing levels of height aren't really represented either; nor is the usual aimed shot/snap shot/burst fire option available (though if you do not move you get a firing accuracy bonus). To veterans of X-COM and Jagged Alliance 2, this game may leave you unimpressed. It doesn't have X-COM's tense night battles and cool tech tree; nor does it have JA2's bantering characters, or both games' sense of a grand strategy and resource management. 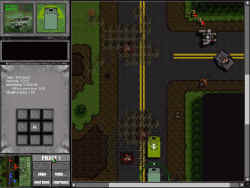 Fig. 6. Smoke on the battlefield

But in spite of not having these things, there was something that kept me coming back to AoA-and it wasn't just the fact that I had promised to review it! The game is fun to play in a more abstract way, something more akin to chess than the RPG-ish games mentioned above. And it represents vehicles, which neither of those games do (well, I guess both did in a manner of speaking but it was kind of cheesy how they did it). The vehicles, which can transport troops around the battlefield and add heavy fire support for the infantry, add a very interesting dimension to the game. The scenarios are varied and do not all involve exterminating the enemy. Sometimes you simply want to survive and escape a battlefield. And you can invest the characters with personality by using the mission briefings to create a story. Finally, it does have multiplayer capability, which I did not test, but which can only be good. My overall impression of the game was good. I had fun playing it, and what more can a gamer ask for?