The traditional hex map actually is helpful here in that it shows that the units of the time were rather more cumbersome to deploy than their counterparts of today. Game play is a bit stilted because it is broken down into many sub-turns as one leader or the other gets initiative - it is more like a turn based miniatures game, which is, of course, what it most resembles. Each turn is broken into a series of impulses, a bombardment phase in which artillery is targeted, then a command phase in which each leader is allocated command points. Each leader is then activated in turn and is capable of issuing orders to units within a certain distance of him. (This distance simulates how well he could shout orders and/or send aides to various subordinates with commands.) In addition, each leader can rally subordinate unit if they are lacking in morale and fleeing the field. 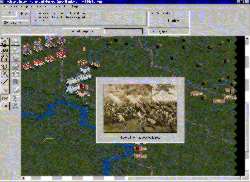 After the player selects a unit, he can order it to turn or move, change formation, recover from disruption, or charge or assault. If the units are adjacent to each other, the player can order his units to fire by clicking on a shooter and on a target. This is where the game becomes cumbersome. While I find the activation of leaders to command certain units representative of war in the 18th century, the resolution of combat unit by unit is not a good display of how things happen. All combat should be resolved simultaneously even in the 18th century, many units conducted activities at the same time. There is no reason why a computer game, unlike a board or miniatures game, should not support this as a feature. This mistaken implementation prolongs the game and inhibits pleasure. 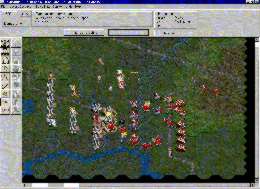 The AI is challenging and quite soundly defeated me in my initial scenarios - it is a good challenge for the average gamer and never quite displayed the same look twice. After playing a few games with the initial release, I downloaded the patch and this resulted in much improved play, in particular, the route selection algorithms are better which means your units move better, especially taking advantage of any roads. A possible bug in one scenario was I could never get artillery units across a stream/marsh hex even though the units were on a road. 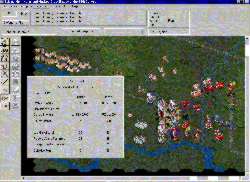 Fig. 5. Halfway through, things don't look good for the Brits

Additionally, the text box where combat results are displayed is not placed in a location where it is easily read and since it is the same gray color as the rest of the interface, it is not particularly easy to read. Giving the various text boxes a white background would have made life easier for the color and bifocally challenged among us. 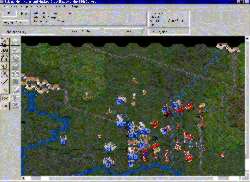 Fig. 6. As shown by their poor Morale ratings