BCT is the brainchild of Patrick Proctor, a U.S. Army Field Artillery Captain. Dissatisfied with the lack of realism he saw in commercial wargames, and unhappy with the difficulty of playing the U.S. Armys JANUS wargame, he set out to combine the best of both. BCT was the result.

BCT is one of the two best hardcore wargames on the market (the other being TacOps). BCT runs in real time, but you can pause at any point and can give orders while paused, providing simultaneous execution of orders and fires without requiring the player to move the mouse about like a crazed weasel. You can group units, draw out paths with waypoints, then copy the path as a formation move to any selected group, so large units can easily move in concert. BCT also uses real-world elevation data, displayed to the player as a topographic map. Combat results are based on the kill percentages used in the U.S. Armys National Training Center, and you wont find a better simulation of artillery outside the military. In many respects, BCT is a civilian version of JANUS. 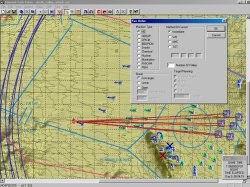 
So far, so good  realistic terrain, lethality values from the professionals, pauseable real time, and the best artillery simulation around. However, BCT also had problems.

First off, BCT was ugly. A patch helped this, by changing the map from black and white to a color combination less hard on the eyes, but it was never designed to look especially good.

Second, BCTs interface is clunky. It does work, and it got a lot of improvement over time as Pat Proctor acted on user suggestions (and I gather its a vast improvement over JANUS!)  but the interface learning curve is terribly steep: it took me around 6 hours to learn to control my units with any effectiveness. This is compounded by the third problem  the need for micromanagement. You need to tell all your troops where to go and when to do it; they have no brainpower of their own for this. You need to coordinate all the artillery fires, and you need to make sure units line up to get through the minefield breach. While there are a few things the units do for themselves, such as firing on spotted targets and adjusting their courses slightly to go through those minefield breaches, theres a lot of work for you to do, and its all in the clunky interface.

Taken together, these three problems mean that scenarios can be a lot of work to play in BCT. BCT can be very rewarding to play, but it is no way a game for the casual gamer.

ATF should solve some of the problems of BCT. The feature Im looking forward to most is the improvement of the friendly AI: ATF is intended to have formation-level logic, so that a player can issue general orders to a platoon or company, and have the computer figure out how to handle the details. This should cut down on a lot of the micromanagement, and thus cut down greatly on the amount of work the player has to suffer through to execute plans. This AI improvement is also expected to help the computer run the enemy force. In addition, ATF is expected to have more types of terrain, better terrain resolution, weather effects, neutral units, and friendly units not under the players command.

However, none of those new features are actually in the ATF ATR. The only new feature in ATF ATR is the graphics. These are, indeed, improved. 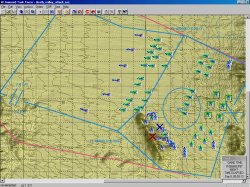 A battalion on the move - the shading looks good at this zoom level.


The map has been made much clearer by adding a shading layer (an optional graphics layer that puts shading into the spaces between the contour lines, making it easier to pick out the dips and folds in the ground.) This works very well at the wider zoom levels, but tends to break down at the closer zoom levels because the shading layers graphic does not scale along with the map, and thus breaks up into sizeable color blocks which destroys the shading effect. 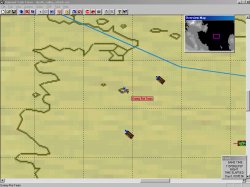 Zoomed in part-way to examine a firefight.


Units can now be displayed either as NATO symbols, or as small icons. The turrets of the icons move separately from the hull (for vehicles with turrets). The graphics for fires, barrages, and unit status have all been improved and are much more visible than before. 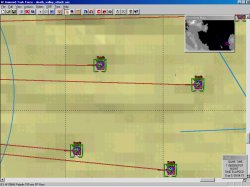 M109A6 Paladins in action - and the shading has broken up into blocks.


ATF ATR is stable on most machines, but, for reasons that are not clear, crashes fairly frequently on my machine. This appears to be related to memory use in some obscure fashion, but Pat Proctor has not yet been able to figure out the cause of the problem. Given his excellent track record for tech support with BCT, I have no doubt he will get to the bottom of this problem eventually. It has, however, cut down on the number of screenshots I was able to take. (You can see more screenshots at the official ATF site.)

The ATF Alpha Technology Release is, in the end, not likely to be of much interest to any but die-hard BCT fans. The improved graphics are a plus, but people willing to put up with the interface and the complexities of realistically-simulated modern warfare are not likely to be terribly picky about graphics. If the finished version of ATF eventually includes the full promised feature set (and there is no reason to doubt it will), it should have a much broader appeal. I, for one, am looking forward to it! Unfortunately, the most exciting features all still in the future, and are not present in the Alpha Technology Release demo.