Politicians work from fund to fund but mercenaries' work is never done. Thus, after liberating the country of Arulco in Jagged Alliance 2 (JA2), heroes for hire are called upon once again to defend it from a threat from neighboring Tracona in Jagged Alliance 2: Unfinished Business (JA2UB). Having switched publisher in mid-series, Sirtech had to develop a stand-alone sequel instead of a mere add-on for its combination turn-based/real-time strategy RPG game and must satisfy veteran JA2 fans as well as attract new players.

Veterans will feel right at home with game play but will notice some streamlining. The plot revolves around a raid to take out a missile base. No longer do commandos have to maintain rear area security and train militia; they just go in, do bad and get out. Simplicity is further shown by not having to renegotiate mercenaries' contracts or go through those silly sixteen psychological questions. One lump sum secures the mercenary for the duration complete with equipment. If youve become attached to your lovable team of psychopaths from the old game, an import utility is provided for a happy reunion. 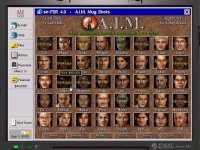 These mercenaries are the stock-in-trade of A.I.M.


The new product, however, does have new features. Not only does Tracona have twenty-plus new sectors but new guns and characters are included. The new characters are available from a new, low-end competitor of A.I.M, M.E.R.C. Snowy mountainous terrain does a job on characters' health without a shot being fired. New function keys show mercenaries' line of sight and the range of their weapons. An unusual feature shows what cover is good or bad for a mercenary relative to the position of the cursor; no more must a player wonder why that bullet hit.

The most evident and meaningful change is in the AI. This enemy is smart! Enemies no longer oblige by attacking piecemeal in the open, standing up. They will second guess an enveloping move and cluster around an exit point. They use fire and movement tactics to great advantage. The day of the easily mopped-up sector is over. In fact, sectors may become even harder. A map builder utility, not in the preview copy, will allow players to create their own cunning, twisted traps. For true gunslingers, the "Iron Man" mode prevents saving games during combat. Such features may be enough for the already indoctrinated gamer. 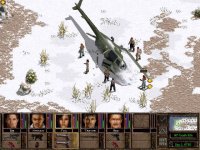 The team looks around the crash site for supplies.


The Comfy Combat BootNewcomers to the Jagged Alliance series should be told of one of the most innovative systems around. This series balances role playing with strategy, economics with combat, and adventure with planning. The player begins by creating an alter ego choosing from fourteen special skills and balancing ten abilities from a finite number of points. Having created yourself, you can use $37,000 to recruit five more mercs from over 40 different mercs. Each candidate has his or her own specialties, ratings in ten attributes, personal history, and traits and distinct preferences about who they work with.

With your group gathered, your group helicopters into enemy territory. Here, the nuts and bolts of play come into practice. Characters begin movement in real time and can be moved singly or in groups. Glowing items on the ground can be picked up if useful. Sounds can signal possible enemies. Characters can speak to civilians, get hints or items or even recruit them to the group. Sectors should be searched carefully. Important items can be hidden in drawers and closets. Locks can be picked or jimmied if you have a crowbar. If worst comes to worst, a swift kick sometimes works. On the other hand, if the location is booby-trapped....

Early on, though, players should toggle on to the map screen. Here, a map of all sectors can be shown and characters can be assigned to separate squads or be given duties like practicing skills they are weak in or training other mercs in their strengths. Two additional assignments are vital but can be overlooked. Wounds are bandaged after combat but this does not facilitate real healing. Mercs with medical skills can be assigned to patients. They then bring the patient's health back up to 100%, improving lowered skills and giving another meaning to "playing doctor." Rest is the other important assignment. Your group walks and fights a lot. Fatigue sets in and can only be countered with sleep. Bed most people down every 24 hours and compress time but keep somebody on watch; the AI doesn't rest. Movement from sector to sector is possible on the map sector. Squads can take varying paths and enter sectors from different directions. Coordinated attacks can then be accomplished. For players in a rush, an auto-resolve feature can handle combat when mercs immediately see enemies upon entering a sector. Be that as it may, real players always go back to tactical mode when a firefight is brewing. 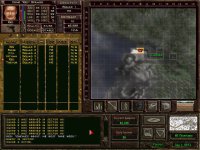 The mao screen displays mercs' attributes, inventory and controls as well as position.


Sighting opponents instantly kicks in the turn-based mode. As usual, the activities a character can engage in is governed by action points. Changing to one of the three stances (standing, crouching, and prone), requires action points as well as walking, running, moving in a crouch or crawling. A sighted enemy brings up a target cursor showing the number of action points needed to fire. Adding more action points increases accuracy. Fire combat takes into account range and penetration as well as accuracy of shooters. More than one slug is needed to kill a bad guy and even the wounded will shoot at short range. Running out of ammo can be embarrassing so players should become familiar with weapons. When gunfire doesn't do the trick, shift a grenade into the merc's main hand and toss; always good for a laugh and usually good for a kill or two. Sometimes, situations call for upfront and personal. Stealth mode allows mercs to get close enough to use a knife, a crowbar, or a karate chop. 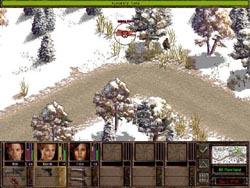 Buns draws a bead on a bad guy.


Pretty but Filling?JA2:UB could have been difficult to play, given the multitude of actions. However, Sirtech provides easy interfaces and intuitive hot keys. Left and right clicks bring up screens and menus that allow easy access to information and controls. Although 2D, the graphics are state-of-the-art and are as attractive as they are functional. The sound effects are  for once  crucial to play, not merely an annoyance.

The new game has many of the strengths of the original. Yet, the use of the mercenary groups in a mere raid raises questions of depth. The original game was absorbing on strategic and tactical levels. Can the new game provide the same experience on only a raid? Time will tell.