Blame it on E3. That's what I'm gonna do when my wife finds out that I just dropped US$350 on a video card. All in the name of domestic harmony- it's those damn nVIDIA guys that made me do it. If it weren't for them producing THE badass video chip- the GeForce 2 GTS, I wouldn't be in this situation. 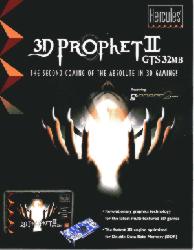 Their willing accomplices in the gaming industry didn't help matters, what with just about every demo running showing the blatant propaganda "Powered by nVIDIA GeForce2 GTS" on the monitors. Besides, the nVIDIA people fed us lunch and showed us a frontal-lobe smoking demo that made me NEED one. Maybe there was something spiked in the cold cuts, some compound that dissolves free will: No. It was the card.

Damn them. Damn them for making such pretty pictures. And damn Guillemot for making the Hercules 3D Prophet II GTS 32MB available so soon down at my friendly neighborhood CompUSeless-A store. There really ought to be a waiting period for these things, like there is for handguns.

OK, this isn't the Oprah Winfrey Show or Sally Jesse What's-her-face, so I need to do the proper thing and hold myself accountable. Here's my story, sad but true

About four months ago, I got tired of looking at Flanker 2.0 through my 16bit Voodoo3 3000 AGP card. I wanted something that could push 32 bit, but I didn't want to dog my processor down for the sake of such eye candy. Besides, 3dfx's Glide was looking to be a dead format as far as 3D acceleration goes. So, in the interest of being a good consumer, did my homework and researching as to what card would be the best bet for what I wanted. It looked like the then-new GeForce DDR-DVI cards were the hot ticket- and they were. They were hot. And expensive. So I backed down a bit.

In the brave new world of video acceleration, however, four months ago is positively pre-Cambrian, or at least Bob Hope-ian. It's going to get worse, too. The nVIDIA rep said that video cards are going to be coming out at a rate of a new generation every 6 months. So events overtook my plans on getting a GeForce card, and my lust was temperedup until E3, when I saw Flanker running on a GeForce2 GTS. It was freaking gorgeous.

That was it. Man, I thought, is that the same terrain engine I see on my Voodoo equipped Falcon Northwest PIII 500 back home? Yes, it was. I needed one. Argument over.