Article Date: May 04, 2001
Article Type: Preview
Version: "Release" (This is the version of the sim we used in this preview. Rage called it the "Release" version. We assume this means the same thing as Gold Master).

In Part II we looked at weapons and targeting, damage models and mission flow. This time well look at some combat engagements and the campaign structure.

Before we begin, lets revisit briefly some of the issues Ive raised in Parts 1 and 2.

While the manual tells us that an optimal weapons load will be selected by the mission planner, it doesnt always work that way. This is a real problem for gameflow. 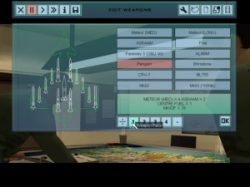 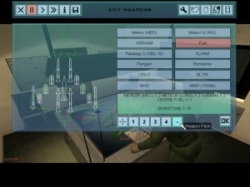 
As I finished a second strike mission against incoming hovercraft, I left the pilot to fly home and jumped into a third mission of the same type. I found my aircraft armed with dumb bombs for moving targets! I exited the mission without saving and took it up again at my previous save. This time when the pilot icon bar popped up for the planning phase of the third strike mission, I went to the arming screen and chose a Brimstone loadout.

Obviously, the player has the option to arm every mission flown by his six pilots if he so chooses, and its great to have the option. HAVING to do so, however, is a real interruption in game flow. 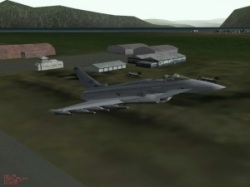 Not long after a series of Hovercraft strike missions, (twelve to fourteen missions in total) the Russians invade Iceland (my home and native land, no less!). After flying a hovercraft mission I noticed a sea target 40 nm to the east so I hauled my collective strike force in that direction.

As I closed to within 25nm I discovered a number of supply ships and four warships! We had a few Brimstone missiles left so I used my last few to take pot shots at the container ships. Three Brimstone hits caused some fires but didnt sink any ships. 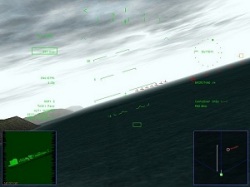 Coming in low to ships 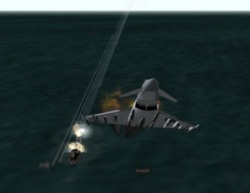 
This was an interesting test of detection systems, since a high approach resulted in air to air missiles coming from the cruisers. A second approach down low was much safer. Like Total Air War, EF Typhoon does model radar cross section (RCS). Anticipating bad news with the proximity of the naval force, I transferred a pilot from a base near that location to a base to the west.


Pilot transfer can be done no matter what you are doing, whether on base or in the air. I paused the game and then brought up the icon bar (Figure 1). (Note that you cannot issue a transfer to a pilot who is currently in a plane or in a briefing.)

The transfer is done by clicking on the image of the pilot you want to transfer, and then clicking on a new base location. This works ok, though I could wish for a full screen map with more tactical information.

The invasion was dutifully reported by EBC news. On my next flight from a northeastern air base I found mobile AAA launchers taking pot shots at me. The tactical map, accessed via the top icon bar, shows that I have lost an airbase. 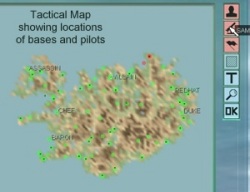 
This CAP mission suddenly got quite hot, as you can see from some of the images following. 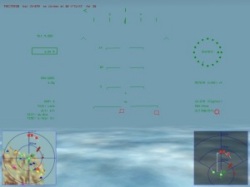 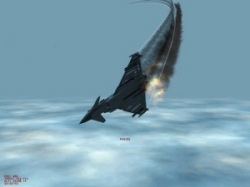 
Just before this air-to-air engagement, I was notified that one of my pilots was briefing for a hovercraft strike. The pilot bar pops on screen and a planning icon tells you which pilot is now in mission planning.


Noting the proximity of a naval force that was knocking down NATO aircraft, I brought up the Pilot Control bar and selected Duke and then paused the game. Its a good idea to pause the game while arming aircraft, otherwise you may find that the planning session abruptly ends and you havent finished arming the aircraft! Pausing also allows you to jump back into the original mission at the same point you left, though you must un-pause the game before selecting your original pilot. This time I exchanged two Meteor missiles for a pair of PENGUIN missiles. Following is the sequence of steps necessary to arm a flight in the planning stage.

Click on the Plan icon to bring up the session. 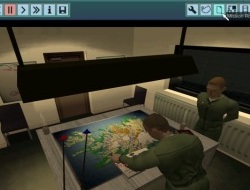 
And here is an image from the mission I flew against the enemy ships. 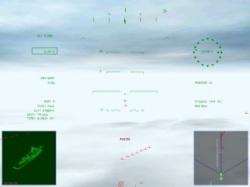 While returning to base I was notified that an intel update was available. I paused the game to bring up the Game Control Bar and clicked on the War Report icon.

Instead of the usual EBC news update, this time I had an actual War Report listing. 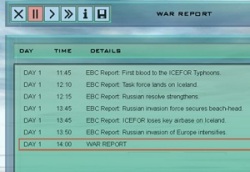 
The War Report had three pages of information. The first page shows a strategic map divided into different zones. As you can see, one of the zones has gone to the enemy. The right side of the screen details a strategic summary, in this case showing that ICEFOR is holding ground while the enemy is retreating.


The second page shows actual resources in Iceland for each side. The third page shows an Internet Europe Today update on the war. The War Report is nicely done, providing some good information as well as providing atmosphere. So far my campaign is going nicely and I havent lost any pilots.