B-17 Flying Fortress: The Mighty 8th
Redefines Air Combat Simulations As We Know Them
by Joe "Impaler" Highman

Very rarely in our industry does a sequel title develop a fervent and rabid following in the years leading up to its release. Even more rarely does this title singularly redefine an entire genre of software. However, those special titles often do much to earn the applause of game players everywhere while earning the praise and confidence of those fans that supported and promoted it while in development. 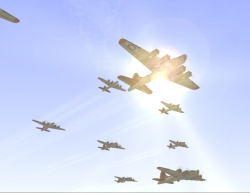 If God be for us, who could stand against us?


B-17 Flying Fortress: The Mighty 8th is just such a title. Released in the UK in late November and then in the US in mid-December, this title is the follow up to the 1992 release of the same name. While classically classified as a flight simulator, one could argue that the title would be better defined as a personnel management simulator. Unlike other aviation titles, the player must learn and master the jobs of ten independent airmen to be successful. The player also must concern himself with keeping these men healthy and productive, including monitoring each crewmans morale. Throw a handful of devastatingly accurate anti-aircraft fire and a pinch of aggressive veteran enemy fighters firing 20-millimeter cannon shells into your virtual craft, and B-17 II, as it has come to be known, becomes quite a tasty stew of combat-simulation-goodness.

Whats in the purty box, huh, mister?Please note that for the purposes of this particular review, that we are reviewing the UK release, and not the US version. The developer has assured us that the only difference between the two versions is the artwork and the release date.

The CD contains the installation program and is required for game play. The CD also contains DirectX 7.0, although many players have reported better luck with the newly released DirectX 8.0 drivers.

The game manual contains the traditional quicksteps guide to get the new pilot into the air right way. For the more patient student of the simulation, the manual also contains a complete training school section that describes each crew position in detail. The end of the manual contains reference material including a walk-through of a typical mission. While this manual is nicely done, owners of the original 1992 release of B17 Flying Fortress will feel that something is missing. The reference section, while excellent, is less informative in general and less specific than its earlier counterpart. The schools offer a detailed overview but could have done more to prepare the player with a more focused emphasis on procedure and authenticity.

The box also contains a foldout two-sided color chart with photos of the various fighter cockpits available on one side, and a complete layout of the B17 Instrument panel on the other. Each photo is labeled and identified for quick reference. I recommend highly that the new pilot keep this reference chart handy for the first few missions. Knowing where to quickly find the fuel shutoff switches when one has a burning engine can come in handy! One should also keep the chart handy because if one does forget a keystroke and has not programmed it into a voice command recognition system, like Microsofts Game Voice, there is no easy way to escape out to the configuration menu to look it up.

Sadly, although not unexpectedly, the box did not contain a foldout map of the target area. Even the manual did not contain a map of the region affected, although the entire map is viewable from the Navigators instrument panel. If you plan to do the bulk of the navigating manually, as many simulation enthusiasts may, then I recommend the purchase of a map that shows much of the roadways of France, Germany, and parts of southern England and northern Czechoslovakia.