After forces are placed, it is helpful to create maneuver graphics for the Blue force. These can be as complicated or simple as the author desires. Standard drawing tools allow the rapid generation of controlling graphics. Here the author has a choice, does he want to set up the player to execute a specific course of action? If so, then very general graphics are called for. If not, then more specific graphics are required.

Perhaps the most difficult element of scenario construction is the enemy COA development. In order to do this, the author must decide how many different ones he wishes to control, and then individually place the vehicles to support them. After placing the vehicles, they must be assigned movement paths. Unfortunately, this is a very tedious process, made slightly easier by being able to group units together and paste unit commands and the use of SOPs to bypass impassable terrain. Finally, the player must time the units as they move down the battlefield (A built in function allows the player to decide when to stop or start a unit moving on the battlefield. This is the only function which works in the construction set - unlike Harpoon II, you have to switch between applications in order to see how the scenario plays out.) Once the course of action is developed, then make the enemy situation template in order to allow the player to surmise what the enemy is going to do. Once a single course or action is developed, the player can generate another. (Figure 6) 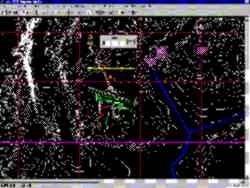 This is perhaps the biggest surprise of the game. The AI is actually very simple, it will call for artillery fire and engage in direct fire as well as apply any SOP items enabled, but the larger issue of an AI that selects a plan is not there. The game engine chooses one of any of associated courses of action when starting the scenario and it moves along those lines regardless of the friendly player actions. As such, the player is really fighting the scenario author who does not have the ability to react. Harpoon was slightly superior because you could assign different starting positions, branching movement paths, and assign orders to units at waypoints. However, you can expect to see some of these features in future Prosim releases.