Fresh from the front is Shrapnel's and Prosim's Brigade Combat Team(BCT) scenario editor. This editor gives you the power to edit and create weapons, vehicles, and units to modify existing or make new scenarios.

Scenario creation is actually, as any who have done it, a fairly complicated process. You must first decide on a locality for the game, the forces, and then determine victory conditions. Fortunately, the Construction set provides a wizard that helps you through loading the basic components of the scenario: map and units, and it also provides a progress chart so that you can check on the progress of the scenario development. 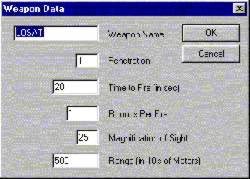 Included maps, in addition to what are already included in other BCT releases, are Afghanistan, Hawaii, Fort Polk, Fort Sill, Iraq, the Sinai, and Utah. The scenario wizard leads the author through choosing Maps, Friendly and Enemy Units, the Operations Order, Maneuver Graphics, and the Enemy SITTEMP. Once these elements are loaded or created, the player can add additional objects such as fighting positions and obstacles. 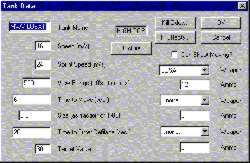 One of the problems with BCT is the widely divergent range of values for weapons and their effects. The author can develop new weapons with ease and assign them to vehicles. Also in the vehicles dialog box, the player has access to the Pk values for weapons against the new vehicle. What is difficult here is that the player must note which weapons have effects against existing or new weapons and ensure that they are accounted for; otherwise, the new weapon will not engage any targets.

The final step in creating units is to assign vehicles to them and then place them onto the map. This step is repeated as necessary until the entire order of battle is built or modified. A unit can consist of any number of vehicles from 1 to around 8 or 10. Larger numbers are usually reserved for field artillery.