So, you've been hearing about this Forgotten Battles WWII combat simulation for some time now. But the Eastern Front was not your idea of fun; or, perhaps, you weren't smitten by either side? Well, fear no more. The addition of various Western Allied aircraft has been going on slowly, and not just the Lend/Lease types either.


The P-47 Thunderbolt and P-51 Mustang have been added along with maps that the USAAF battled over in this very well supported simulation.

But how to get these into a linked series of adventures and keep the immersion alive? With a bit of knowledge of the campaign structure and a lot of time getting to know the full mission builder you can tweak together some fine, historic scenarios.

Or you could do it the easy way like I have done: Grab yourself a copy of the well received title from Just Flight known as Battle Over Europe.

As this is an add-on, there is very little to worry about. If you can run Forgotten Battles, you can run Battle over Europe. The only additional requirement is 240 MB of hard drive space if you haven't already installed FB Patch 1.22. If not, it comes with the FB Patch 1.22 so no worries.

As it was laying down the additional info to my hard drive, I leafed through the surprisingly large manual titled "Pilot's Notes". It is 52 pageshalf in English and half in German.

It is very descriptive of the options available and how to access them, and even has tweaks and hints for running things in Forgotten Battles.

Of course, it also explains all the features you'll experience in this add-on: Dynamic campaigns, single missions, and even an on-line campaign capability (NGen). All of these items are for the two USAAF flyables included in FB Patch 1.22; namely, the P-47D and P-51D, and the map areas of the Western front. There are also opposing missions and campaigns for the Luftwaffe on these Western front maps versus the USAAF fighters and Bombers.

So, we're now familiar with what's in store, and the install was quick and painless, let's get to it.

This is a good place to take a first peek as you will see new entries under the US and German sides. Since German missions have been available since the original IL-2 Sturmovik, I will concentrate my ramblings on the area I'm personally interested in, the USAAF over Normandy, the Ardennes, and Berlin, amongst others. There are surprisingly few of these single missionsthree to be exact. It's surprising, as the new and improved DGen and its scripts generate some really nice missions. Punting the two around for the USAAF was a nice warm-up, but let's get to the meat of this add-on, shall we?

As previously mentioned, there are two flavors of these: off- and on-line. Both types are prefaced with the abbreviation (BoE), to differentiate from the originals. But even the originals are enhanced by way of the newer version of DGen. It was compiled by the creator of the one included in IL-2: Forgotten Battles. These BoE prefaced campaign choices include these late war options:

All these new areas, with names Yanks like me are familiar with! Not that learning all these new names and places was a bad thing, but sometimes it's nice to slip on a comfortable old shoe, even if it's re-shined, spiffy and new.


I tried out the fighter-bomber aspect first, which I had previously done in Forgotten Battles under the Red Star of the Soviets. This time it was over the Ardennes in the Battle of the Bulge. Thirty-eight missions of great variety with authentic paint schemes from the time and place also included with BoE. Some were escort, others were sweeps, and a lot of my favoritemud-moving.

Prowls behind enemy lines looking for supply convoys, the infamous train-busting missions, even precision strikes of a WW2 fashion on HQ's and marshalling areas. There are even instances where Allied intel goes horribly wrong and a pacified area is suddenly swarming with the enemy in the air, on the ground, or both. I will shamelessly admit to having hit the "Refly" button (usually after letting out a "Whoa?!")

There are also a lot of the little things that just make the overall feel of the simulation so much better. If you take over an area that has airbases within it, all are not miraculously staffed up resplendant with AAA protection. Rather, they all re-build to force levels in a gradual, more natural manner. Also the added trucks, jeeps, and the like, are given paths to trundle along in an around the area where take-off operations are proceeding. This added vehicle movement lends to better immersion than a static line of aircraft cranking engines.

When you fly a mission correctly, a nicely detailed briefing is displayed and a running total of enemy scrap you've produced is displayed. It is broken down by air kills and the different types of ground vehicles and structures you've destroyed. A definite improvement over previous debriefs.


Gameplay-wise, it is a very good upgrade. But there are a couple of little, niggly problems. The Ardennes maps have most of their airfields at the edges. Take-off patterns were often off the viewable map. Not this add-on's fault, but a problem with the map and the game's capability to have take-off and landing in the same direction. It's still playable, but disconcerting.

Also, there is the addition of US Medals for battlefield heroics, yet when they are displayed they are mis-marked.


Again, no biggie, and I believe I found the cure. There are two different Medals of Honor in the US directory, and the properties file only lists six medals, while there are a total of seven medal graphics. Again, a small thing, considering the overall fun to be had.

The new on-line capable campaign is a lot more tweakable than the dedicated off-line one. The same maps are available, as they are included in FB, and can be played like a continuing co-op. You can even play them totally off-line with AI filling in. Host them and you can have historical or "Host's Choice" missions created. Options for the Host's Choice include options for the type of strike, escort and patrol aircraft for both sides. The number of flights in a day. Mission sizes, end times, and other parameters may be changed at the start of the campaign generation.

I have generated a couple of missions with NGen, and they look good. It, like any of these campaign missions, can be played again later as all missions are kept in their respective folders. They make excellent bases for the Full Mission Builder by tweaking, along with their respective briefings. When played on-line or off, it treats the results the same and has a very cool listing of the number of air kills by all human participants sorted by ranking.

The things I have already reviewed that are offered for sale by JustFlight are mostly of good value. Anyone that has studied the Internet in search of files and add-ons for Forgotten Battles may realize that there are other campaign generators and scads of historical skin files. But combining these on a single volume can be a time saver for those that don't want to spend the time searching. It is also a time saver as you don't have to figure the way to get it to generate what you want, just install and it's ready to rock. The $30 price is the same as the official add-on, Aces Expansion Pack, which also has NGen capability. More on that in a later article.


As an interim before the Aces Expansion Pack, it's quite good, and I have been told by the publishers that the new aircraft such as the P-38 will be included in an upgrade. Already offered is a set of night skins for some of the aircraft to give low vis capability to the twilight flights. It is free to owners of this add-on. If you like flying the West European theatre of operations, this is a must have add-on as it is very well done. 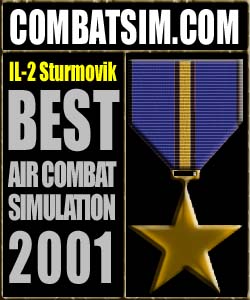