The multiplayer demo is using graphic technology provided by the next generation UnrealTM engine and will feature two maps including a new version of the original Rainbow Six city street large multiplayer map, 15 weapons, many weapons gadgets and two multiplayer modes survival and team survival

The final game will feature 15 new single-player missions that include the discovery of a cache of biological weapons and stopping an armed gang from terrorizing a London bank. Final release is scheduled for February 2003.

This test satisfies one of several Pentagon-mandated milestones that must be achieved prior to the U.S. Air Force awarding the F/A-22 Raptor industry team the Lot 3 production contract. 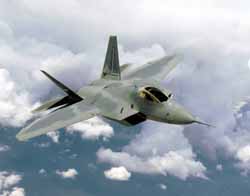 "This test marked the first time a Raptor, flying at supersonic speeds, has been used to detect, track and launch a radar-guided missile against a subscale aerial target also traveling faster than the speed of sound," said Lockheed Martin's F/A-22 Avionics Systems Manager Tony Keith. "This test effectively and successfully demonstrated the 'first-look, first-shoot, first- kill' capability of the F/A-22's advanced integrated avionics."

During the November 5, test mission U.S. Air Force Maj. James Dutton launched and guided an unarmed, radar-guided, medium-range AIM-120 AMRAAM missile to the target while piloting his aircraft -- Raptor 07, the seventh flight test aircraft built -- at 1.5 Mach (1.5 times the speed of sound, or approximately 900 mph) at 35,000 feet above the Pacific Missile Test Range off the coast of southern California.

This test was especially challenging for the Raptor as the target was flying at an altitude of 50,000 feet - 15,000 feet above the F/A-22 -- and approaching the fighter from directly in front.

Post-flight analysis showed the AMRAAM passed close enough to the AQM-37 unmanned drone -- which had been modified to emulate the radar cross-section of a small conventional fighter aircraft -- that had the missile been armed with its standard proximity-fuze warhead, the AIM-120 would have detonated and destroyed the target. The AMRAAM missile carried no warhead, but was equipped with a telemetry package and GPS-based time/space-positioning instrumentation to help determine missile accuracy.

"This 'nose-to-nose, 12 o'clock-high look-up' shot would be extremely difficult for today's fighters because of the small size and extremely quick closure rates of the target drone and intercept aircraft," Keith added. "But the F/A-22's avionics acquired the target at a distance sufficient to allow the pilot ample time to make a successful intercept." Raptor 07 is one of seven developmental flight test aircraft currently operating from the Air Force Flight Test Center at Edwards AFB, Calif. To date, the flight test team has accumulated more than 2,500 flight test hours during more than 1160 test missions.

In a related development, Raptor 4006 -- also assigned to Edwards AFB -- has successfully flown for the first time equipped with avionics software block 3.1.1 FT-1, a software upgrade that increases the F/A-22's avionics capability and stability. Flight tests involving this software upgrade mark an important milestone on the road to supporting the timely start of Dedicated Operational Test and Evaluation (DIOT&E), currently planned for next summer.

Osprey Reaches 100-Flight Hour Mark
The V-22 Integrated Test Team recently surpassed 100 hours flown since the programs return to flight in late May of this year. The milestone was reached by Osprey No. 10 on a three-hour test flight crewed by Maj. Shawn Healy, Maj. Paul Ryan and Staff Sgt. Michael Snyder.

"Its a great feeling, said Healy. "All test points were met on our flight, which is representative of how things have gone lately. Weve done a lot to get the program where it is.

"The Marines, Air Force, Dyncorp and Rolls-Royce have all come together to make things happen," he said. "Like all test programs, weve had some unplanned problems, but the way were configured allows us to solve them quickly."

While justifiably proud of reaching the 100-hour milestone, the V-22 program isnt about to lose its intensity. In the coming months, the ITT will be executing the high rate of descent test plan, as well as accepting their fifth aircraft from the Bell-Boeing plant in Amarillo, Texas.

"Passing the 100-hour mark is a big step toward proving the V-22 is a safe aircraft," Madenwald said, "but its just one step. Were not going to let up until the Osprey is supporting the fleet, and even then well still be around to help it realize its full potential. The V-22 is an amazing airplane."