New Screens: Black Hawk Down
We have new screens from the latest Delta Force incarnation, Black Hawk Down. Set in Somalia in 1993, Delta Force - Black Hawk Down is based upon and around the Operation Restore Hope and Task Force Ranger campaigns and follows members of the elite Delta Force and US Army Rangers as they participate in a number of daring raids against the oppressive Somali warlords in and around Mogadishu.

H&D2 Site Shutting Down
After 2 years and no new updates in the last nine months, the unofficial Hidden & Dangerous 2 website has announced they are shutting down on November 11, 2002. According the website's announcement, "Our repeated attempts to get news from Take2 is a total waste of time, we even did a Q&A that Take2 agreed would be a good idea, well six months have passed and they have not returned it, despite our emails. It is this total lack of co-operation from Take2 that just puts the final nail in the coffin. It is not cheap to run this site and it also takes up a large chunk of our lives, two years is long enough to be throwing money at something that seems to have no end."

Military News Last H-1 Leaves the Nest
The last of the H-1 upgrade program test aircraft took its first leap out of the nest here Oct. 4 when it flew a 1.5-hour shakedown flight. Flown by Marine Corps Maj. Steve Girard and Bell Helicopter test pilot Gregg Shimp, both members of the H-1 Integrated Test Team AH-1Z, known as Z2, will begin flying temperature and cooling data points once the shakedown flights are complete.

"We flew the aircraft up to 100 knots and it performed extremely well, which is a tribute to the entire crew working on the aircraft," Girard said. 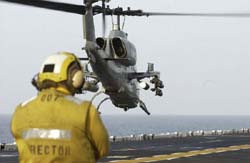 With Z2 having now flown, all five production representative aircraft are actively flying test flights in support of the upgrade program. Z2s first flight followed that of Z3 because Z2 has more extensive instrumentation that required more assembly time to install.

While most of the test flights have been flown by mixed crews (Bell and Marine Corps test pilots) from the H-1 Integrated Test Team here, Z2 is slated to fly within an envelope established by Z1, according to Girard. Thus, an all Marine Corps crew will typically be at Z2s controls.

Over the 30-year expected lifespan of the aircraft, this commonality is projected to save the Marine Corps approximately $3 billion in operating and support costs. 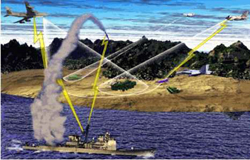 On Sept. 30, two JDAM weapons simultaneously targeted the second and third vehicles within a five-vehicle convoy on the U.S. Navy's desert test range. Both weapons landed well within their effective circular error of probability. The JDAMs, consisting of a production tail kit slightly modified to add a Raytheon UHF anti-jam data link coupled to an inert Mk-84 (2000-pound) bomb, were launched at 20,000 feet from an F-14D. The weapons were in flight for less than a minute as they traveled approximately six miles to the target.

Later in the day, a JSOW, launched from an F/A-18D flying at 30,000 feet and approximately 35 miles from the target, scored a direct hit on a remotely controlled M-60 battle tank as it maneuvered on the high desert test range. The weapon was in flight for more than five minutes.

For both tests, an E-8C Joint Surveillance Target Attack Radar System (Joint STARS) provided the precision, real-time target location and velocity data using bi-laterated ground moving target indicator (GMTI) data from its radar and a fourth-generation AESA F-35 prototype radar in a Global Hawk Multi-Platform Radar Technology Insertion Program role and flown aboard a Northrop Grumman Electronic Systems BAC 1-11 test bed aircraft. A Link-16 Weapon Data Terminal relayed the real-time targeting data to the JSOW and a UHF anti-jam link was used for the JDAM. The engagements were successfully completed while the targeting platforms remained well outside the range of most surface-based air defenses and were unaffected by weather conditions in the target area.

AMSTE is in the second year of a three-year DARPA developmental effort. This JSOW launch was the final weapon launch for year two. Five weapons have been tested during the two years of the program and all have either directly impacted the target or hit well within DARPA's stated requirements. Additional AMSTE tests are scheduled for later this year.