OpFlash Resistance Patch Details
The Operation Flashpoint: Resistance patch (1.85) will be out soon, it is currently in the final developement stages. The patch will contain over 100 new features, improvements and bug fixes, including improved compatibility with 1985 and Red Hammer campaigns or slider custom dialog functions. Click here for futher details.

New Screens: LOMAC
We have these new screens from Ubi Soft's work-in-progress development shots of Lock On: Modern Air Combat. This week we have a close up of the F-15C radar in operation and its armaments display. 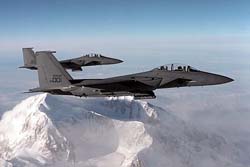 The IFF transponders allow the military to rapidly identify its own friendly aircraft from enemy or potentially hostile aircraft.

Advanced Systems General Manager Pat McMahon said the award "is significant because it provides the Republic of Korea's Air Force with a highly reliable and easily upgradable system that is vital to its air defence operations." She added that the award also furthers the relationship between Boeing and BAE SYSTEMS on the F-15 programme; the Advanced Systems units has also fielded its legacy AN/APX-76 Interrogator for the Air Force's F-15 Eagle, and recently delivered other AN/APX-113 CIT systems for the Electronically Scanned Antenna-equipped F-15Cs based at Elmendorf Air Force Base, Alaska.

Advanced Systems' family of Combined Interrogator Transponders includes the AN/APX-111 now operational on F/A-18 C/D/E/F aircraft, and the AN/APX-113 which is used primarily on U.S. and allied F-16s. Both the AN/APX-111 and 113 are "third-generation" systems, enabling the user to upgrade to new IFF capabilities such as Mode 5 using plug-in modules and updated software loads. This important feature potentially allows aircraft operators to upgrade their IFF systems on site instead of returning the units to the factory for modification.

Co-sponsored by the Army's Precision Fires Rocket and Missile Systems and Unmanned Aerial Vehicle Systems Project Office, the drops were performed at Fort Huachuca, Ariz. They pave the way for an October test series at White Sands Missile Range, N.M., that will demonstrate engagement of large moving targets by Bats released from a Hunter. 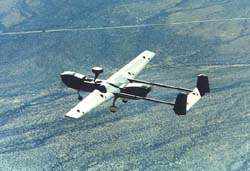 Collectively, these initial rounds of tests represent the first of two planned demonstration phases. Phase 1 is intended to demonstrate operational capability of the baseline Bat from Hunter. This version of Bat, currently in production at Northrop Grumman's Land Combat Systems facility in Huntsville, is an autonomous munition that uses a combination of passive acoustic and IR sensors to seek, identify and destroy moving armored targets deep in enemy territory.

During Phase 2, a global positioning system will be integrated with the Pre-Planned Product Improvement (P3I) Bat, which will then undergo qualification testing for deployment from the Hunter. The P3I Bat, a planned block upgrade, adds advanced millimeter-wave radar and improved imaging IR sensors, providing a co-boresighted, dual-mode RF/IR seeker that works with the baseline acoustic sensors.

"The LCPK programme, which is a major science and technology missile development effort, is an excellent example of government laboratory and industry teaming to mature key technologies in support of a critical Army requirement, said Bill Nourse, LCPK Advanced Technology Development (ATD) programme manager at the Army's Missile Research and Development Engineering Center.

"I am very pleased with BAE SYSTEMS flight test," said Carol Frazier, U.S. Army programme manager for Aviation Rockets and Missiles. "The guidance seeker acquired the laser spot and hit within one meter of the target centre at 5,500 meters. This significant milestone, which was achieved on the first shot, demonstrated the ability to achieve precision accuracy with the Hydra 70 rocket system," she said.

During the rocket's flight, the CTV completed a series of pre-programmed flight manoeuvres, demonstrating real-time aerodynamic control by the autopilot and inertial sensor. The test vehicle was launched with a fully integrated guidance and control system and semi-active laser seeker to evaluate subsystem performance in flight.

The shot, which demonstrated the robustness of the BAE SYSTEMS design, followed extensive hardware in the loop (HWIL) testing at the Army's Missile Research and Development Engineering Center facility, Huntsville, Alabama.