PC News Fly with Oleg
Ubi Soft has announced that Oleg Maddox has kindly agreed to have sessions flying with the IL-2 Sturmovik community. The sessions are to occur on a regular basis and will be announced on the official IL-2 Sturmovik website. The first session is scheduled for tomorrow. Here are the details:

Strategic Command  European Theater Goes Gold
Battlefront.com and developer Fury Software have announced that Strategic Command  European Theater, a turn-based Grand Strategy wargame featuring the Second World War in Europe, has now officially gone gold. The game is already in production and is expected to ship by the end of the month. Pre-orders will be opened Friday, July 19th. Strategic Command will be available only from Battlefront.coms online store and is not being sold in retail. A Gold Demo will be released shortly.

Strategic Command offers 6 major campaigns- Fall Weiss, Fall Gelb, Barbarossa, Fall Blau, Zitadelle, Overlord which begin from 1939 to 1944. Each Campaign can be played beyond historical end of war date and into 1946. Game play is turn based with each turn lasting from 2 weeks to 1 month depending on the season. Designed for replayability and realism, options include fog of war, Free French forces, Partisans, scorched earth, thoroughly implemented features for sea transport, amphibious assaults, strategic bombing, industrial production, research and development, declarations of war, historical and random nation neutrality and allegiances as well as other political mechanisms. Click here to download the beta demo.

CH Products Update
CH Products has revealed what is currently on their drawing board for Christmas 2002.

Flight Sim Chair - CH Products and Dittrich Design, a contemporary furniture design company based out of Germany, have teamed up to offer this light-weight compact flight chair. Designed to use with your CH Flight Sim Yoke and Pedals, the Flight Sim Chair, is sleek enough that you'll want to have it ready for your urgent gaming fixes, yet constructed to fold up and slide underneath your bed. Pricing to be determined. Available by November 2002.

Throttle Quadrant - CH Products offers a realistic throttle quadrant with two different options, prop or jet, depending on your choice of flight. Designed for those of you who seek ultimate realism in flight simulation. Pricing to be determined. Available by Christmas 2002.

Uncommon Valor Out Of Stock
Matrix Games has announced that, "Due to heavy demand we´ve run out of stock of Uncommon Valor: Campaign for the South Pacific. The title is currently labled as "backorder" in our store. We´re expecting to be in stock again later this week. " Click here to find out why this title is so popular.

Military News Thrust Stand Will Improve Aircraft Flight Capabilities
A stand that will facilitate testing vectored thrust of aircraft and help improve flight performance capabilities is being assembled here. Managed by the 412th Test Wings project management directorate, the multiaxis thrust stand, or MATS, consists of three 80-foot towers, which are joined by a T-frame and set to measure vectored thrust aircraft.

The stand is key to thrust testing of future aircraft at the Air Force Flight Test Center, according to Carl Schudde, MATS project manager. Schudde said vectored thrust could be described as thrust that comes from multiple directions. On a regular jet aircraft, the thrust comes from one direction -- the rear. This means traditional aircraft could be tested on a less complex horizontal ground stand; however, Schudde added that aircraft like the Joint Strike Fighter uses vectored thrust and cannot be tested on these horizontal stands. 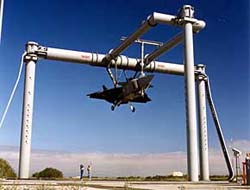 Because technology has changed the way aircraft are designed today, thrust characteristics have changed as well. The engines on newer aircraft like the JSF move, creating different angles of thrust to push an aircraft in different directions. Shudde said horizontal thrust stands cannot test the different angles of thrust because the aircraft is being pushed in more than one direction. Once the MATS is reassembled, testers can suspend an aircraft up to 50-feet high and connect sensors to measure thrust results from any angle.

Data taken from the stand, such as pressures and temperatures, will feed into a control room where it will be compiled and analyzed. After the data is analyzed, the information will be used to better understand the thrust characteristics of the aircraft. This in turn will help make this new, sometimes-unpredictable form of thrust more predictable to the pilot. Besides suspending an aircraft, the stand is adjustable as well. It can be raised and lowered to measure the thrust from short takeoff and vertical landing in aircraft like the JSF.

Prior to coming to Edwards, the MATS had been in operation for about five years at NASA's Ames Research Center at Moffett Field, Calif. Because of noise complaints the stand was shut down. The stand was then moved here to increase testing capabilities and because of Edwards AFB's more remote location.

"When an aircraft is on the stand, it makes a lot of noise," Schudde said. "Since Edwards is such an isolated location, testing can be done at any time with no complaint."

Gary Johnson, 412th Test Wing director of acquisitions projects, said the program is great for the expanding future of multiaxis thrust. Prior to using MATS, aircraft with multiaxis thrust could not be easily and effectively tested using existing ground test capabilities. Johnson said a stand like this one would likely save future projects money and time by collecting more accurate data.

The new capability here will also improve test pilot safety by offering a grasp of the thrust characteristics before flight. Half the stand has been reassembled. The initial instrumentation work should be done by the end of the year, with possible testing beginning as early as next year.

Navy Exercises Option for Third T-AKE Ship
National Steel and Shipbuilding Company (NASSCO), a wholly owned subsidiary of General Dynamics, announced today that the U.S. Navy has exercised an option to build a third ship for the T-AKE program, a new class of combat logistics force ships. NASSCO was awarded a $290 million contract for construction of the ship. 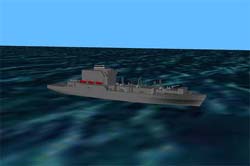 The T-AKE is a dry cargo/ammunition ship, designed to operate independently for extended periods at sea while providing underway replenishment services. These ships will provide logistic lift from sources of supply either in port or at sea and will transfer cargo - ammunition, food, fuel, repair parts, and expendable supplies and material - to station ships and other naval warfare forces at sea. The T-AKE will contribute to the Navy's ability to maintain its forward presence, replacing aging T-AE ammunition ships and T-AFS combat stores ships that are nearing the end of their service lives.

The T-AKEs will be 210 meters (689 feet) in length and 32.2 meters (105.6 feet) in beam, with a design draft of 9.12 meters (29.9 feet). The ships will carry almost 7,000 tons of dry cargo and ammunition and 23,500 barrels of marine diesel fuel. The ships will be operated by the Military Sealift Command and will be built to commercial standards, incorporating the latest in marine propulsion, ship safety, navigation, and environmental control systems. The T-AKEs will be the first modern Navy ships with an integrated electric-drive propulsion system, and have been designed to maximize cargo-handling efficiency and minimize the costs of operation and maintenance over their expected 40-year life.