Crimson Skies To Be Feature Film
The Hollywood Reporter announced yesterday that DreamWorks Pictures has acquired the rights to the PC game "Crimson Skies" from Microsoft to develop into a live-action feature film. The game is set around the economic depression in 1930s United States and centers on a group of sinister air pirates who threaten the sky and ground. The lead character in the game -- air adventurer Nathan Zachary -- attempts to save the day by warding off the bad guys. The game features 24 missions, including stealing government fighter planes and rescuing damsels in distress. DreamWorks executive Adam Goodman will oversee the project for the studio. No producers are yet attached to "Crimson," and DreamWorks is looking for a writer to adapt the project.

Comanche 4 Website Launched
NovaLogic today announced the launch of the official Comanche 4 website. The site includes the latest news, screenshots and wallpaper for the game. Comanche 4 is the fourth instalment of the Comanche series of games, based on the U.S. Army's next generation armed reconnaissance helicopter - the RAH-66, produced by Boeing-Sikorsky. Click here to check it out.

Jim's appearance in the game in the role of the communist General, was the idea of Operation Flashpoint's developers, Bohemia Interactive. The team thought Jim's likeness was the perfect match for the character when they had envisaged his appearance. Jim's inclusion in the game began an avalanche of Codemasters and Bohemia people all wanting to be a part of the genre-leading game. 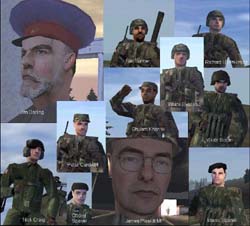 Players assume the role of an exiled Soviet turned NATO private who has returned to combat the forces that drove him out of his homeland. Players transition from ground battles to commandeering vehicles to piloting airborne gun ships, all the while moving up through the ranks within their unit. Released in Europe, North American Release Date: September 2001. Click here to take a look at our previous coverage.

New Distributor For CDV Games
CDV has announced that it will now publish its own games in North America and have Canada-based Softek International distribute them in that market. Two of CDV's previous games, Sudden Strike and Cossacks: European Wars, were published and distributed in North America by Strategy First. CDV has a number of games on the way, including the official expansion to Sudden Strike, Sudden Strike Forever.

F-16 crashes in Turkey
A second F-16 crash in as many days. An F-16 Fighting Falcon crashed July 18 near Batman, Turkey. The pilot, 1st Lt. Michael A. Nelson, Jr., of the 31st Fighter Wing, Aviano Air Base, Italy, ejected and is uninjured. He was picked up in a combined Turkish Jandarma/U.S. Air Force para-rescue effort and returned here. The aircraft, assigned to Operation Northern Watch, was en route to a mission enforcing the northern no-fly zone over Iraq. A board of qualified officers will investigate the accident. An F-16 =aircraft crashed at Edwards Air Force Base, Calif., July 17 killing two people. A board of officers will investigate the accident. 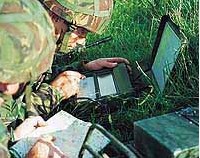 Announcing this at a press conference this morning Geoffrey Hoon, the UK's Defence Secretary said the deal would secure about 1600 jobs in the UK. CDC says it will build a new factory in South Wales for the programme.

Three companies were competing for the contract, after the MOD reopened the bidding when it sacked the Archer consortium that had originally been the preferred bidder last summer. They were CDC, Thales and TRW.

Thales will be particularly disappointed because it was hoping that this contract would establish it as the second British defence contractor after BAE SYSTEMS.

The new system is due to enter service in 2004, some nine years after the Clansman system was to have been phased out.

CDC said in a separate statement that the Bowman system had the potential to generate about two billion pounds ($2.8 billion) for Britain in export contracts over the next 10 years.

Boeing, Alenia Marconi Systems Team For JDAM
Boeing and Alenia Marconi Systems (AMS) have signed a teaming agreement for world-wide sales and marketing of the Joint Direct Attack Munition (JDAM) family of weapons and its derivatives. The teaming agreement also includes the Small Diameter Bomb programme, about to enter the competition phase in the US.

The new agreement will give the AMS Dynamics Division access to JDAM technology for the United Kingdom's Precision Guided Bomb programme and other potential markets. Boeing gains additional access to markets where AMS has strong representation, and to technologies available within AMS, such as the Diamond Back wing kit.

The Boeing Company is the prime contractor for the JDAM program. JDAM is a kit that converts unguided bombs into precision munitions. It has a proven record in test and combat. 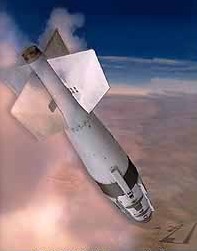 This is the latest teaming agreement between AMS and Boeing. AMS and Boeing are currently teamed on the Brimstone programme, for which AMS is prime contractor. Brimstone was selected by the UK Royal Air Force for fast jet operation in the anti-armour role. Boeing and AMS have also successfully demonstrated extended range for JDAM using the Diamond Back wing kit.

The JDAM guidance system is based on GPS and is all weather capable, unlike laser guided missiles which can be affected by poor weather conditions.

The RAF is expected to begin its tender competition for 'smart' bombs (the Precision Guided Bomb programme) later this year and Boeing is hopeful that this teaming with a European company will give it a advantage when the JDAM is offered, since it is already in service with the US Air Force. Over 28,000 JDAMs are on order by the US Government with more than 10,000 delivered.

Additional benefits will accrue for both companies with the formation of the new European missile company, MBDA, of which AMS will be a major component, later this year.

This agreement supports the US Department of Defense objective of ensuring interoperability among allied nations by providing a strong European industrial partner for JDAM and its derivatives.

Helios Prototype Soars Into Stratosphere
The sky is black 100,000 feet above ground, and the curvature of the Earth is clearly discernible. The air is so thin - only 1.4 percent of the density at sea level - it is incapable of supporting life. It is also incapable of supporting sustained horizontal flight of an aircraft - until now.

It is into that hostile environment 19 miles above ground that a small group of engineers from NASA's Dryden Flight Research Centre and AeroVironment, Inc., plan to fly the unique unmanned solar-powered Helios Prototype. The giant yet ultralight flying wing could soar into the stratosphere on its quest as early as the second week in August, after successfully completing an 18-hour functional checkout flight July 14 and 15. 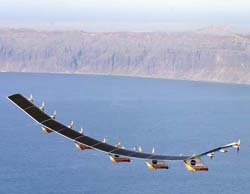 Should the Helios Prototype reach its objective, it would set a new world's altitude record for propeller-driven aircraft, surpassing the 80,201-foot record of its predecessor, the solar-electric Pathfinder-Plus, set in August, 1998. It would also exceed the highest reported altitude achieved in sustained horizontal flight by jet-powered aircraft as well, 85,068 feet by a SR-71 aircraft in July, 1976. Only short-duration rocket-powered aircraft have flown higher.

The Helios Prototype flights are being conducted from the US Navy's Pacific Missile Range Facility on the Hawaiian island of Kauai. The location at 22 degrees north latitude gives the Helios Prototype a sun angle advantage, and the protection of a vast test range and restricted airspace over the Pacific Ocean west of the islands.

The Helios Prototype is one of the unique remotely operated, uninhabited aerial vehicles (UAV) being developed for high-altitude, long-duration earth science imaging and atmospheric sampling missions under the Environmental Research Aircraft and Sensor Technology (ERAST) project at NASA Dryden, located at Edwards, Calif.

John Del Frate, project manager for solar-powered aircraft at NASA Dryden, noted that setting an altitude record is only one of several goals for this summer's flight tests.

"A 100,000-foot altitude record would be the icing on the cake," he said. "Our primary interest in testing this new aircraft is for taking sophisticated lightweight science instruments to greater heights.

"Another added bonus for NASA is the fact that flight at 100,000 feet would be very similar to flight in the Martian atmosphere," Del Frate added. "In a way, we are going to school on these flights to learn what the aerodynamics are like in these conditions."

AeroVironment vice-president Robert Curtin noted that production versions of the Helios could also serve as long-endurance commercial telecommunications relay platforms, orbiting over major population centres at 55,000 to 70,000 feet altitude for months at a time. Disaster recovery agencies might one day be able to move a Helios over the scene of a natural calamity where the normal communications infrastructure has been destroyed.

"AeroVironment's goal is to develop an airplane that is the equivalent of an 11-mile-high tower in the sky," he added.

The primary objective of Helios' recent checkout flight was to expand the flight envelope of the aircraft and verify proper operation of aircraft systems at a range of altitudes up to 76,271 feet. Reaching that altitude was considered necessary in order to reduce risk for the upcoming effort to achieve sustained horizontal flight at 100,000 feet (30,000 meters) altitude.

The 247-foot-span ultralight flying wing flew six low-altitude initial airworthiness validation flights on battery power at NASA Dryden in the autumn of 1999. Since then, the Helios Prototype has undergone major upgrades, including the installation of more than 65,000 high-efficiency solar cells across the wing which can produce more than 35 kW of electricity.

The 100,000-foot altitude flight is one of two major flight milestones set for the craft by NASA, the other being a four-day non-stop long-endurance demonstration flight above 50,000 feet planned for 2003.

Development of a regenerative hydrogen-oxygen energy storage system which would make the multi-day continuous flight possible is progressing at AeroVironment. The system will use excess power generated by the solar arrays during the daytime to run an electrolyzer that separates water into its component parts, hydrogen and oxygen, which are then stored in pressurised tanks. At night, the hydrogen and oxygen are recombined by the fuel cells, producing electricity as a by-product to power Helios.