ATI Announces Smartshader
ATI has unveiled another piece of the graphics technology slated for the next-generation Radeon card, which is expected to ship late this year. Smartshader is ATI's name for the upcoming card's vertex and pixel shaders, which will match all of the GeForce3's special effects and make some enhancements. ATI worked with Microsoft to add support for Smartshader to the upcoming revision of DirectX to version 8.1.

Smartshader supports the ability to apply up to six textures in a single rendering pass using pixel shaders. This results in better rendering performance by reducing memory bandwidth constraints on the graphics processor. The end result is the ability to produce more complex effects and more accurate models of organic materials and surfaces like skin, hair, wood, water and more.

Smartshader also supports the use of vertex shaders, which can modify the shape and position of 3D objects -- useful for character animation, objects that bend and ripple, and particle effects. What does this mean for developers? ATI told MacCentral that Smartshader technology will aid them by reducing the time it takes to bring new graphics effects to end users.

Smartshader complements Truform, another new graphics technology introduced by ATI this past May. Truform promises to add detail to 3D graphics by recalculating polygonal objects with much more detailed meshes -- doing so on the graphics chip itself so as not to impact the computer's processing capabilities. ATI plans to incorporate the technologies into future hardware products which have not yet been introduced, MacCentral reports. 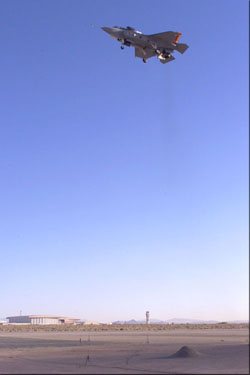 "Again, the X-35B performed flawlessly, and the vertical landing was extraordinarily smooth and easy," said Simon Hargreaves of BAE SYSTEMS, chief test pilot for the X-35B. "We were in familiar territory, since we had already demonstrated the airplanes solid and stable hovering ability numerous times last month. The aircrafts shaft-driven lift fan propulsion system produces enormous amounts of power, even in the California desert with its high elevation and hot temperatures.

Late last month, the aircraft completed 17 vertical takeoffs, hovers and vertical landings at the Lockheed Martin plant in Palmdale, Calif. On July 9, it performed a STOVL conversion, a mid-air refueling and supersonic dash in the same flight.

"The X-35B has now successfully completed short takeoffs, transitions between wingborne and jet borne flight, hovers, vertical landings, and has flown supersonic, all profound achievements that literally define the baseline flight requirements of the Joint Strike Fighter," said Tom Burbage, executive vice president and general manager of the Lockheed Martin JSF program. "The aircraft performed all of these missions without any modifications  thats truly a testament to the talent and hard work of the Lockheed Martin X-35 team."

The X-35B features a unique propulsion system in which a drive shaft from the Pratt & Whitney JSF119-611 engine (common to all Lockheed Martin JSF variants) turns a counterrotating lift fan that produces cool-air lifting force during STOVL operations. The Rolls-Royce fan, actuated by a clutch that can be engaged at any power setting, works in concert with an articulating rear duct and under-wing lateral-control nozzles to lift the aircraft with nearly 40,000 pounds of vertical force. Because the fan amplifies the engines power, the engine is able to run cooler and with less strain, increasing reliability and extending service life. The lift fan provides the propulsion system with about 15,000 pounds more thrust than the engine alone could generate. 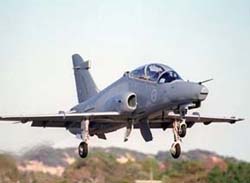 "This latest milestone achieved by the project team has reinforced that the Hawk Lead-in Fighter provides an outstanding state-of-the-art fast jet training capability, and that the partnering between the Commonwealth and BAE SYSTEMS continues to be a real success," said Mr Mark Parkinson, programme director Australia - Hawk, BAE SYSTEMS.

The 31st Hawk Lead-in Fighter marked A27-34 will now join the 18 Hawks based at RAAF Base Williamtown, NSW and the 12 aircraft at RAAF Pearce. The first TWSTS was installed in March at RAAF Williamtown and was developed by BAE SYSTEMS in South Australia as part of a suite of training aids for the Hawk Lead-in Fighter.

In addition, BAE SYSTEMS Australia is progressing the certification of the air-to-air refuelling (AAR) capability for the Hawk Lead-in Fighters . The RAAF's fleet of Lead-in Fighters were delivered with the AAR system and are now being cleared for operational use. AAR has been a baseline requirement for the Lead-in Fighter since the contract was awarded in 1997.

The Hawk Lead-in Fighter Project, managed by the Australian Defence Materiel Organisation, was established to provide and support an outstanding state-of-the-art fast jet training capability for the RAAF. A major feature of this contract is that it combines the acquisition of 33 advanced fast jet trainers with Deeper Maintenance Support throughout the anticipated 25-year life of type by Australian industry. The contract value is around A$850 million.

US Does Not Intend To Violate ABM Treaty
Answering questions on missile defence and the Anti-Ballistic Missile (ABM) Treaty at a 16 July congressional hearing, Defense Secretary Donald Rumsfeld said the United States does not make a practice of violating treaties "and we certainly don't intend to here."

President Bush and Russian President Vladimir Putin have already agreed that there will be discussions between the United States and Russia "in the weeks and months immediately ahead," Rumsfeld told members of the House Appropriations Committee during testimony on the amended defence budget.

Bush "has announced publicly, unambiguously, and repeatedly that he intends to find and establish some sort of a framework beyond the ABM Treaty, which is a 30-year old treaty that "was designed explicitly to prohibit ballistic missile defence," Rumsfeld said.

Bush intends to implement a ballistic missile defence "to protect the population centres of the United States as well as of our friends and allies and our deployed forces," according to the secretary, who spoke following a successful ballistic missile interceptor test that occurred over the central Pacific Ocean on 15 July.

To fulfil the president's objective, Rumsfeld said "you are going to have to find a way around that treaty" and that is what the discussions with the Russians intend to do. Initial discussions already have taken place at the presidential and foreign affairs and defence ministerial levels, he said, and "we intend to be in close discussion with them" in the near future.

During an 11 July background briefing at the Pentagon two senior Defense Department officials discussed missile defense and ABM Treaty issues. These issues "are all in compliance review (by the ABM Treaty Compliance Review Group) and we'll have to let that process decide whether or not we have a problem" with future missile defence tests, "but until now we haven't had a problem with treaty compliance," one official said.

The newly restructured missile defence programme is based upon the premise that the United States will build the best missile defence possible "without the consideration of ABM compliance issues," the official said. Now that the programme has been laid out, it is up to the Compliance Review Group to pass judgement on each of the next tests as they are scheduled, he explained.

The next test will likely occur in October. If the new tests repeat an old test then compliance is not an issue, the official said. "But if it's testing a new capability, a new deployment platform, or something like that, they have to assess those capabilities," he said. In evaluating each future test, the Review Group must look at technical and policy issues associated with it as well as the legal ramifications, he added.

"We will comply with the law. The Treaty stands," the official said. When a test bumps up against the ABM Treaty "we will tell the system when that spot is reached," he said, and then policy guidance will be provided to the programme managers; "we'll be told what to do."

During the budget hearing, Rumsfeld was asked to justify his fiscal year 2002 request for $8.3 billion ($8,300 million) on missile defence, which is about a 60 percent increase over last year after inflation is taken into account. He reminded committee members that the United States already has been targeted by a ballistic missile in February 1991. Twenty-eight Army Reservists were killed and another 99 injured after an Iraqi Scud missile was launched against a dormitory in Dhahran, Saudi Arabia during Operation Desert Storm.

The threat is real and growing, the defence secretary told Committee Chairman Jerry Lewis. The Intelligence Community agrees that the total number of ballistic missiles is increasing every year, he added, and so is their destructive power.

While the Pentagon's request for missile defence funds has increased, Rumsfeld emphasised that the money is being sought for research, development and testing. "It is not a deployment budget," he said. He also noted that missile defence spending currently represents less than 2.5 percent of the total US defence budget and "the non-theatre ballistic missile proportion of it is about 1.5 percent of the defence budget." The administration has asked for $328.9 billion ($328,900 million) in fiscal year 2002 money for defense.